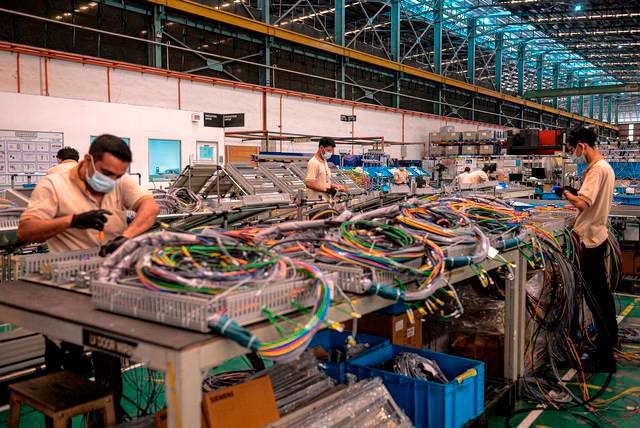 Employees of an electronics factory adhere to the Standard Operating Procedures (SOP) set by the government to curb the spread of COVID-19 while working at the factory around Kota Damansara. BERNAMApix

KUALA LUMPUR: Priority should be given to strengthening the economy and restoring more favourable business conditions, given the weak domestic and external environments brought about by COVID-19, the Federation of Malaysian Manufacturers (FMM) said.

“This situation is worrying as the debt servicing burden is significant at 17.2 per cent of total projected revenues for the year with no stable inflow but high outflows of government expenditure due to higher allocation for Budget 2022 stimulus and recovery initiatives to help the country recover from the impact of the pandemic and movement control order,” he said in a statement today.

In this regard, FMM welcomes Finance Minister Tengku Datuk Seri Zafrul Tengku Aziz’s recent announcement on the possibility of reinstating the Goods and Services Tax (GST) by reviewing the weaknesses of the existing sales and services tax (SST) system, as well as improving upon the former GST system implemented in 2015.

Soh said FMM has been a strong supporter of the GST as the tax regime was a more transparent and effective tax compared to the SST, with over 160 countries adopting it due to its fair tax structure.

“More importantly, prices of Malaysian exports will become more competitive on the global stage as no GST is imposed on exported goods and services, while the GST incurred on inputs can be recovered along the supply chain,” he noted.

Based on a survey carried out by FMM on the reintroduction of the GST in May 2020, 499 companies which responded to the survey registered their strong support for the GST to replace the current SST.

The manufacturers have also proposed improvements to the GST to be more consumer- and business-friendly such as reducing the GST rate to 3.0-4.0 per cent to boost business conditions, which would lead to higher investments and employment opportunities, as well as higher disposable income for the people.

The survey findings proposed improvements such as ensuring proper mechanism is in place to monitor price control and anti-profiteering in the market when the tax system is reintroduced. - Bernama