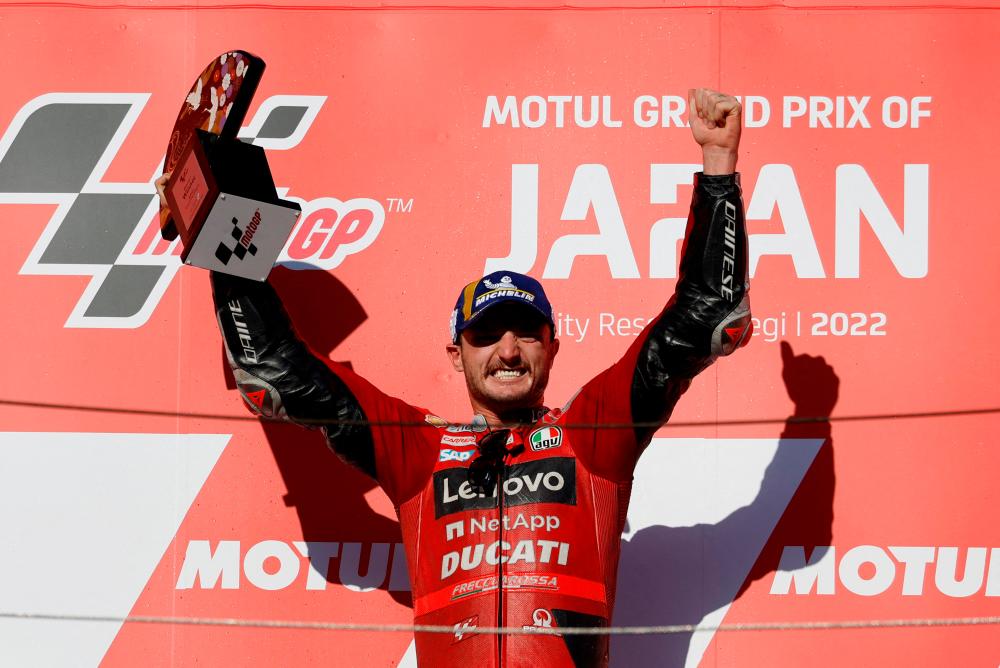 MOTEGI: Australia's Jack Miller (pix) powered to an emphatic victory at Motegi on Sunday in the first Japanese MotoGP since 2019 on a day to forget for the title contenders.

The Ducati rider stormed from seventh on the grid to clinch his fourth MotoGP victory, taking the chequered flag by more than three seconds from South Africa's Brad Binder. Spain's Jorge Martin was third.

Reigning world champion and current leader Fabio Quartararo on a Yamaha was best-placed of the trio of title hopefuls when he came eighth, extending his lead to 18 points with four races to go.

But his chief rival Francesco Bagnaia had a nightmare, crashing on the last lap as he attempted to overtake the Frenchman.

Aleix Espargaro also fell further behind in the title chase after suffering a mechanical problem before the race started.

After heavy rain and storms on Saturday, the first Japanese MotoGP in three years because of the pandemic unfolded under hot and sunny skies.

Spain's Espargaro, who qualified sixth on the grid, frantically dumped his Aprilia in the pit lane and jumped on his spare bike after a problem right at the start of the warm-up lap.

He had his head in his hands and found himself fighting from last place after coming out of the pits well adrift of the field.

Six-time MotoGP world champion Marc Marquez had taken advantage of the wet conditions on Saturday to take pole position on his Honda for the first time in three years but he was quickly swallowed up at the start and finished fourth.

Binder, also on the front row, flew past the Spaniard to grab the lead on the first corner before Martin took over at the front.

He was soon reeled in by Miller, who surged through the field and into the lead on lap three.

The 27-year-old Miller then set a succession of fastest laps as he opened an unassailable gap at the front.

Japan rider Takuya Tsuda suffered a fiery exit when he quickly hopped off his Suzuki with flames appearing underneath the engine, momentarily bringing out yellow flags.

In the Moto2 race earlier, Ai Ogura closed the gap to two points at the top of the world championship after becoming the first Japanese rider to win on home soil since Hiroshi Aoyama in 2006.

Spain's Izan Guevara triumphed in the Moto3 race to stretch his lead in the standings.-AFP