Ministers haggle through the night to salvage WTO deals 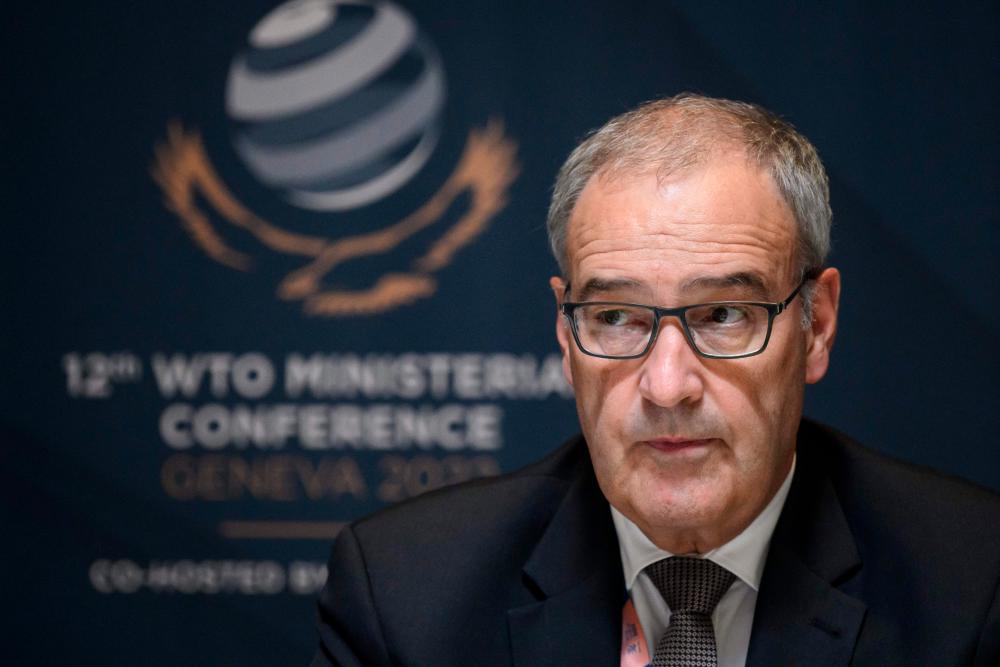 Parmelin looks on during a press conference at the World Trade Organization headquarters during the 12th WTO Ministerial Conference in Geneva yesterday. – AFPpix

GENEVA: Ministers were frantically haggling through the night into today at the World Trade Organization (WTO) in a bid to salvage deals on food security, fishing and combating Covid-19.

The global trade body’s 164 members added on an extra fifth day of talks to try to break the deadlock gripping the WTO headquarters here.

But despite relaxing their original yesterday deadline, countries were trading concessions through the early morning hours to cobble together a wide-ranging set of results.

Countries have hit a brick wall trying to secure each separate deal on its own merits, so are now making tit-for-tat offers in an attempt to keep them all afloat.

“They’re looking at a broad package: what can be achieved, trade-offs in different areas,” a Geneva trade official told reporters.

“It’s basically, ‘what can I get here, (in exchange) for this’,” the official said.

“We’re into the real bargaining part of the meeting. This is where all the action is happening and hopefully where some deals are going to be struck.”

US Trade Representative Katherine Tai was seen heading in and out of the late-night talks, while a giant tray of sandwiches was brought in to keep the deal-makers going.

He said the talks had run out of juice – but only fruit juice, rather than energy.

The WTO is hoping to prove it still has a role to play in tackling big global challenges.

WTO chief Ngozi Okonjo-Iweala, who took over in March 2021, has hinged her leadership on breathing new life into the sclerotic organisation.

“Progress is being made but it needs a little more work and more time,” the director-general said. “It requires that we work and work nights; whatever it takes.”

The last WTO ministerial conference, in December 2017 in Buenos Aires, was widely considered a flop, closing without a major agreement and Okonjo-Iweala wants no repeat.

The global trade body only takes decisions by consensus among all 164 members, making deals all the harder to conclude.

Okonjo-Iweala was hoping to pull off a coup by securing a long-sought deal on curbing harmful fishing subsidies.

Negotiations towards banning subsidies that encourage overfishing and threaten the sustainability of the planet's fish stocks have been going on at the WTO for more than two decades.

Diplomats say a deal is closer now than ever before.

But India threw a spanner in the works late Tuesday, insisting it would not sign up without a 25-year exemption – far longer than many are comfortable with.

Some emerging from the negotiating rooms are blaming Indian intransigence on not just fisheries but across the board.

Citing their “destructive tactics”, one diplomatic source close to the negotiations said: “The question is are they really going to pull the whole edifice down, or whether they’re willing to go along with the views of the vast majority of members.”

On fishing, the source added: “Now is the time ... civil society wants this, fishing communities want it, and our fish need it.”

WTO reform, agriculture and e-commerce deals are also on the table.

“There are things that are going in the right direction and others that unfortunately are not progressing very much,” France’s foreign trade minister Franck Riester told reporters before the all-night talks, with health issues looking among the most promising.

One pandemic-related text seeks to tackle supply constraints faced by certain countries in getting hold of Covid-fighting tools.

Ministers are also discussing the possibility of imposing a temporary waiver on Covid-19 vaccine patents.

But some countries that host major pharmaceutical companies, like Britain and Switzerland, are finding some of the draft wording problematic.

“The proposal on the table is intended to save the reputation of the WTO but it will not save a human life from the pandemic,” demonstration organiser Deborah James told AFP.

Swiss economy minister Guy Parmelin insisted he remained against a wide-ranging waiver, adding: “Patents have not slowed access to vaccines – quite the opposite”. – AFP