Musk says he has US$46.5b financing for Twitter buyout bid 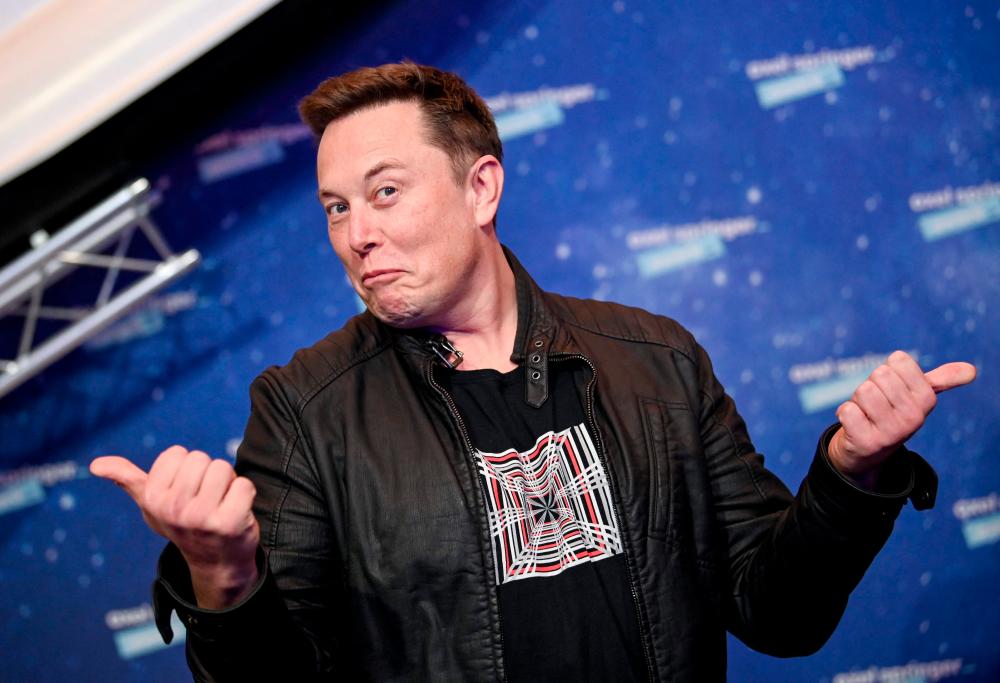 NEW YORK: Elon Musk has lined up US$46.5 billion (RM199.5 billion) in financing for a possible hostile takeover of Twitter and is “exploring” a direct tender offer to shareholders, according to a securities filing released yesterday.

Musk’s filing pointed to a US$13 billion debt facility from a financing consortium led by Morgan Stanley, a separate US$12.5 billion margin loan from the same bank, as well as US$21 billion from Musk’s personal fortune.

The Tesla chief, who has been rebuffed by the Twitter board, is “exploring whether to commence a tender offer ... but has not determined whether to do so at this time”, the filing said.

Still, shares of Twitter did not rise significantly, suggesting scepticism that a deal will happen.

The world’s richest man on April 14 launched an unsolicited bid to buy Twitter for US$54.20 a share, saying the influential microblogging platform had fallen short of free-speech imperatives.

The following day, Twitter moved to defend itself against the US$43 billion takeover effort, announcing a “poison pill” plan that would make it harder for the billionaire to get a controlling stake in the social media company.

Despite Musk’s great wealth, the question of financing had been seen as a potential stumbling block because much of Musk’s holdings are in Tesla shares rather than cash.

Shares of Twitter fluctuated yesterday, finishing at US$47.08, up 0.8% but far below the US$54.20 price in Musk’s offer. That suggests investors remain sceptical a deal will happen, said Eric Talley, a professor a Columbia Law School specializing in corporate law and mergers.

“I think a lot of people feel like either the board isn’t going to start talking to Elon Musk, or that Elon Musk might just decide to chase a different rainbow the day after tomorrow, and this will all have been a big fever dream,” Talley told AFP.

Analysts noted that Twitter’s poison pill poses a big challenge to any effort not backed by the board.

The defence established by Twitter kicks in if an investor buys more than 15% in shares without the directors’ agreement. Musk holds 9%.

The manoeuvre makes it harder for a buyer to build too big of a stake without board approval, by triggering an option that allows other investors to buy more of a company’s shares at a discount.

“Despite the filing, we don’t believe it puts Musk any closer towards reaching a deal,” Zino said.

“We think Musk could look to increase his stake closer to 15% to put additional pressure on Twitter, but we think he will ultimately need to have constructive conversations with the board to be successful.”

Musk’s efforts have raised hopes about the commercial potential of Twitter, which has struggled to achieve profitable growth despite its influential spot in culture and politics.

But the polarising Tesla CEO’s campaign also has sparked concern among technology and free-speech experts who point to Musk’s unpredictable statements and history of bullying critics, which contradict his stated aims.

Under Parag Agrawal, who took over as Twitter CEO late last year, the company has made progress on new monetization features, such as subscription products, said a note from Truist Securities, adding that “short term, Musk’s involvement at this stage runs the risk of disrupting those efforts”.

Talley noted that Musk thus far has not released a “creative revenue generation plan”, adding that Musk may have such a document, “but he certainly hasn’t unveiled it”. – AFP