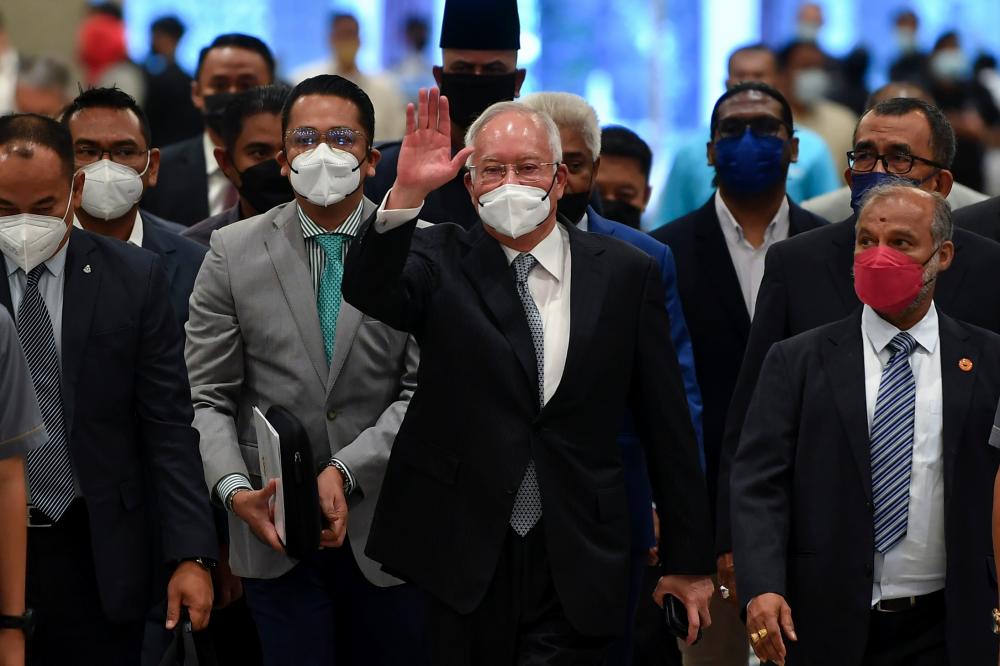 According to lawyer Mohamed Haniff Khatri Abdulla, the pardon process will take time because it is subject to the discretion of the Yang di-Pertuan Agong.

“All individuals found guilty and sentenced are entitled to seek a royal pardon under Article 42 (1) of the Federal Constitution.

“However, they have to go through a prison sentence first for a certain period, then the Pardons Board, in regular meetings, will ask for reports from the prison to be prepared and advised to His Majesty, including a written report from the Attorney-General before the pardon is granted,” he said when contacted by Bernama today.

Yesterday, the Federal Court upheld Najib's conviction and sentence of 12 years in jail and a fine of RM210 million, or five years in prison if he failed to pay the fine, for misappropriating SRC International Sdn Bhd's funds amounting to RM42 million.

Mohamed Haniff Khatri said Najib needs to file the application within 14 days starting from the date of the final appeal decision, to ensure that he will not be disqualified as Pekan member of Parliament (MP).

Commenting further, he said that Article 48 of the Federal Constitution states that MPs and assemblymen will automatically be disqualified when they are sentenced to 12 months imprisonment or more, or fined not less than RM2,000.

“If Najib is still interested in holding the Pekan parliamentary seat, it is his responsibility to file or apply for a royal pardon within 14 days,” said Mohamed Haniff.

However, the lawyer said that Najib also faced several other cases in court, including 1Malaysia Development Berhad (1MDB), the amendment of the 1MDB audit report and the case related to the International Petroleum Investment Company (IPIC), which made it difficult for him to obtain a pardon.

“It is unreasonable from a practical point of view to get clemency for the SRC case, when he still has other cases in court, and some are still at the trial stage,” he said.

Sharing a similar view is lawyer Fahmi Abd Moin, who said that the former prime minister can seek a pardon through the Pardons Board.

“An application to obtain a pardon can be filed by Najib through a family member, his lawyer or his (Najib's) representative, but it needs to comply with certain conditions under Article 42 (1) of the Federal Constitution.

“However, this pardon is not granted automatically because he (Najib) has to serve a prison sentence for a certain period of time first,” said the lawyer, adding that the next process was for the King to seek advice of all members of the Pardons Board before making a decision.

Meanwhile, another lawyer, Datuk Geethan Ram Vincent, said that Najib can seek a royal pardon, but he needs to still face other cases such as 1MDB and the audit report's trial.-Bernama