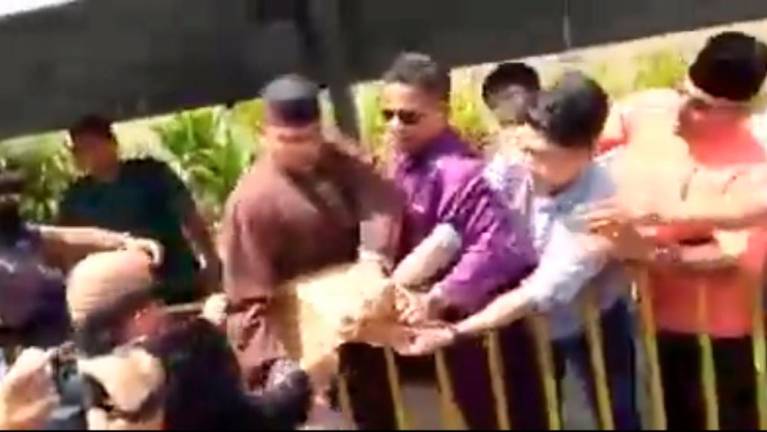 Several youths manhandled by supporters of Datuk Seri Najib Abdul Razak outside a restaurant near Universiti Malaya, on March 22, 2019.

KUALA LUMPUR: Police are probing the confrontation between supporters of former prime minister Datuk Seri Najib Abdul Razak and university students under Section 160 of the Penal Code for committing affray.

The section outlines punishment for committing an affray, which carries a jail term of up to six months, or a fine of up to RM1,000, or both.

A group of seven Universiti Malaya students on Friday staged a protest across the street from a restaurant where Najib was giving a talk near Bangsar here.

The students were then confronted by a group of Najib’s supporters, led by Umno supreme council member Datuk Lokman Noor Adam.

He said police received 12 reports relating the incident so far.

“At around 3.45 pm on Friday, a total of seven men, who were students of a public higher education institute, held a silent protest there.

“Najib’s supporters were provoked, leading to a bout of pushing and shoving between both parties,“ he said.

He added that once police were alerted about the incident, they came to the scene and took control of the situation.

“All the students were taken to the Pantai police station and had their statements recorded.

“So far, 12 police reports have been made by the parties involved and 10 witnesses have had their statements recorded to help with investigations of this case,“ Mazlan said.

He said action will be taken against those who do not comply with the law.