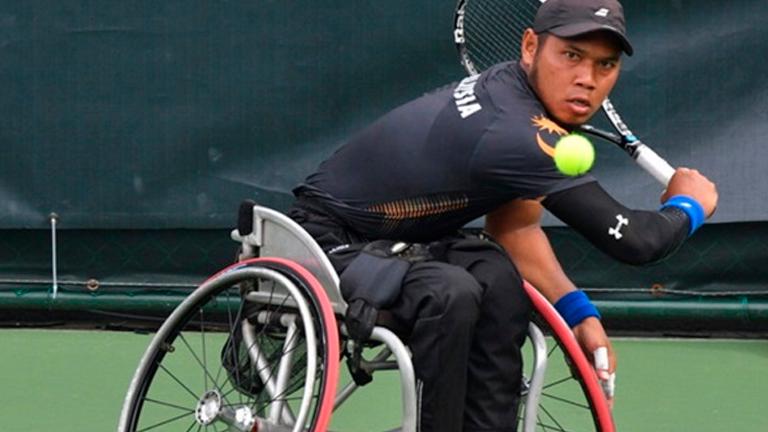 KUALA LUMPUR: A new wheelchair acquired the end of last year has fuelled the spirits of para athlete Abu Samah Borhan (pix) to do his best and go further at the Tokyo Paralympics to be held from Aug 24 to Sept 5.

The 36-year-old wheelchair tennis player pointed out that the “machine”, which was made in Japan through a special allocation from the National Sports Council (NSC), has had a big impact on his performance, including when he emerged runner-up at the 2021 MTA Open in Turkey in April after losing 5-7, 3-6 to Japan’s Tokito Oda in the final.

Abu Samah, who won gold at the 2017 Asean Para Games in Kuala Lumpur, also qualified for the semi-finals of the Mega Saray Open in Turkey that same month to help him move up from 42nd to 37th in the world, which was his best position in April.

Abu Samah, who hopes to improve his wheelchair skills, especially in terms of movement and agility, when he leads the country’s challenge at the Ariake Tennis Park, which is the venue for wheelchair tennis at the Tokyo Paralympics.

“There are many improvements the to wheelchair specially designed for me, where the tyre size is a little bigger, at size 27 instead of 26, and the seat is designed is accommodate my body size.

“So far, I am comfortable using it and I hope it can help me in Tokyo,” he said when met by Bernama today.

The father of a 10-year-old boy also hopes that the draw, to be held on Aug 25, would be in his favour so that he could avoid the top seeds in the early rounds.

Born in Tanjung Malim, Perak, Abu Samah is also determined to improve on his performance when he made his Paralympic debut in Rio de Janeiro, Brazil, five years ago.

Having been eliminated by eventual silver medallist Alfie Hewett of Great Britain in the first round in the 2016 Rio edition, Abu Samah hopes to at least advance to the third round in Tokyo.

Abu Samah, who broke his spine in a road accident in 2006, admitted that it would be difficult for him to win a medal at the Tokyo Paralympics but that won’t stop him from giving it his best shot. – Bernama