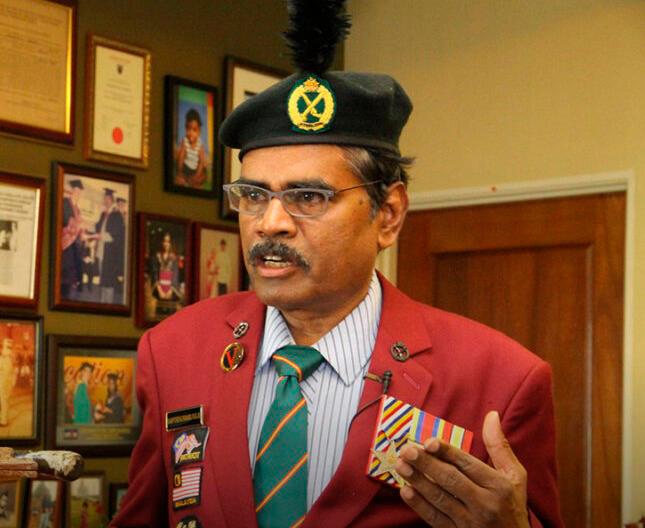 Panir Chellvum, 67, said the most memorable experience of his life was his participation in the ‘Ops Pagar’ joint operations by MAF and the police to hunt down a band of communists in Gerik, Perak, on Feb 14, 1977.

Recounting his experience to Bernama recently, Panir Chellvum said he was then a 22-year-old Second Lieutenant leading a five-man group assigned to ambush the communists based on ‘category A’ police intelligence.

Driven by the desire to defend the country’s sovereignty, his team moved fearlessly in the dark of the night into the operation area deep in the jungles.

But as they were laying claymore mines at the location, the team were surprised by a ray of torchlight shone from behind. One of his squad members immediately opened fire.

It resulted in a bloody 30-minute gun battle with the enemy group numbering about 15.

“Amid the din of the gunfight, we heard shouts of ‘cau’ in Chinese from the enemy asking their members to flee, which prompted us to stop shooting. Then we heard crackling sounds of dried leaves being stepped on in front of us. Instinctively, I knew the enemies were moving closer to our location.

“When the noises drew near us, I hurled five grenades towards the direction of the sound, and four of them exploded.

“They fled and I immediately contacted the artillery fire team to provide us ‘illuminating rounds’. I saw many sling bags of the enemy scattered about and one communist member lying on the ground in front of me,” he added.

Panir Chellvum rushed at the enemy and opened fire, killing him. He then returned to his original position and stood guard until the next morning.

When patrolling the area surrounding the battle scene the following day, Panir Chellvum captured a communist insurgent who was in fear after being deserted by his friends. On questioning, the captive told Panir Chellvum that he guy he killed was his leader.

For his success, Panir Chellvum was awarded the Pingat Gagah Berani in 1978.

Meanwhile, former police officer Charan Singh Hajara Singh, 75, said the ‘Lada Pedas’ operation in Sarikei, Sarawak, in 1970 was the most unforgettable event of his more than 30 years’ service in the force.

Charan, who was then with the Signals Unit, had the honour of finding the answer to how his platoon was ambushed by the enemy.

“My commander and team were in deep discussion about the attack on our platoon. Three booby traps had gone off. Curious to find out more about the attack, I bravely climbed the side of a hill near where the explosions occurred.

“I then saw three trenches and cooked rice which was quarterly eaten in kerosene tins. Over there, there was a battery with a wire at one side that was already connected and the other wasn’t,“ he said.

Based on the tactical operation knowledge he learned in the force, Charan decided to connect the black wire on the battery, and thankfully, everything went well and he emerged unscathed.

“Clear pot, two of them exploded. The enemy had planted five booby traps, about four yards apart,” he said.

After the operation, Charan and his team returned to their base in Ipoh/Ulu Kinta in Peninsular Malaysia, from where they conducted several operations against the communists.

Charan’s last posting was in Kuala Lumpur before he retired in 1995. He had also served with the Marine Police in Langkawi and Special Branch in Alor Setar.-Bernama