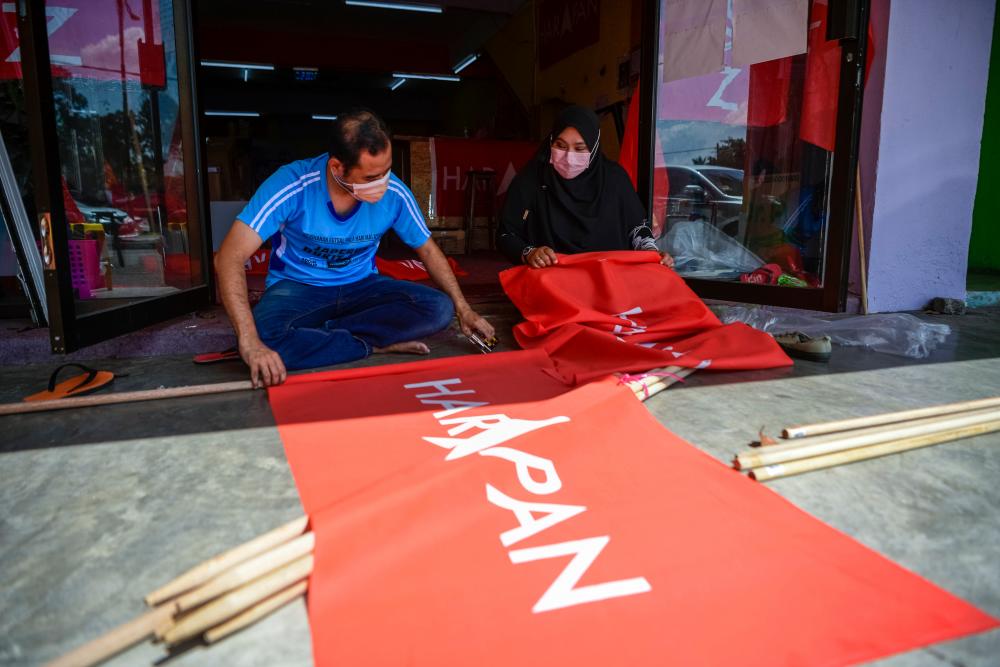 In a media conference after the nomination of candidates today, he called on all parties involved in the election to comply with the standard operating procedure (SOP) to prevent the spread of Covid-19 for Melaka election which is listed in EC’s portal and according to him all the SOPs have been approved by the Ministry of Health (MOH) yesterday.

He said among the banned activities during Melaka election are house-to-house visits, walkabouts and the distribution of pamphlets to members of the public face-to-face.

Meanwhile, based on his statement in the portal, the SOP stipulated that candidates or party machinery are allowed to put up banners and buntings during the election as well as distribute pamphlets in the post box of residents by observing physical distancing of at least one meter. It is also limited to a group of three persons for the activity.

He said apart from that, the campaign could also use television networks, local newspapers and candidates should utilise technology for the campaign in line with the new normal practised following the Covid-19 pandemic.

“Candidates are also subject to Election Offences Act 1954 (Act 5 ) during the campaign and any forms of campaigns via the mass media on polling day is not allowed,” he said.

Only candidates who have police permits are allowed to campaign on vehicles using loud hailers at the stipulated time and place to deliver ceramah.

Abdul Ghani said only one committee room (party operations room) is allowed to operate for each candidate of a constituency during the campaign period with a limit of 50 per cent capacity from the space available while observing physical distancing and mini operations room are not allowed.

Apart from that. all involved should also take RTK Ag self-test every two days during the campaign with the cost borne by themselves and the results of the tests should be uploaded into the MySejahtera application.

Apart from that, party meetings are limited to only two hours and the frequency not exceeding four times a week with the presence of fully vaccinated individuals and are subject to 50 per cent capacity of the space with physical distancing.

“Party meetings meant meeting seating arrangement and not as sessions for talks or briefings or whatever forms of physical campaign which is not allowed,” he said.

Abdul Ghani said media conference after party meeting is allowed with the presence of individuals who attended the meeting and journalists who have been fully vaccinated.

For early voting and on polling day, party or candidate agents who have completed their duties or voters who have finished casting their votes should promptly leave the polling station and voters should check voting information through the mySPR Semak application or Semakan Daftar Pemilih SPR portal.

For voters with symptoms such as coughs, sore throat or having difficulty in breathing or body temperature exceeding 37.5 degrees Celsius, should be isolated and vote at a separate tent.

Voters who are positive for Covid-19 would not be allowed to go out of the place of treatment such as hospital, quarantine centre or house as they could bring the infection to the people while voters who are patients under investigation (PUI) and person under surveillance (PUS) and wish to vote would be allowed with the approval of the district health officer.

Apart from that, voters in areas under Enhanced Movement Control Order (EMCO) need to undergo RTK Ag test 24 hours before the voting date and only voters who are tested negative could get police approval to go out to vote.

For the official tallying of votes, only five supporters for the winning candidate (unofficial result) and three supporters from other candidates are allowed to be present and the permission to enter the vote tallying centre would be informed and entry pass would be distributed by the Returning Officer before the election result announcement is made.

“Victory celebrations by candidates are not allowed,” he said.-Bernama