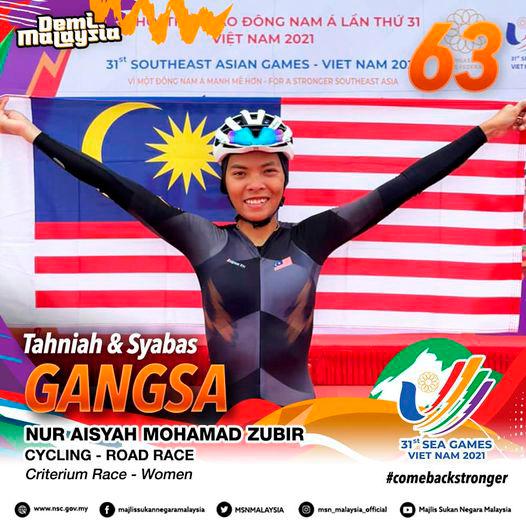 HANOI: National women’s cyclist Nur Aisyah Mohamad Zubir proved her mettle when she won the bronze medal in the criterium event at the 31st SEA Games in Hoa Binh Province, about 75km from here, today.

The 2021 national champion, who is making her debut in the SEA Games, finished the 29.6-kilometre race in a bunch finish in a time of 46 minutes 39 seconds.

The race was won by Thai rider Jutatip Maneephan while host cyclist Nguyen Thi That won the silver medal.

Meanwhile, a mistake at the last minute dashed the hopes of national sprint champion Mohd Harrif Saleh to secure a medal for Malaysia the men’s 44.4km criterium.

Commenting on Nur Aisyah’s success in winning bronze, national cycling squad manager Firdaus Arshad said the 25-year-old’s feat was unexpected as their target in Hanoi was in the highway events, both in the women’s and men’s categories.

“She deserved to win (the bronze). If you were to look at Aisyah’s current performance, she certainly has the ability to create something (at this SEA Games,) ”he said.

Meanwhile, he hoped that the national cycling squad could produce positive results in the highway cycling events this Sunday (May 22).-Bernama