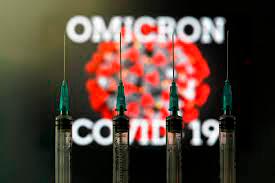 LONDON: A further 86 cases of the Omicron Covid variant have been reported in Britain, taking the total to 246, British health authorities confirmed Sunday.

This compares with a total of 160 on Saturday, an increase of more than 50 per cent, according to the UK Health Security Agency (UKHSA).

Britain registered 43,992 new Covid-19 infections, bringing the total number of coronavirus cases in the country to 10,464,389, according to official figures released on Sunday.

The latest data came as British Health Secretary Sajid Javid said all international arrivals to Britain, including children over the age of 12, will need to take a pre-departure test from 0400 GMT on Tuesday. He added that they must be taken a maximum of 48 hours before departure.

In addition, from 0400 GMT on Monday Dec 6, Nigeria will be on the red travel list. It joins several southern African nations which were put on it after the Omicron variant was first detected late last month.

“I think it’s too late to make a material difference to the course of the Omicron wave if we’re going to have one,“ Xinhua quoted professor Mark Woolhouse, a member of the Scientific Pandemic Influenza Group on Modelling (Spi-M), as telling the BBC, when asked about the new travel rules.

To bring life back to normal, countries such as Britain, China, Germany, Russia and the United States have been racing against time to roll out the coronavirus vaccines.-Bernama

3.Decision to call for defence or acquit Zahid to be known tomorrow

4.UK lawmaker says she was sacked from job due to her ‘Muslimness’