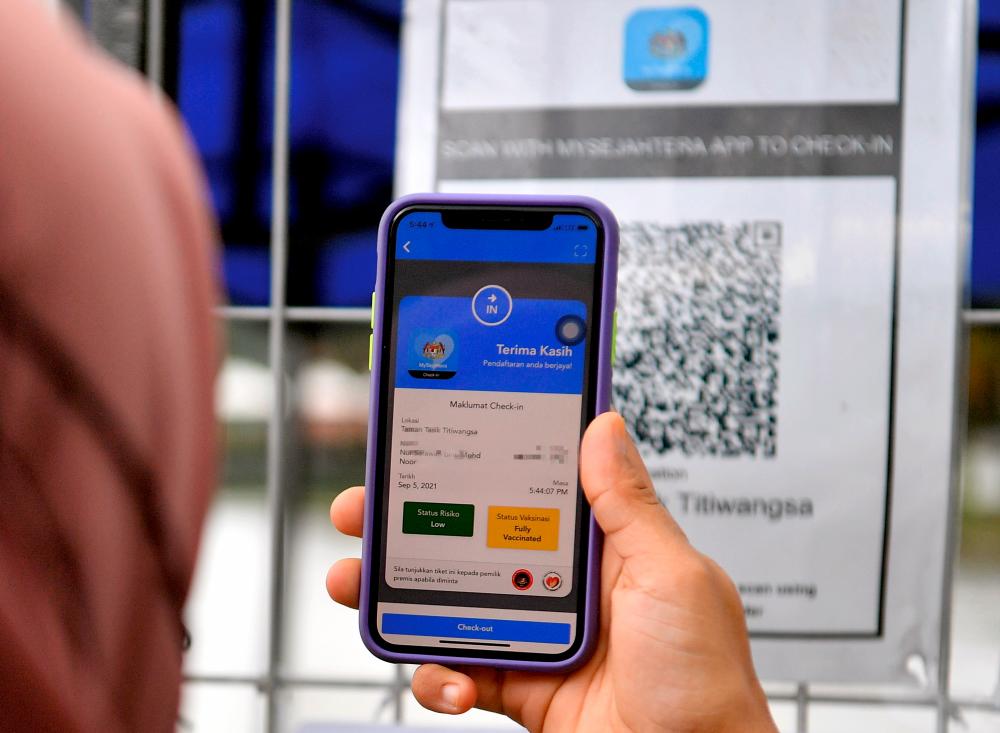 Personal information of MySJ Trace users will not be compromised. – BERNAMAPIX

PETALING JAYA: In an age where technology is tearing down walls, privacy has become a commodity that is facing increasing risks.

As such, it was not for nothing that the government introduced the Personal Data Protection Act (PDPA) more than a decade ago.

It therefore comes as no surprise that breaches of privacy ranked high in the list of concerns when the government launched the MySJ Trace last week.

The new update to the MySejahtera app removes the need for one to check out when leaving a business premises, but it enables the government to keep track of a user’s movements.

However, Multimedia University lecturer and social media expert Adlene Aris Majid pointed out, the choice of whether to download the update remains with the user.

MySJ Trace is another initiative by the Health Ministry in its effort to curb the spread of Covid-19.

This has become even more pertinent now with the appearance of the Omicron variant, which is said to be many times more virulent than the Delta variant.

For those who are tech-savvy, it is a feature that adopts a “community-driven” approach. Users interact with each other by having their devices exchange proximity information.

This is made possible with the use of Bluetooth Low Energy technology.

According to a list of guidelines provided by the ministry, when a MySJ Trace user is identified as Covid-19 positive, through a home-test kit for example, the user is required to upload information on all interactions within the previous 14 days to a secure database.

This will enable the ministry to notify all others who have been in close proximity through MySejahtera.

However, MySJ Trace will not collect data on the user’s location although Android device users will have to activate the location feature when using Bluetooth.

Adlene said the PDPA should also apply when it comes to the MySJ Trace.

“Just like it is for businesses in commercial transactions, it is the responsibility of the government to ensure that any data collected through MySJ Trace is secured,” she told theSun, adding that she was confident that the requirement will be met.

“The government’s effort to develop this feature must have gone through numerous stages of research. Several related agencies and experts would have been involved.”

She said users have the option to deactivate the feature if they are not comfortable using it. There is also an option to read the feedback from other users.

Adlene commended the government for using technology in its effort to curb the spread of Covid-19. However, she also pointed out that it was not perfect.

“Anything man-made has a flaw, including the MySejahtera application, and since we are already moving into the third year of managing the pandemic, there is still room for improvements,” she said.

She added the ministry should also use its resources to convince people that the feature is safe to use.

“I believe to this day there are still some people who are reluctant to use the MySejahtera app for fear of their privacy being breached,” she said.

When announcing the introduction of MySJ Trace on Boxing Day, Health Minister Khairy Jamaluddin gave an assurance that users will remain anonymous on the app.

He also pointed out that the feature is highly recommended when the user is in an indoor public setting, where the threat of infection is higher.

The government has also given an assurance that any data collected, including the unique user ID, the device’s operating system, time of encounter and the received signal strength indicator, will only be used in accordance with its information security standard. Iran police to oppose protests with ‘all their might’ Iran police to oppose protests with ‘all their might’

3.Iran police to oppose protests with ‘all their might’

4.One killed in Belgium anti-terror raids