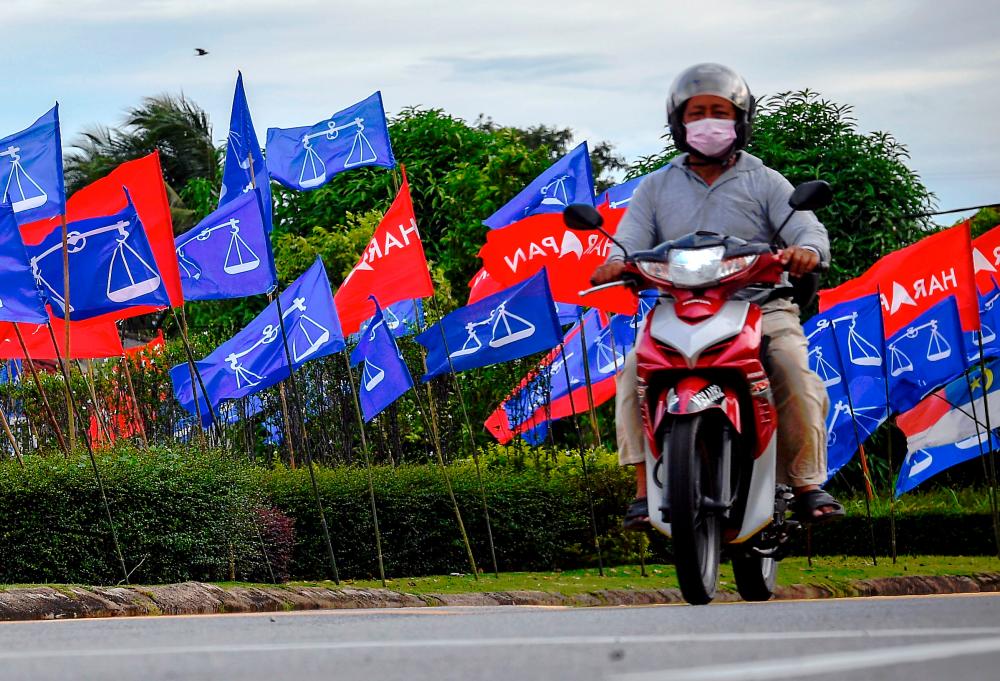 Independents are not expected to do well in the upcoming Johor polls. – BERNAMAPIX

PETALING JAYA: The Johor state election will be a fight among the “big boys” with Barisan Nasional (BN) as the frontrunner.

Based on current sentiments and the results of the Nov 20 Malacca polls as well as the Dec 18 Sarawak state election, analysts said the Johor polls are BN’s to lose.

Nusantara Academy for Strategic Research senior fellow Dr Azmi Hassan said that apart from the “Big Three”, a few others will throw their hats into the ring this time.

“For a start, there will not be too many independent candidates. People would have learned from the Malacca experience that independents do not do well in elections,” he told theSun.

He added that unless a candidate has the backing of a party, he is most likely to even lose his deposit.

A total of 22 independents jostled with candidates from Perikatan Nasional (PN), BN and Pakatan Harapan (PH) for the 28 seats in the Malacca state assembly last year. None of them won, and most of them lost their deposits.

The PN-led government in Johor sought the consent of its ruler Sultan Ibrahim Sultan Iskandar to dissolve the state assembly after its majority was whittled down to only one seat.

The Sultan consented to the dissolution on Saturday, paving the way for snap polls for which the date has yet to be decided.

Azmi said BN is the frontrunner in the Johor polls not because it is strong but because rivals PN and PH are weak.

“But whether it will win big like it did in Malacca is left to be seen.”

Azmi expects PH to pose a bigger challenge to BN.

He said the component parties in PH, namely PKR, DAP and Parti Amanah Negara, would have learned from the debacle in Malacca and would present a united front in Johor.

“This will make a big difference now that they are no longer at loggerheads with one another.”

Malaysian Council of Professors senior fellow Dr Jeniri Amir said that based on the Malacca and Sarawak state polls, BN has the upper hand.

In Sarawak, Gabungan Parti Sarawak, aligned to BN, won by a landslide.

Jeniri expects to see a repeat of what happened in the two states.

“People want a strong and stable government, not a constant change of administration as seen in recent years. This merry-go-round has hit the voters and economy hard.”

In Johor, BN is so confident of victory that it has again decided to abandon PAS, its partner in a separate alliance called Muafakat Nasional, as it did in Malacca.

Johor Umno deputy chief Datuk Nur Jazlan Mohamed said his party does not need to work with PAS in Johor.

In any case, PAS did badly in Malacca, failing to win any of the eight seats it contested, Jeniri said, adding that the results of the Johor polls could also determine the future direction of Parti Pribumi Bersatu Malaysia (Bersatu).

“Although Bersatu president Tan Sri Muhyiddin Yassin is from Johor, his party is not strong in the state. How well it does will have a bearing on whether it will renew ties with PH in the next general election.”

He said the Johor polls would be an acid test for all three contesting coalitions, given that the state usually reflects the national sentiment.