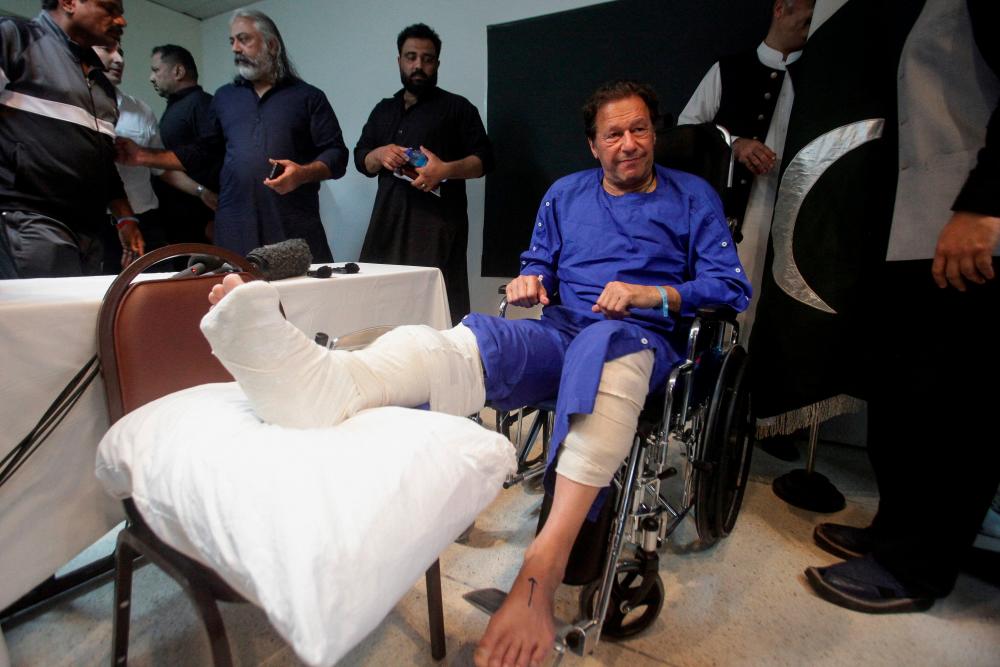 ISLAMABAD: Pakistani police on Tuesday launched a criminal investigation into a failed assassination attempt on former prime minister Imran Khan (pix), saying one shooter was involved against his assertion that there were two of them.

Khan, 70, a former international cricket star turned politician who has been pressing for early elections since being ousted as premier after losing a parliament vote in April, was shot at an anti-government rally last Thursday. He is recovering from leg wounds at his home in the eastern city of Lahore.

Khan supporters blocked roads near the capital Islamabad on Tuesday, disrupting traffic and forcing schools to close, as they protested against the attempt on Khan’s life in the city of Wazirabad in Punjab province.

A copy of the police report lodged by Wazirabad police and seen by Reuters said a man in the crowd near Khan had taken out a pistol and started shooting, wounding the former premier and 10 other people, one of whom later died.

Police said the suspected shooter was arrested after Khan supporter Ibtesam Hasan overpowered him and threw off his aim, possibly saving the ex-premier from more serious gunshot wounds.

Hasan has in several local media interviews said the suspect detained by police was the shooter he had tackled.

Khan, who has said two shooters had tried to kill him, and his aides have said they will not accept the case registered by police it until it includes suspects named by him.

“We will file a petition,“ Khan aide Fawad Chaudhry told Reuters, saying the party would want a court to decide on the names given by the former premier.

Khan has accused three people of devising a plan to assassinate him, naming Prime Minister Shehbaz Sharif, Interior Minister Rana Sanaullah and intelligence official Major-General Faisal Nasser. He has provided no evidence for his claim, which was strongly denied by the government and military.

Khan launched what is known as a long-march protest rally from Lahore to the capital on Oct. 28. He was waving to the crowd from a container mounted on a truck in Wazirabad when a man fired several shots at him.-Reuters