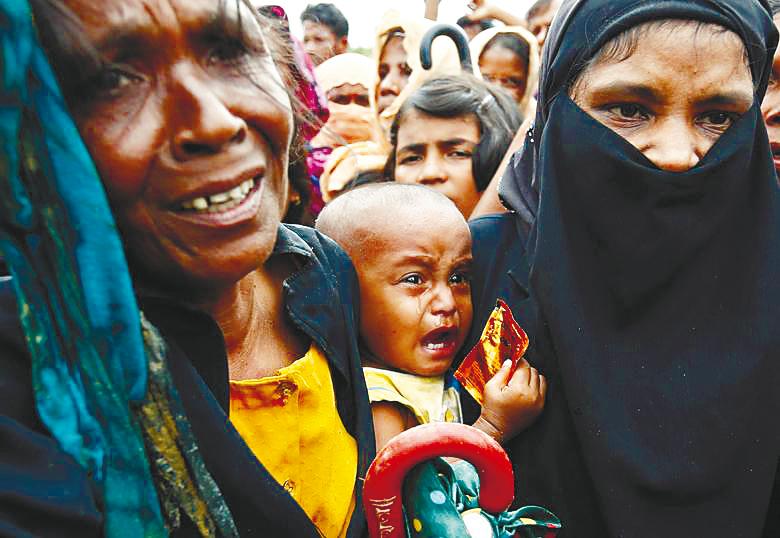 Rohingya women and girls have encountered numerous forms of gender oppression over the years. – REUTERSPIC

THE situation of the Rohingya ethnic minority is inextricably linked with the political history of Myanmar, with deep roots in the “divide and rule” master policy of the colonial period (“The Rohingya genocide is rooted in British colonialism”, Spheres of Influence, Oct 5, 2020).

By way of background, modern-day Myanmar has an established and long history of authoritarian rule since General Ne Win’s “Burmese road to socialism” revolution took off in 1962 in a coup d’etat that overthrew the democratic political alliance of the Anti-Fascist People’s Freedom League (AFPFL).

The AFPFL was once helmed by the late father of the popular Burmese leader Aung San Suu Kyi (otherwise known by her sobriquet, the “Iron Lady”) namely, Aung San, who is known as the “Father of the Nation” (assassinated in 1947, prior to the declaration of independence in 1948).

The process of transitioning back to democratisation under the National League for Democracy (NLD) as the leading and most prominent pro-democracy movement in Myanmar has been protracted and painful.

The military had deepened/entrenched its role and stranglehold in the levers of powers, with the 1988 coup d’etat, which ousted the Burmese Socialist Programme Party as the political vehicle of the hybrid national ideology under Ne Win.

The country’s lapse into military dictatorship, with the 2021 coup d’etat, meant the return of oppression and suppression of the people, including the Rohingya ethnic minority.

The Rohingyas were already reeling from the systematic persecution, which persisted under the brief period of normal, democratic rule of the NLD (with Aung San Suu Kyi as the state counsellor or de facto prime minister) due to inter-ethnic and inter-religious tensions in the western Rakhine province.

Under the current Myanmar military junta, the Tatmadaw (as Myanmar’s Armed Forces) regained its, hitherto, prominent influence in the country’s affairs, with profound repercussions on the Rohingya’s quest for a definitive resolution to their situation.

The Rohingyas have never been part of the independence movement and, by extension, representative signatories. As such, it is unsurprising that they have been consistently excluded and marginalised from Myanmar’s nation-building and development process as a holdover of the colonial legacy.

Although conflicts between the Rohingyas and the military broke out early, as soon as Burma became independent, these were sporadic, intermittent and on the fringes.

Things became worse and intensified when the introduction of the 1982 citizenship law completely barred the Rohingyas from full citizenship rights, rendering them stateless. In other words, the entire Rohingya community was now institutionally and structurally targeted, implicated and blacklisted by the state.

As such, although there has been a long history of human rights violations of the Rohingya community, the asymmetrical conflict with the Tatmadaw has been transformed into full-blown genocide and the concomitant of a refugee crisis.

Rohingya women and girls have encountered numerous forms of gender oppression over the years, resulting from violations of their basic rights and needs on a frequent basis.

As outlined by the United Nations’ (UN) Fourth World Conference on Women in Beijing (1995), GBV is defined as “any act that results in physical, sexual or psychological pain or suffering to women, including threats of such acts, coercion or arbitrary deprivation of
liberty, whether happening in either public or personal life”.

According to the UN High Commission for Refugees, during a refugee crisis and displacements caused by genocide and conflicts, the threat of GBV significantly increases for women and girls.

The UN special envoy has been able to record the patterns and trends of sexual violence within the Rohingya community. Rohingya women and girls have been intentionally targeted because of their ethnicity and religion (“Rohingya women gang-raped by Myanmar army: UN, The Daily Star, Nov 12, 2017). These women are often gang raped and sexually assaulted and harassed by the Tatmadaw as the prime suspect.

At times, the Tatmadaw would brutally rape these women or girls of Rohingya to the point that their sexual organs are irretrievably damaged, in addition to leaving behind physical bite marks on the cheeks, neck, breast and thighs. This form of systematic targeting of Rohingya women and girls by the Tatmadaw is a form of genocide, since it seeks to promote the eradication of the Rohingyas through direct assault on the reproductive capacity of the female sex.

Only 6%-7% of the victims have come forward to seek medical and psychological treatment and support (“Suffering in silence: Sexual and GBV against the Rohingya community and the importance of a global health response”, Journal of Global Health, Dec 2020, 10(2)).

Female victims are often hesitant to report or disclose GBV or seek support during or after a violent occurrence owing to social and cultural limitations and fear of stigmatisation. Thus,
most of them remained silent, resulting in
non-documentation on the GBV experienced by any of these affected women and girls.

Girls below the age of ten have been raped during the military violence, as documented by Medecins Sans Frontieres, which provided medical and psychological care (“Rohingya girls under 10 raped while fleeing Myanmar, charity says”, The Guardian, Oct 25, 2017).

However, GBV exists in the refugee camps also (“Rohingya children at risk of trafficking, sexual abuse and child labour”, The Daily Star, Jan 12, 2023).

The congested and desperate living conditions exposes women and girls to the risk of GBV. This is why the women and girls subject themselves to trafficking (including girls as young as five) but then become vulnerable to being killed and discarded (“Why Rohingya women and girls are risking dangerous smuggling routes”, The New Humanitarian, Jan 16, 2020).

An analysis by the International Rescue Organisation found that 94% of documented GBV reports were a result of intimate partner (e.g. in a marital relationship) violence at the Rohingya refugee “hub” of Cox’s Bazaar.

Based on a research data from 2018, approximately 240,000 Rohingya women were infected with HIV (“HIV transmission knowledge among Rohingya refugee women in Bangladesh: A cross-sectional survey”, BMJ Open, 2021).

In addition, abortion is mainly illegal in Myanmar and Bangladesh (except in the restricted situation of saving the mother’s life).

Therefore, women tend to practice unsafe abortions to prevent unwanted pregnancies. It is reported by the UN that unsafe abortions is the cause of 15% of all maternal deaths in the Rakhine State, in contrast to the national average of 10% (“Sexual and gender-based violence in Myanmar and the gendered impact of its ethnic conflicts”, Human Rights Council/OHCHR, 2019).

Myanmar ratified the UN Convention on the Elimination of all Forms of Discrimination against Women (Cedaw) in 1997. Breaches
of Cedaw by Myanmar should give rise to
UN-based sanctions – diplomatic, economic, political.

In the final analysis, it cannot be strongly emphasised and reiterated enough that the GBV situation taking place within the Rohingya community warrants greater and sustained action from the international community.

1. There is a need to increase the frequency with which GBV is reported and documented among Rohingya refugee women and girls

Currently, there are various Rohingya and international NGO that have been investigating/fact-finding, documenting and reporting on GBV. To increase the frequency (and streamline the data), the UN special rapporteurs in Myanmar and Bangladesh should intensify collaboration with Rohingya and international NGO as well as with the respective governments of the host countries, including Malaysia.

It is important to come up with a systematic methodology which comprehensively “tracks and traces” the “supply-chain” of GBV of Rohingya female refugees, from the military violence to the camps and the host countries.

The systematic data should be uploaded to a website as a single point of reference, i.e. virtual one-stop centre (OSC). Frequency of documentation and a virtual OSC will provide accessible data that is also updated for appropriate action to be undertaken, e.g. increasing sanctions, coordinating operations.

2. A safe corridor should be recognised for humanitarian assistance

It will also enable the evacuation of women, children and senior citizens to these zones. Humanitarian corridors under conditions of, e.g. a ceasefire, should eventually become “permanent” zones of safety, to alleviate
over-crowding in the Cox’s Bazar. These will also provide alternative shelters for female refugees, who in addition to the general genocide, wish to also flee GBV in all its forms.

The placement of drones in refugee camps contribute to the promotion of safeguarding the well-being of the females by monitoring as well as to record for any GBV at these locations. The drones will, therefore, play the role in place of the CCTVs. And, by extension, the existence of these drones will serve as a form of pre-emptive measure that would, to a certain extent, dissuade the enacting of GBV on the female Rohingya refugees.

MSF provide general healthcare and mental health support to the Rohingya and other communities through its clinic in Butterworth, mobile clinics in Penang and Kedah, and detention centres.

The government and Health Ministry should help to expand MSF’s operations in other parts of the country, especially the Klang Valley, where there is also a concentration of Rohingya female refugees, by providing financial and technical support.

In conclusion, GBV is one of the principal reasons for Rohingya refugees fleeing to neighbouring countries for protection and freedom.

It is vital for the international community to effectively address this aspect in resolving the Rohingya crisis.

Jason Loh and Jachintha Joyce are part of the research team at EMIR Research, an independent think tank focused on strategic policy recommendations based on rigorous research. Comments: letters@thesundaily.com 3.Benzema, Vinicius strike as Real fight back to sink Atletico