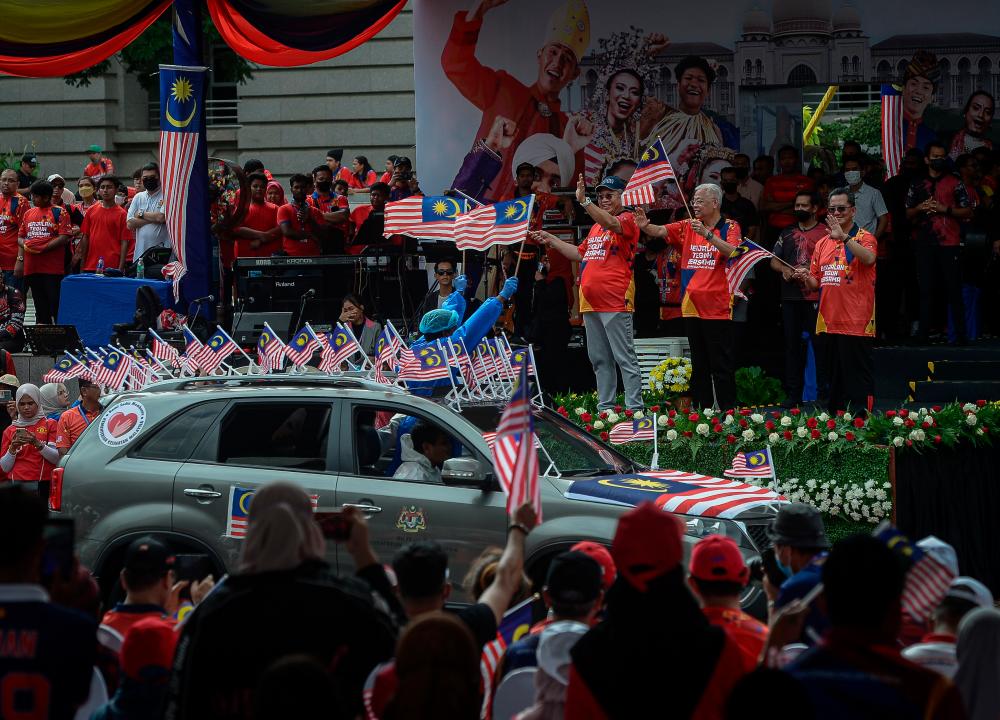 PUTRAJAYA: The Jalur Gemilang was raised at Dataran Putrajaya this morning, flying proudly to mark the start of this year’s National Month celebrations.

Prime Minister Datuk Seri Ismail Sabri Yaakob officiated at the historic event by planting the Jalur Gemilang in a console on stage, signifying the launch of the National Month and Fly the Jalur Gemilang 2022 themed ‘Keluarga Malaysia Teguh Bersama’.

Earlier, he received the Jalur Gemilang from a group of children dressed in traditional costumes, symbolising the spirit of patriotism encompassing various generations.

The prime minister arrived at Dataran Putrajaya at 9.33 am after joining some 15,000 members of Keluarga Malaysia in walking from Dataran Putra for 2.7km under the ‘Berjalan Teguh Bersama’ programme.

After a short break, the event continued with the reading of prayers and a speech by Communications and Multimedia Minister Tan Sri Annuar Musa, who is chairman of the National Day and Malaysia Day 2022 Celebrations Main Committee. The prime minister then delivered his speech.

The event also featured a presentation of five traditional dances reflecting the various races in the country, during which the Keluarga Malaysia song was played by Pentarama Jabatan Penerangan.

This was followed by the Jalur Gemilang flag-raising ceremony by Royal Malaysian Navy (RMN) personnel, accompanied by the singing of the Negaraku national anthem.

Ismail Sabri then flagged off the Kembara Merdeka Keluarga Malaysia 2022 convoy involving more than 530 participants and 434 vehicles from various agencies.

The theme song for this year’s National Day celebrations, ‘Keluarga Malaysia Teguh Bersama’, was then sung at the ceremony by popular singers Alif Satar and The Locos, the first time it was played in public.

The convoy will be making its way to various states before ending the tour on Aug 31 at Dataran Merdeka in Kuala Lumpur, the venue for the National Day 2022 celebrations.

This year’s National Day is being observed with a difference by getting the participation of people at the community and family levels to fully reflect the theme and concept of the ‘Keluarga Malaysia Teguh Bersama’ celebrations.