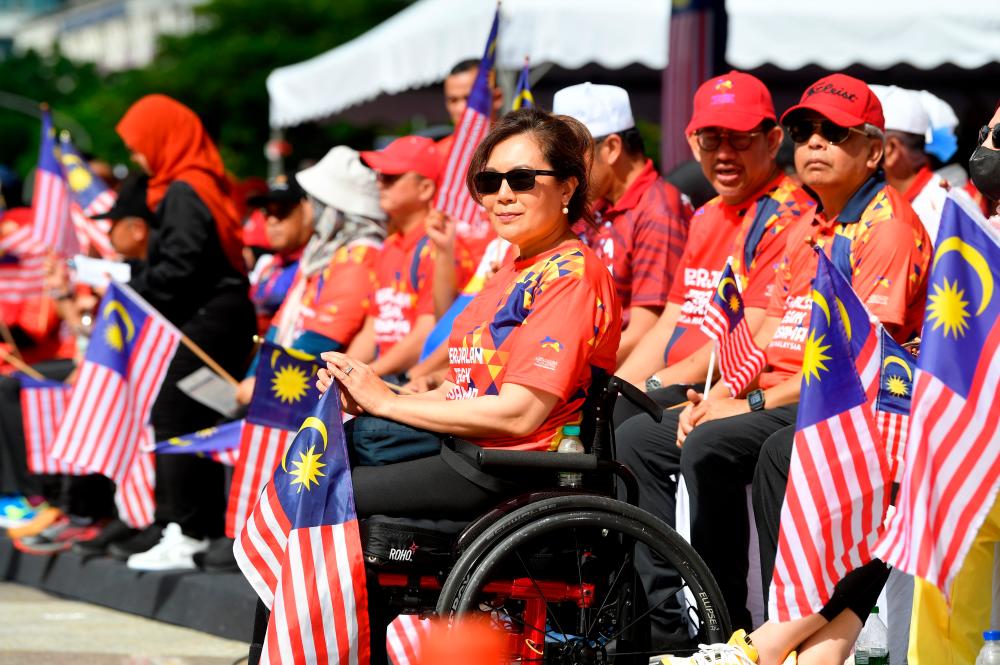 PUTRAJAYA: The excitement shows on the faces of the people with disabilities (PwDs) as they joined thousands of the Malaysian Family (Keluarga Malaysia) at the launch of the 2022 National Month and the Fly the Jalur Gemilang at Dataran Putrajaya today.

The brisk-walking programme, which started at Dataran Putra took participants to various locations, along the 2.7 km route, including the Alaf Baru Monument, before ending at Dataran Putrajaya. Several performances, including by the Orang Asli, were held at the various pit-stops.

Ras Adiba said she arrived at the venue at 7.30 am and joined in the walk on her wheelchair.

“It is an exciting day today. I am very happy because many of my friends from various categories also came.

“We actually came to watch the launch, but I am happy to be able to push (my) wheelchair from the Putra Mosque at Dataran Putra to here (Palace of Justice),“ she told Bernama when met at the launch of the 2022 National Month and Fly Jalur Gemilang here today.

She said her PwD friends were all very excited to be at the event, more so, being able to participate in the “walk”.

Firdaus Shukor, 30, who is physically disabled, said his participation in today’s programme was driven by his desire to “walk” with thousands of other Malaysian Family.

“Other people walk, so can I, but in my own way, using my wheelchair. No problem. I’m having fun,“ said the national athlete in fencing.

Another participant in the walk, D. Kamala Devi, who was accompanied by her husband and two sons, aged six and eight, said they left their house in Taman Puchong Perdana as early as 7 am to participate in the programme.

She said she got to know about the programme from a teacher at her son’s school and brought along her two sons so that they would get to know the Malaysian Family and see the country leaders in person.

“But today, I am here to join in the walk,” he said, adding that such a programme should be held periodically to celebrate the country’s diverse society.-Bernama