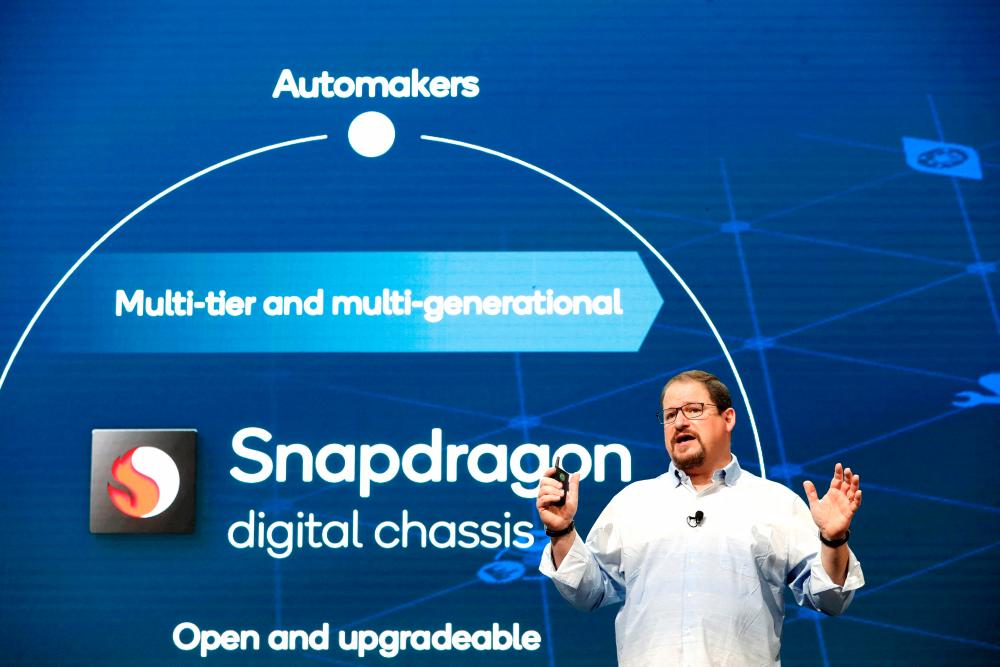 Amon speaking about Qualcomm’s Snapdragon Digital Chassis at a news conference during CES 2022 in Las Vegas on Jan 4, 2022. – Reuterspix

SAN DIEGO: US designer Qualcomm Inc on Thursday (Sept 22) said its automotive business “pipeline” increased to US$30 billion (RM137 billion), up more than US$10 billion since its third quarter results were announced in late July.

With electric vehicles and increasing autonomous features in cars, the number of chips used by automakers is surging and the automotive market has been a key growth area for chipmakers.

“When you think about a per car basis, a lower tier car, we have an opportunity of approximately US$200 stretching all the way to US$3,000 at the high tier,” said Akash Palkhiwala, Qualcomm’s CFO.

“Going forward the mix will continue to shift towards the high end so the opportunity will keep expanding.”

Qualcomm said the automotive market size it is targeting could grow to as large as US$100 billion by 2030.

Qualcomm also announced an expanded partnership with Mercedes Benz Group AG which will be using the Snapdragon Cockpit for its in-car infotainment system from 2023.

Qualcomm also has many automotive customers in China. Asked about the impact of broader US export regulations, CEO Cristiano Amon said “strong win-win partnerships between the US enterprises and the China enterprises will always be a force of stability”.

“But we’ll see what the future holds,” he added.