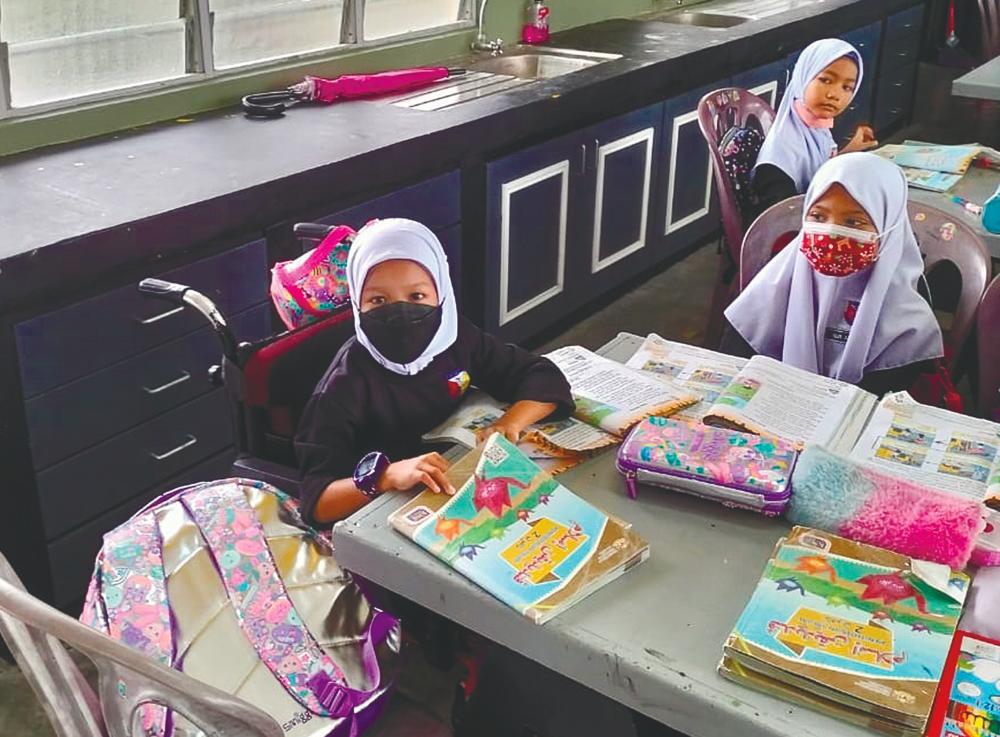 Adreena’s class was moved to the ground floor yesterday after her plight was highlighted by theSun. – SUNPIX

PETALING JAYA: A primary two pupil who suffers from cerebral palsy finally got to enjoy going to class without being carried by her mother every day.

After the pupil’s plight was highlighted by theSun yesterday, the Kuala Selangor district education office ordered the primary school in Puncak Alam to move eight-year-old Adreena Scha Azrul Shah’s class from the first floor to the ground floor the same day.

District education director Mohd Azuan Mohd Nawawi said the school’s headmistress had not raised the matter with his office.

“All the school needed to do was to inform us that it had to move the class because there was a pupil in need, but we were not informed until theSun contacted me this morning,” he said yesterday.

Mohd Azuan said the school has several classrooms on the ground floor that are being used for other purposes.

“Hence, I have instructed the school to convert the current art room into a classroom immediately to make Adreena feel more comfortable in school,” he said.

The girl’s mother, Norazleena Yaha, said she is thankful that her daughter can now enjoy going to school without feeling bad for herself.

“I have taught my daughter to be proud of herself and before this experience, she was a confident, bright girl despite her physical disability.

“Since she started primary one and had to be carried to class, my daughter has been crying and finding excuses not to go to school, especially when there are events such as Hari Raya celebrations, Teacher’s Day or Sports Day,” she said.

Norazleena hopes that with the shift, Adreena will be back to her cheerful self and able to learn alongside her peers without any problems.

“I hope no other student anywhere would have to go through what my family did, and I pray this will help make others more aware of persons with disabilities (PWD) and their needs,” she said.

She also thanked Mohd Azuan for his immediate action and the Bandar Puncak Alam community for being supportive of her family. The mother of four also thanked Jeram state assemblyman Shaid Rosli for his previous efforts to help Adreena.

Shaid said there were more than 200 schoolchildren with various disabilities in Bandar Puncak Alam alone, and many others have complained to him.

“Sometimes, they are just students with a broken leg or older teachers who do not have the energy to climb up the stairs. These are among the situations where school administrators have failed to help,” he said.

Shaid claimed some teachers resorted to retiring early because their school administrators did not help to move classrooms to lower levels or the ground floor.

Yesterday, theSun highlighted Norazleena has had to carry her daughter to her classroom because the school administrator had refused to move her class to the ground floor.

To make matters worse, Norazleena was unable to resolve the matter because the school’s headmistress has not been available since last year.

Adreena suffers from cerebral palsy, which limits her mobility and leaves her wheelchair-bound.

Legal experts had commented that the school administrators had failed to adhere to the law that ensures the rights of a PWD to attend school with facilities such as ramps, elevators and toilets for the disabled.