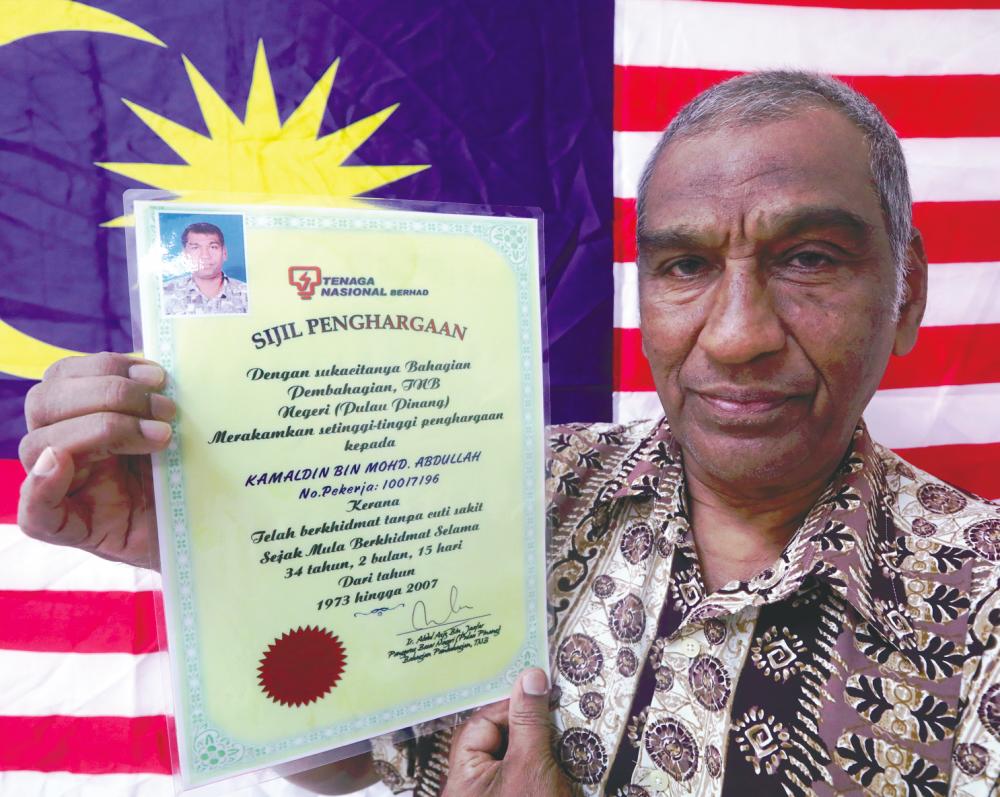 PETALING JAYA: Imagine working 34 years for a company and not taking medical leave (MC) for even a single day. This is what a former Tenaga Nasional Berhad (TNB) general assistant did.

And, 15 years after his retirement, this is something he is still fond of recollecting about his years with the company.

Now aged 71, Kamaldin Mohd Abdullah remembers the struggle and the meaning of sacrifice during his three decades of working life.

“I retired in August 2007, and each year, as we approach Merdeka, I recall my working life,” said the septuagenarian, who is also a former committee member of the Kampung Rawa Jamek mosque.

“From being a road works labourer to a van driver, I have never taken or applied for any sick leave during the 34 years I worked for TNB. I started with them when I was just 22 years old.

“I never believed in applying for leave just because I had a headache, toothache, motorcycle problems, fever or cough. Not even when I was involved in an accident during work, where the van I was driving overturned.”

Kamaldin said his “no medical leave” policy was due to his belief that employees should be honourable just as they expect such traits from their employers.

He said although there was no ceremony to celebrate his record of excellence as he was a non-executive employee, it did not matter to him.

“I know I did my best while working for TNB, and that is good enough for me.”

He said employers must strive hard to ensure that the working environment is conducive and safe.

“Health is always a priority. That is why we encourage a policy of work-life balance. On top of that, employers must also offer annual medical checks and good medical insurance to safeguard their employees’ health.”

Syed Hussain said in many organisations, there are employees who do not utilise their medical leave as they are healthy.

“Companies should have sports clubs to encourage healthy activities. Employers and employees must play a role in taking care of their health. Good eating habits, proper exercise and enough sleep are important to sustain a healthy lifestyle.”

According to The Employment Act 1955, upon commencement of employment, an employee is entitled to 14 days of paid sick leave.

The number of sick leave increases to 18 days when the person has worked for two years or more, and 22 days upon reaching five years or more of service.

If hospitalisation is necessary, then irrespective of the period of service, an employee is entitled to 60 days of paid leave.

A common reason for taking sick leave among Malaysians is “to rest”. This is especially so with the new “always available” work culture that has crept into companies, where employees are expected to be available even after office hours.

According to a study by Kisi, an American security solutions company, Kuala Lumpur has the third most overworked population in the world and employees have one of the worst work-life balances out of 40 international cities.