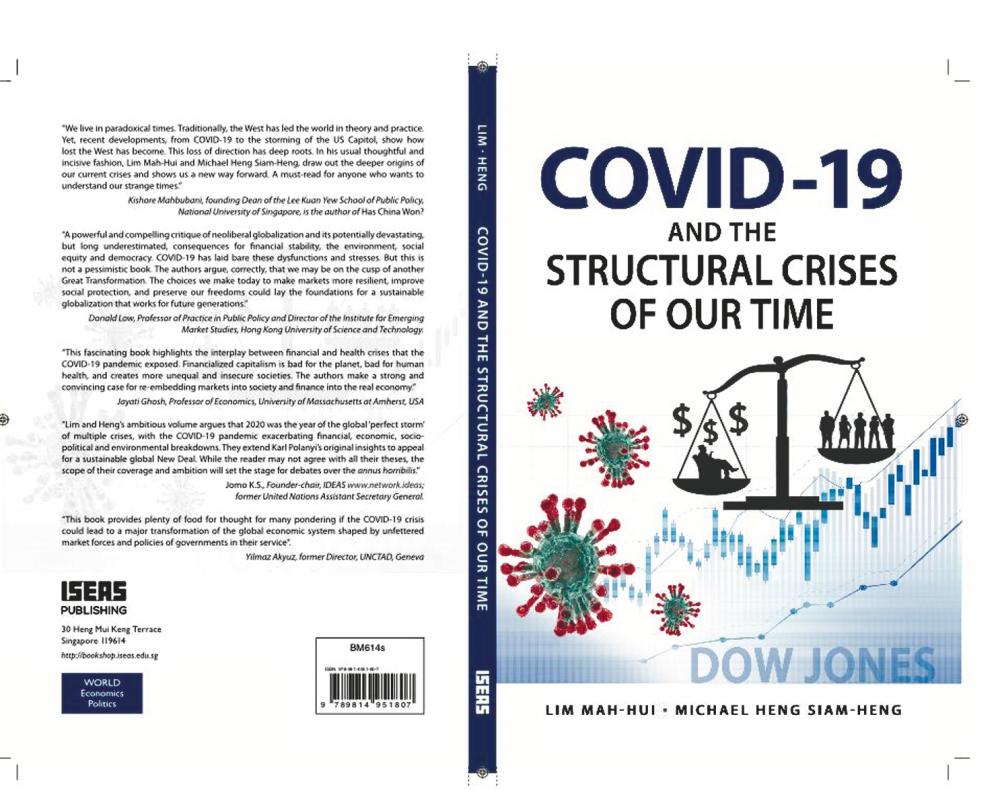 This is a very good book and timely too. No one knows how long Covid-19 will stay with us and so its connection with the many crises of our time may last long.

The authors Lim Mah Hui and Michael Heng have done a yeoman service in connecting the pandemic crisis with an economic crisis as well as the financial crisis and the crisis for democracy.

Each of these crises have their own roots and we are passing through turbulent times when they seem to occur concurrently.

We need to think beyond our intellectual silos and think holistically. Planet Earth is both physical and social.

Globalisation is a recent phenomenon in human history.

It dates from the late nineteenth century when the steamship, telegraph and telephone linked widely separated countries.

However, it led to the first world war of 1914-18. A second phase of globalisation saw the advent of aviation, the submarine, bio-chemicals, the machine-gun and nuclear energy.

Let us pray that this third phase of globalisation from the 1950s onward will not lead to a third world war. What we are witnessing is a world war with a virus!

The conjunction of such a world war with other global issues is unique in human history.

I would suggest a fourth outcome, that of a retreat from globalisation and from nationalism.

Over a hundred new nations were born in the aftermath of World War II.

The United Nations was formed in 1947 because of these many new nations.

Some of these new nations will disappear with climate change as the rise in the sea level will submerge them.

Others are so small that they are in reality protectorates, defended by larger powers.

Brunei, for example, has the same population as Toa Payoh, the oldest township in Singapore, with a population of about one third of million, and is guarded in effect by the British.

The largest was the British, then came the French, the German, the Spanish and so on.

European empires held the world together. We must not forget the Chinese Empire controlling North and South Korea, Taiwan, Outer Mongolia, etc.

What Lim Mah Hui and Michael have shown is that the world is now held together by finance, economics and market ideology.

In the same way as empires broke up because of World War II (the Japanese brought European empires in Southeast Asia to an end), so the empires of finance, economics and market ideology may be on their way out.

For example, the authors have well demonstrated that much of finance today is really debt.

However, much of Latin America literally cancelled their debts to the US during the 1970s and 1980s.

Nations do borrow but they can also renege on what they borrow. This does not mean that the lenders lose.

Interest payments may well have paid off the principal of many loans.

Exchange rates can also change, making cheap what may have been an expensive debt.

The pound devalued in 1967 by 12% when Britain was unable to maintain its exchange rate. The external debt of Britain fell by that percentage.

Today all exchange rates are variable following the abandonment to a fixed price of monetary gold by the Federal Reserve Bank in 1971.

That price had been fixed at the 1944 Bretton Woods conference following which the International Monetary Fund was set up.

The debt of the US dollar falls when the gold price goes up. No wonder the US keeps borrowing.

The Federal Reserve repays US debt in US dollars, not gold.

The world today is going through a financial crisis. However, I do not see that as a permanent one.

Countries can live on much less income than they used to have. The gross domestic product (GDP) of many countries has fallen, Singapore experienced a 8.7% GDP cut during 2020.

I doubt it will rebound by more than 7% in 2021. This brings Singapore back at best in 2022 to its 2019 level. Poverty has increased but the country still survive.

The market system has a way of correcting itself. What may not correct itself is the political system.

The authors point to the emergence of a “nationalist-populist” society as well as a “social-democratic” society in their concluding chapter.

Another possibility is that a nation becomes part of another nation, not through conquest but through cultural-economic absorption.

It will well be that Taiwan later becomes part of the People’s Republic of China: there is cultural affinity and many Taiwanese businessmen have economic links with the mainland.

It is only the US that supports Taiwan but it will not risk a war just to keep Taiwan alive.

I congratulate Lim Mah Hui and Michael Heng for keeping readers conscious of the multi-lateral dimension of globalisation today.

We need this consciousness because of climate change and increasing poverty.

We are all human creatures who want to live with dignity. Finance and ideological ties cannot hold the world together.

It is compassion and respect for other persons that matters.

Lee Soo Ann is an emeritus professor at the National University of Singapore. Comments: letters@thesundaily.com