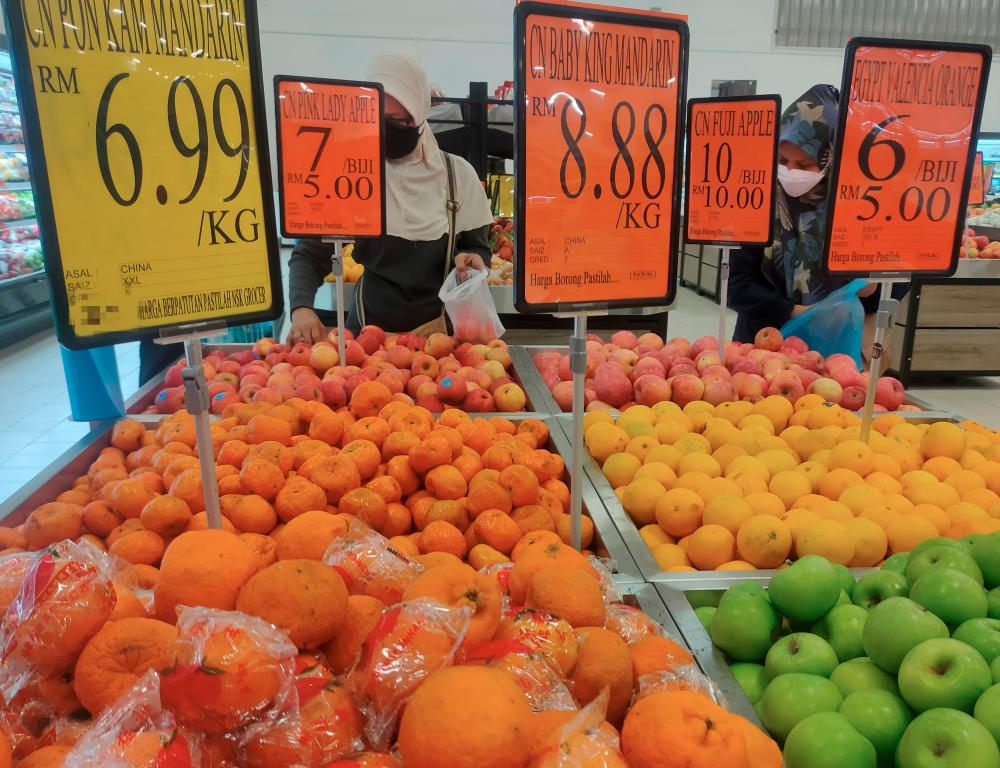 LIKE everything else in Malaysia, food prices, the scarcity of food as well as its poor quality are all inherently related to politics and governance.

Once again it is a reflection of what goes wrong in institutions that manage the food ecosystem.

Our country is gifted with rich productive land, energy resources and a conducive climate for food and livestock growth, yet we have been traumatised with rocketing food prices over the last few weeks.

Why are we being punished for the shortcomings of institutional deficiencies that are responsible for transforming these resources to food?

When a minister takes over any portfolio, he/she should surround themselves with experienced experts who thoroughly understand the pressing issues instead of appointing political loyalists to advise them.

These are persistent problems that have surfaced for years.

Politicians cannot be purporting to start afresh with a “we will form a new task-force” approach as if the issues were appearing for the first time.

This is also not about having a lack of funds or even a lack of ideas. It is about implementation.

The 12th Malaysia Plan (12MP) placed logically airtight solutions and recommendations with mathematically structured generous allocations to address existing issues and even prepare for the worst.

The Agriculture and Food Industry Ministry (Mafi) was allocated a whopping RM4.82 billion under the 12MP, with RM1.7 billion allocated for the farming and fisheries industry of which RM1.5 billion will go towards seed, fertiliser, price and production subsidies.

Additionally, the National Food Security Action Plan 2021 to 2025 was scheduled to implement 15 strategies and 96 initiatives to ensure there was food supply sustainability at all times, especially in the face of unexpected situations such as now.

And yet today we are facing food inflation at 4% with exorbitant meal prices that have more than doubled.

Mafi and other relevant agencies should not be quick to look for excuses such as the Covid-19 pandemic, Ukraine War, increasing fertilisers and grain prices, and labour issues.

Our neighbouring countries are faced with similar problems but yet they are producing and selling chilli, onions, pepper and other vegetables at much lower costs to us.

Malaysia continues to depend on food imports, which in 2020, amounted to a record-setting RM55.5 billion in order to meet the country’s consumer needs and demands.

This is not how Malaysia’s food industry was envisioned: The Green Book Programme (1974) launched by the late former prime minister Tun Abdul Razak was to encourage people to plant and grow their own food crops in order for us to be self-sufficient.

Today, we are suffering because of the various political blockades that prevented us from producing food effectively.

According to the Department of Statistics in 2019, there were 103,563ha of farmland abandoned, with 46,382ha not being utilised due to ownership issues.

This doesn’t include government owned idle or unused land.

Land acquisition for agriculture is also a long process as the jurisdiction comes under the various states.

There are political innuendos between federal and state governments on related matters.

Sadly in reality, while waiting for the government to pump in money to upgrade their businesses, small farmers across the country are being evicted by state land offices to make way for corporations.

They are also bullied by AP approved cartels who have been controlling, manipulating and exploiting prices to spiral.

Their livelihoods have also been threatened by other issues like worker shortages, inadequate chemical fertilizers, seeds and fuel supplies.

Many have also lost everything in the devastating floods recently.

The 12MP has emphasised smart farming and smart technologies as tools to replace traditional farming efficiencies but there are many complaints about fragmented information, higher deployment costs and poor network connectivity to support smart technologies.

Smart agriculture is actually about head hunting smart agriculturalists who have the experience and passion to cultivate the land.

Simultaneously, the farming industry should be made exciting enough to attract the younger tech savvy generation, with training and grants to modernise and reimagine the farm as a vibrant and innovative workplace.

Sustainable food systems are possible only when policy makers, agricultural scientists and those on the ground work together with utmost sincerity and dedication.

Today, all our eyes are pinned on the food industry because it affects all of us. The food crisis is being looked at as a matter of “injustice and incompetence”.

It is a wake-up call for the government to get “the price is right” before it escalates beyond control.