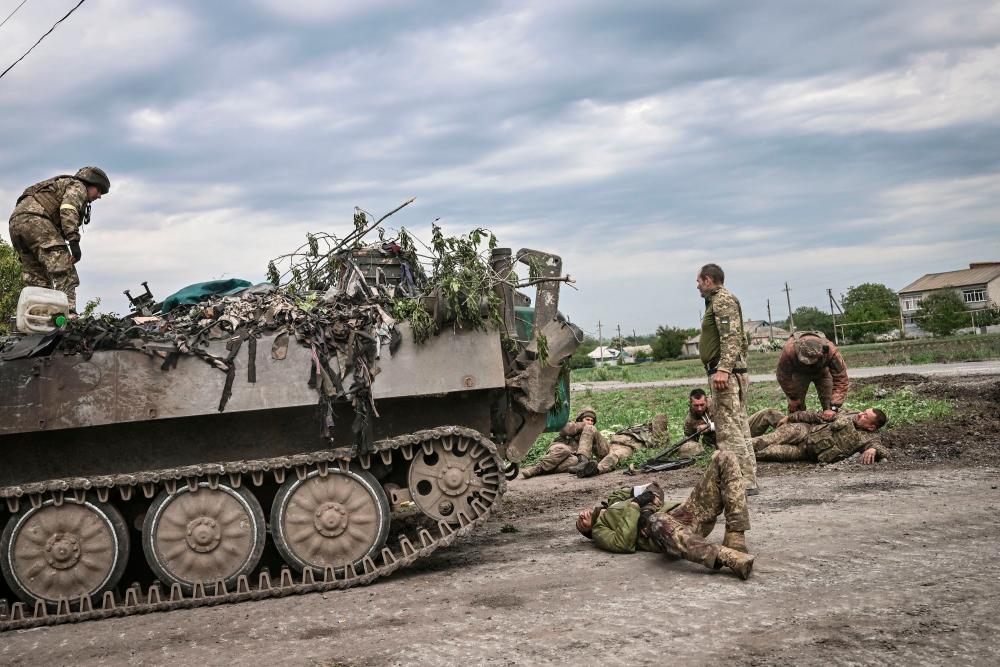 Shelling and missile strikes hit Kharkiv in the north, and Mykolaiv and Zaporizhzhia in the south, while eight civilians were killed on the eastern front in the Donbas, Ukrainian officials said.

Three months after launching their invasion, Moscow’s forces are focused on securing and expanding their gains in the Donbas region and on Ukraine’s southern coast.

Poland’s President Andrzej Duda was to address the Ukrainian parliament and meet President Volodymyr Zelensky later Sunday, a day ahead of the Ukrainian leader’s Davos videoconference.

“He will in particular pay homage to those who, in defending Ukraine, are fighting to defend Europe,“ Duda’s adviser Jakub Kumoch told the news agency PAP.

The World Economic Forum brings together the world’s business and political elite in the Swiss mountain resort of Davos, and this year’s gathering will put Ukraine’s crisis at centre stage.

Zelensky is due to hold a videoconference with delegates Monday evening to mark the opening of Ukraine House Davos, a forum for Kyiv and its international backers.

In March, Davos organisers cut ties with Russian firms and officials, and announced that anyone under international sanctions would not be welcome at the event.

Western nations have rallied behind Ukraine’s defence of its territories, led by the United States -- which just approved a $40-billion war chest for Kyiv -- and neighbours like Poland.

But some European countries that are dependent on Russian oil supplies, such as Hungary, are resisting calls for an embargo on crude -- and major EU economic powers like Germany remain huge gas importers.

The European Union is also reticent on Kyiv’s ambitions to join the bloc. France’s President Emmanuel Macron has suggested creating a “European political community” as a kind of antechamber to full membership.

“We don’t need such compromises,“ he said Saturday during a joint news conference with visiting Portuguese Prime Minister Antonio Costa.

“Because, believe me, it will not be compromise with Ukraine in Europe, it will be another compromise between Europe and Russia.”

France’s Europe Minister insisted Sunday that “Ukraine is Europe”, without addressing a potential EU bid, adding that the immediate goal is “to avoid any Russian victory”.

But, while rejecting any concessions to Russia -- and fighting to regain territory lost since Moscow began its offensive in late February -- Kyiv knows that talks will come.

“There are things that can only be reached at the negotiating table,“ Zelensky told Ukrainians Saturday.

The war, he said, “will be bloody, there will be fighting, but it will only definitively end through diplomacy”.

After just over 12 weeks of fierce fighting, Ukrainian forces have halted Russian attempts to seize Kyiv and the northern city of Kharkiv, but they are under intense pressure in the eastern Donbas region.

Moscow’s army has flattened and seized the Black Sea port of Mariupol and subjected Ukrainian troops and towns in the east to relentless ground and artillery attacks.

“There is no work, no food, no water,“ said Angela Kopytsa, a 52-year-old with bleached hair, breaking into tears as she spoke to AFP reporters on a Russian-organised tour of Mariupol.

Kopytsa said both her home and life had been destroyed during the fighting in the port and that “children at maternity wards were dying of hunger”.

The once-bustling Azov Sea port city has lived without electricity since early March and has now been reduced to a wasteland, the carcasses of charred buildings stand amid the lush greenery of tree-lined streets and parks.

The incessant fighting of the previous weeks has died down, and the Russian army and its separatist allies now patrol the streets.

Elena Ilyina, who used to teach at a university in Mariupol, sobbed as she told AFP about her life, saying her apartment has been destroyed and she now lives with her daughter.

“I have nothing left,“ the 55-year-old said. “I’d like to live in my apartment, in peace, go to work and talk to my children.”-AFP