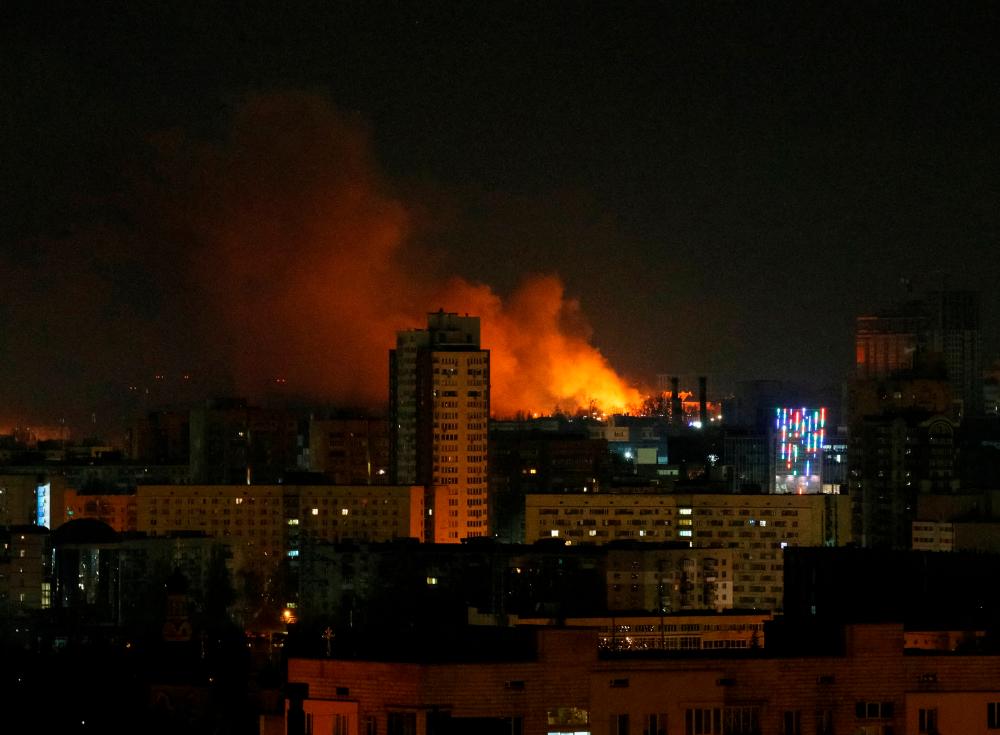 Smoke and flames rise over during the shelling near Kyiv, as Russia continues its invasion of Ukraine/REUTERSPix

The London-based right watchdog said in a statement that it documented “three incidents that it believes to have killed at least six civilians and injured at least 12 more.”

“The attacks occurred in Vuhledar, Kharkiv, and Uman,” it said.

Citing a local source who spoke to Amnesty International researchers, the group said two women and two men were killed, and six health care workers were among the injured.

“Analysing photos of the weapon scrap linked to the incident, Amnesty International’s weapons investigator determined that a 9M79 Tochka ballistic missile was used in the attack,” said the statement.

The rights watchdog also detailed another attack in the Kharkiv region, northeastern Ukraine.

“The likely target was the nearby Chuhuiv Air Base, but instead Russian weapon struck a residential block, causing extensive fire damage and apparently killing at least one male civilian and injuring at least two civilian women.”

In another attack on Feb 24 in Uman in the Cherkasy region, “a civilian man appears to have been killed by a strike that also damaged a nearby restaurant,” it added.

The group said Russia carried out “indiscriminate attacks on civilian areas and strikes on protected objects such as hospitals.”

“Some of these attacks may be war crimes. The Russian government, which falsely claims to use only precision-guided weapons, should take responsibility for these acts,” she said.

Calling on Russia to immediately end “indiscriminate attacks in violation of the laws of war,” she said: “The continuation of the use of ballistic missiles and other inaccurate explosive weapons causing civilian deaths and injuries is inexcusable.”

Russia’s military intervention in Ukraine entered its third day Saturday with the latest reports indicating that Russian troops were heading toward the capital, Kyiv, from several directions.

He claimed that Moscow had no plan to occupy the neighbouring country but wanted to “demilitarise” and “denasify” Ukraine.

Ukrainian President Volodymyr Zelenskyy accused Russia of trying to install a puppet government and said Ukrainians will defend their country against Russian aggression.-Bernama