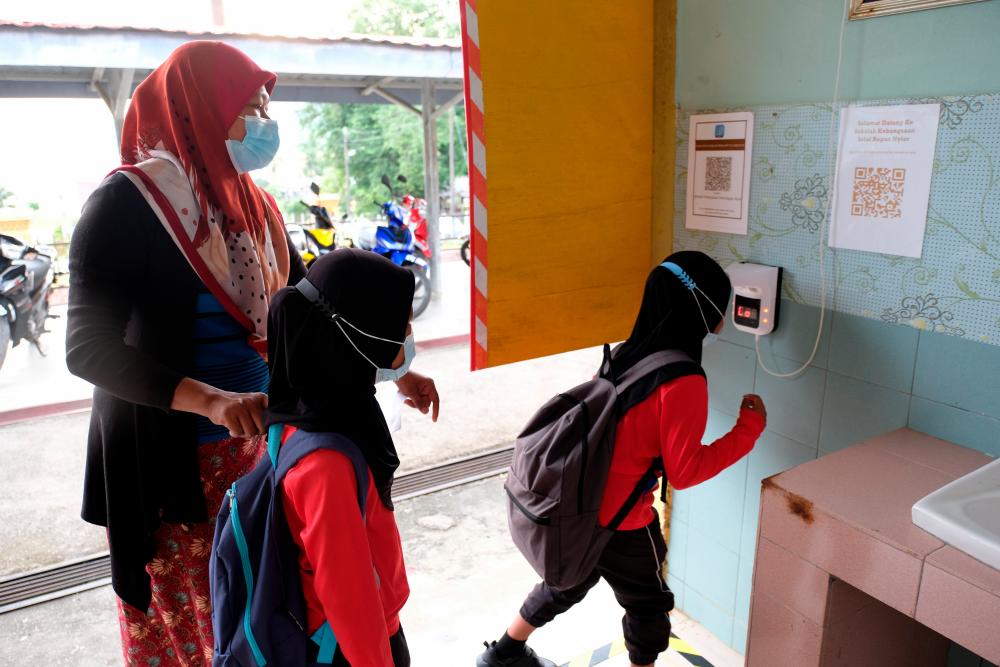 LANGKAWI: Ï feel relieved that my son is back in school. It would be better if schools had opened earlier for all pupils,” said Amirul Rashid, 37, on the physical opening of schools for Level One (Year One, Two and Three) pupils in Langkawi beginning today.

His son, Muhammad Ashraf Iman, 9, a Year Three pupil at Penghulu Ahmad Primary School in Ayer Hangat is among the first group of pupils nationwide who returned to school today, for face-to-face teaching and learning (PdP) session after schools were closed since May in a move to curb the spread of Covid-19.

He said although his son had followed classes through home-based teaching and learning (PdPR) before this, he felt that face-to-face learning was better.

“After this, my children will not be hooked on the phone all the time,” said the father of five when met by reporters at his home in Kampung Padang Ragut, Ayer Hangat.

Earlier the Education Ministry allowed the re-opening of schools for Level One pupils in states which are in Phase Four of the National Recovery Plan (PPN) and Langkawi which was involved in the tourism bubble since Sept 16 is now in Phase Four even though Kedah has just moved on to Phase Three.

While schools in Langkawi begin today, Negeri Sembilan and Labuan schools will start tomorrow and in other states the same measure will be implemented two weeks after the transition to Phase Four.

Meanwhile Muhammad Ashraf Iman said he had looked forward to going back to school as PdPR had been a challenge for him because he had to share his mother's device with three other siblings for the online classes.

“As a result, my attendance record was poor and I had to use the learning modules supplied by my teachers,” he said.

Meanwhile, his mother Ku Azlin Ku Saat, 31, said she had prepared all the school supplies needed for her children although not all of them would be attending school at the same time as the classes will open in stages.

“I had everything ready for them ... their school uniforms, school bags, stationery and all. They are really excited to go back to school and they have a lot to catch up,” she added.

Another parent, Mardi Abas, 43, from Kampung Pasir Hitam, Ayer Hangat said his son Iman Naim, 12 who is also a special needs pupil at SK Penghulu Ahmad had returned to school since Oct 3 as set by the ministry.

“Thank God, he had no problems going back to school. He will now have less time playing as he needs to focus on his school work,” said the father of six.

Meanwhile a Bernama survey at SK Selat Bagan Nyior, Pulau Dayang Bunting saw the children happy and excited and complying with the standard operating procedures (SOP) which had been in practice before this.

A Year Three pupil, Muhammad Akif Firas Khairul Anuar, 9, said he was already up at 6 am today as he was eager to be in school.

“I miss my friends and teachers. I am tired of online learning and not being in class,” he said when met at the school.

Year Two pupil, Nur Elysa Maisara Muhammad Shukor, 8, said it was definitely so much better to be in class again because through PdPR, all there was for her was just school work.

“The PdPR before this had in a way disrupted learning. We now need to work on rebuilding the teacher-pupil relationship.

“Parents and children are glad because nothing beats face-to-face interaction,” he added.-Bernama