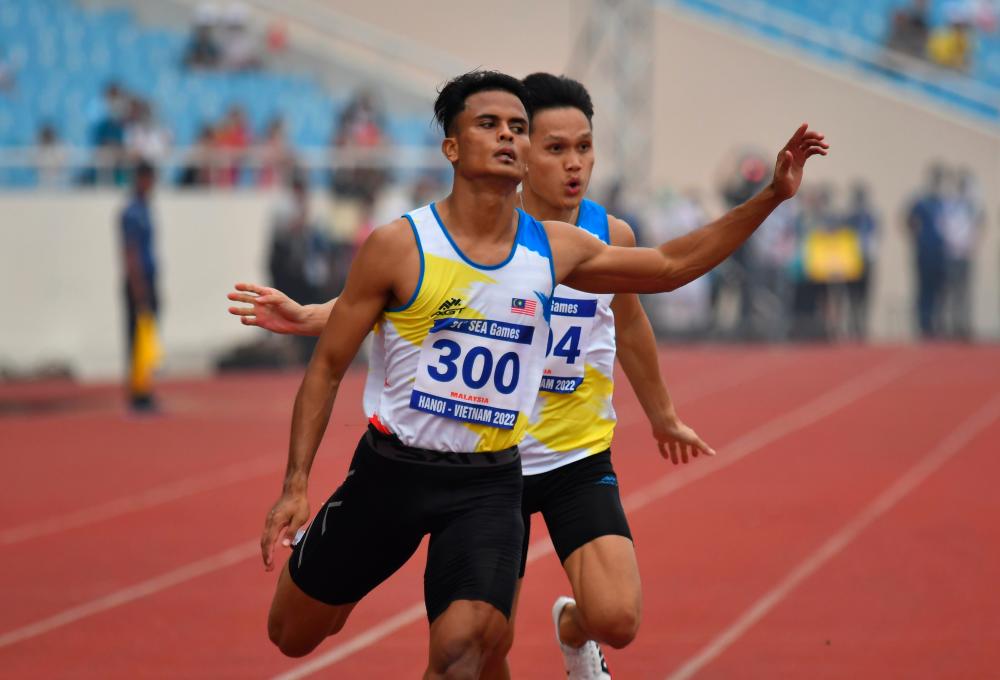 After breaking his compatriot Reanchai Seeharwong’s 23-year-old record of 20.69 seconds (s) set in the 1999 Brunei Games in Heat 1 clocking 20.41s earlier, the 16-year-old blazed the tracks at the My Dinh National Stadium by improving further to record 20.37s in the finals.

In the Malaysian camp, 20-year-old Muhammad Arsyad Md Saat also did relatively well by clocking two personal bests of 21.00s in the Heats 2 and 20.95s in the final to finish fourth, while Jonathan Nyepa (21.24s) finished sixth.

Muhammad Arsyad, who has a previous personal best of 21.25s clocked at the KL All-Comers in March, is now hoping to keep up the momentum in the 100m and 4x100m events, after facing some issues with the starting block today.

“The starting block kept moving backwards, on the eighth try, I tried to adjust it again, and the when the race began, it slipped again, so I was unable to chase the others. Winning a medal in the 100m probably will quite difficult, but for the 4x100m, chances are there as we are ranked second in the region,” he told reporters.

In the women’s 200m event, Singapore’s Veronica Shanti Pereira claimed back the gold medal after eight years, since emerging champion on home soil during the 2015 Singapore edition, with a new national record of 23.52s.

Meanwhile, Iskandar Alwi bagged the men’s pole vault bronze medal for a fourth consecutive time with a leap of 4.80m.

The Filipino athletes dominated the event, as Ernest John Obiena clinched the gold with a new Games record of 5.60m, erasing Porranot Purahong of Thailand’s 5.35m mark set in 2017, while Hokett Delos Santos claimed the silver with 5.00m.

Women's triple jumper R. Kirthana was on the losing end, finishing fifth with a 13.14m leap, while Thailand's Parinya Chuaimaroeng took the gold with a 13.66m mark.

In the men’s 1,500m, Mohamad Amirul Arif Mohd Azri missed the podium finish by a whisker, clocking 3 minutes and 56.82s.

Vietnam dominated the race, with Luong Duc Phuac (3:54.37 seconds) winning the gold, while his compatriot Tran Van Dang (3:55.66s) and Alfrence Braza (3:56.35s) of the Philippines completed the podium.

Meanwhile, team manager John Ayavu said K. Prabudass has withdrawn from the men's 1,500m due to illness since yesterday's training, but will be in a better condition to compete in the 5,000m and 10,000m in the upcoming days.-Bernama

2.Ibrahimovic out 'seven to eight months' after knee surgery

3.Pfizer offers to sell medicines at cost to poorest countries