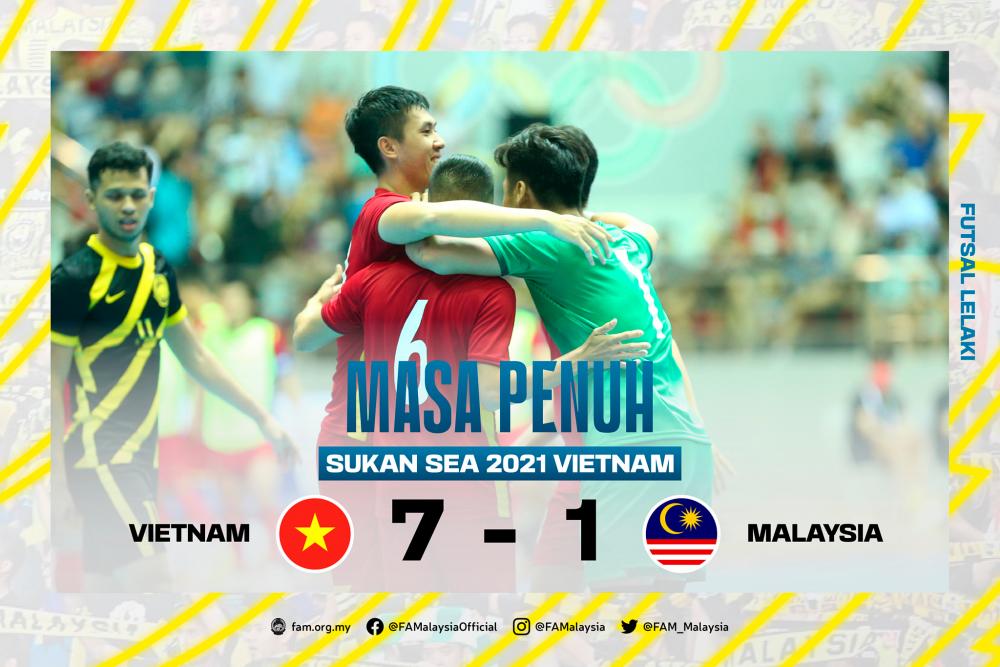 HANOI: The national men’s futsal squad received a 1-7 trashing at the hands of Vietnam in the second round-robin match at the 31st South East Asian (SEA) Games at Ha Nam Sports Complex today.

It is the second consecutive loss for the squad, coached by Chiew Chun Yong, after losing 2-6 to Thailand last Wednesday.

The national squad repeated its humiliating performance of letting in five goals in the first half, with Nguyen Minh Tri scoring in the second minute, Nguyen Thinh Phat (fifth and 12th minute), Le Quoc Nam (18th minute) and Nguyen Manh Dung in the 19th minute.

Malaysia actually got off to a good start with their solitary goal scored by Muhammad Ekmal Shahrin in the second minute. Hosts Vietnam were shocked into action and equalised in the same minute through Minh Tri.

Malaysia’s rout was complete in the second half when Vietnam capped their first win with two goals through Thinh Phat in the 37th minute and Minh Tri a minute after.

The loss sends Malaysia to the bottom while Vietnam and Indonesia are first and second respectively with four points, while Thailand, which have played only one match, is third with three points.

Malaysia will meet Indonesia (May 16) and Myanmar on May 20 at the same venue to keep their medal hopes alive.

The women’s matches will begin tomorrow, with Malaysia going against Thailand followed by a match against the hosts (May 17) and Myanmar on May 19 held at the same venue following a round-robin format.-Bernama