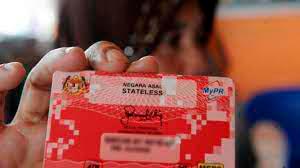 MALAYSIAN citizens are facing serious issues applying for citizenship for their children born in Malaysia under Article 15A of the Federal Constitution. There have been numerous pleas, plights and battles by this group highlighted in the media, and they are neither refugees nor asylum seekers, but are fighting for their identities.

It is pivotal for all stakeholders to not only be aware, but understand the laws that exist.

However, it is in the best interest of our stateless children that their plights be acted upon for security reason and for their future livelihood. They live a traumatic life and their future seems bleak as the process for citizenship can take more than five years, with some having to reapply several times after being rejected without any reason.

In the meantime, the waiting period sees a child being labelled “stateless”, and has to go through educational, healthcare and later employment obstacles, which the authorities have yet to address with workable solutions. These children also face mental anguish for being perceived as refugees. They have been denied basic equal rights due to their circumstances.

NGO and social workers have urged the authorities to shorten the waiting process for citizenship applications. Webinars and seminars have been organised to discuss all aspects and implications of statelessness but there seems to be a massive “roadblock” in the agencies, with little or no resolution given except to wait-and-see – a practice that is gravely hurting the affected and their families.

Malaysia signed the United Nations Convention on the Rights of a Child and is obliged to act in the best interest of these children.

Stateless children have risen and delivered in spite of their predicament. They have strived to be better students and good citizens, some excelling in academics, sports and music. Yet, the limitations put on them restrict them from having an official identity and equal opportunity as their peers.

We urge the government to implement policies where the interpretation of the laws are exclusive in nature. We ask for the laws to uphold the rights of all Malaysian citizens in conferring their children nationality on an equal basis, regardless of gender, marital status and the child’s place of birth. As for adopted children, to allow the conferral of nationality for adopted children without citizenship to acquire the nationality of one of their adoptive parents.

This is our collective pleas as parents and guardians who are Malaysian citizens.