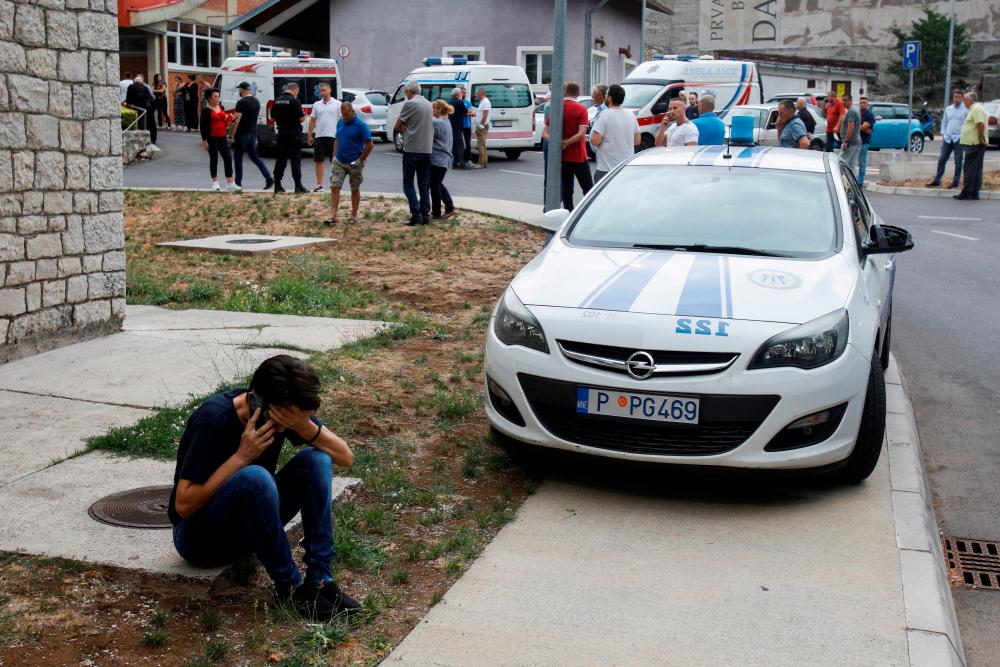 A relative of a victim talks on the phone in front of a city hospital after a mass shooting, in Cetinje, Montenegro/REUTERSPix

MONTENEGRO: Residents in Montenegro's Cetinje were filled with disbelief Saturday as they tried to make sense of an unexpected mass shooting that saw their quiet town's streets shattered by a gruesome killing spree.

Friday's shooting saw a man murder 10 residents in broad daylight before a passerby killed him, according to the state prosecutor.

The shooting erupted after an alleged argument involving the gunman turned violent.

The gunman then went on a door-to-door rampage during which he massacred a mother and two small children in a home he owned, according to residents.

Six people were also wounded, including three that were in a critical condition as of late Friday.

“In all, he broke into six houses,“ one resident in Cetinje told AFP, speaking on the condition of anonymity.

Authorities have yet to release a motive for the crime by the 34-year-old assailant that his neighbours described as a “peaceful” family man who worked at a nearby national park and had been the member of a local hunting club.

“He was a peaceful and discreet man,“ said the 55-year-old neighbour of the gunman, who asked to remain anonymous. “He was a father of four children. Nobody expected this of him.”

“I didn’t know him very well, but he was never a problem... I am shocked that he could have done this,“ added the neighbour.

“I invite all the citizens of Montenegro to be with the families of the innocent victims,“ he wrote in a post on Telegram late Friday.

Mladen Zadrima, the chief editor of Cetinje's local radio station, said residents were struggling to come to terms with the scale of the tragedy in the close-knit community of just 14,000 people.

“The day after has not brought any relief. On the contrary, disbelief has been replaced by sadness,“ said Zadrima.

Cetinje is famed as the home of the former royal capital and produced a string of renowned painters but for decades had fallen into economic malaise following the closure of an appliances factory that had once been the lifeblood of the community.

The picturesque town surrounded by mountains briefly gained notoriety for also being the home to members of the infamous jewel heist gang known as the Pink Panthers, whose members are mainly from hailed the former Yugoslav republics.

The incident comes as Montenegro is in the full throes of its highly anticipated tourism high season following two years of the coronavirus pandemic.

With an unemployment rate of some 18 percent and an average monthly salary of under 520 euros ($533), Montenegro counts on tourism and the appeal of some 300 km (180 miles) of azure coastline along with its stunning mountains to boost its revenues.

Organised crime and corruption have remained two major issues plaguing the country which authorities have pledged to tackle under pressure from the European Union.

Mass shootings, however, have been rare in the Adriatic nation.-Reuters