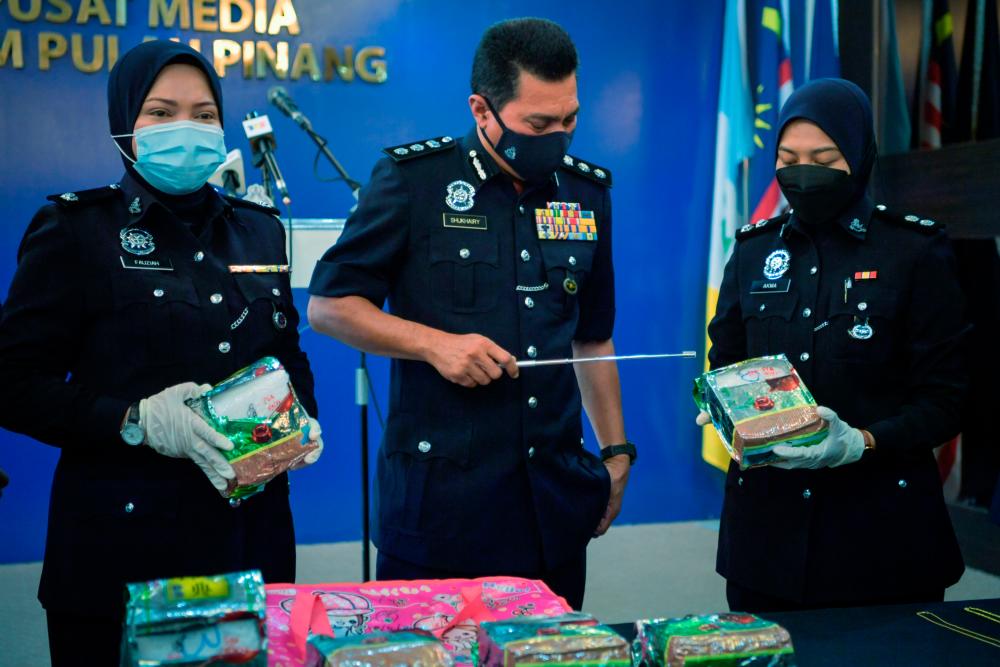 GEORGE TOWN: Penang police busted a drug trafficking syndicate after detaining six family members, including the parents, and seized syabu weighing 8,287 grams (g) worth RM298,332, in a series of raids around the state on May 18.

State Narcotics Criminal Investigation Department (NCID) chief, ACP Mohd Shukairy Abd Sabhe, said that police, acting on the information and intelligence conducted over the past week, launched an operation and arrested a 38-year-old local man by the roadside in Sungai Bakap in Nibong Tebal at 6 pm.

“Police seized six packages of ‘Chinese tea’ containing 6,112 g of syabu worth RM223,596 from the man, who was working as a factory van driver and believed to be the head of the drug trafficking syndicate.

“Following the arrest of the man, the police raided his family’s house in Bukit Tengah, Bukit Mertajam near here and detained the man’s parents, aged 62 and 64, as well as other family members who are husband and wife, aged 36 and 38,” he said at a press conference here today.

He said that in the raid, the police seized two packages of ‘Chinese tea’ also containing syabu weighing 2,076 g worth RM74,736, before another raid was carried out at a house in Taman Bagan, Butterworth. A 38-year-old woman was also detained.

Mohd Shukairy said that no drugs were seized there and the investigation found that the woman was also a family member of those detained earlier, and a member of the syndicate.

Further investigation also found that the syndicate obtained the supply of drugs from their network overseas by packaging them in Chinese tea packages to avoid detection by the authorities before distributing them to the local market.

“Two of the suspects were working as factory van drivers, while the others were not working, and the family was believed to be involved in drug trafficking activities since last year,” he said.

The police seized four vehicles including a Toyota Wish and a BMW as well as jewellery, all worth RM119,204.26.

“All suspects have been remanded for seven days until May 25. The case is being investigated under Section 39B of the Dangerous Drugs Act 1952,” he said, adding that all the seized drugs could be used by 41,435 addicts.-Bernama Germany, Canada in talks on terminal for exporting LNG to Europe Germany, Canada in talks on terminal for exporting LNG to Europe

3.Germany, Canada in talks on terminal for exporting LNG to Europe