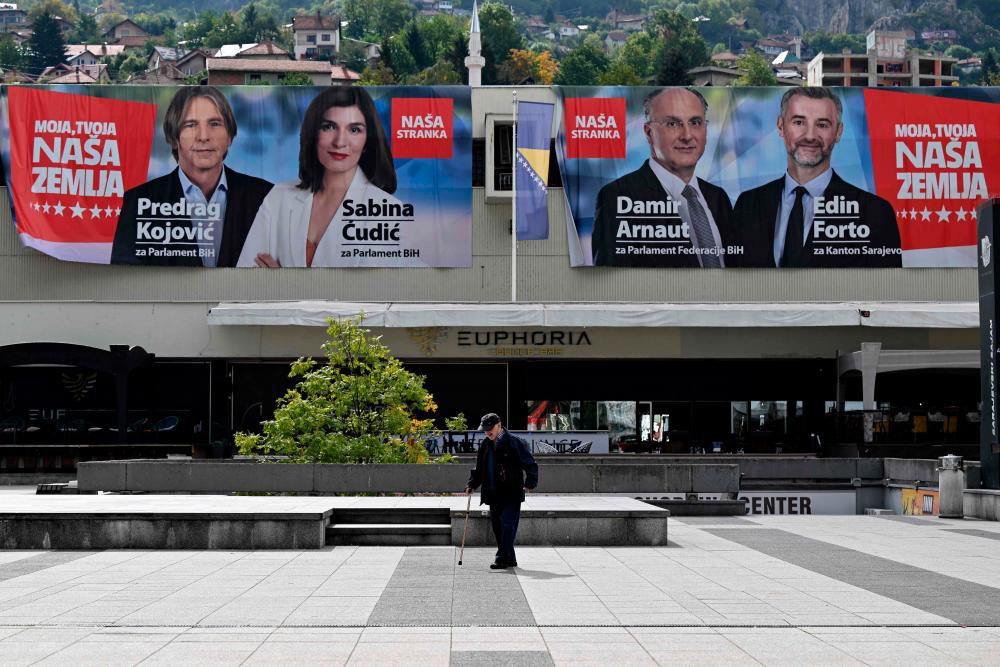 SARAJEVO: Bosnia’s general elections are often as complex as the country itself.

The Balkan state’s perplexing political system is the living legacy of the Dayton Agreement, which put an end to the civil war that claimed 100,000 lives and displaced millions in the 1990s.

But critics say the deal -- which divided the country into two semi-autonomous zones linked by a weak central government -- entrenched divides and left Bosnia a dysfunctional state.

Here’s a quick breakdown of how the polls will play out on Sunday.

For the central government, voters will choose two chambers of parliament plus the tripartite presidency, which is shared by a Croat, Bosniak Muslim and Serb who rotate chairs every eight months.

Then there are positions in the governments in Bosnia’s two “entities” that were created after the war.

In Republika Srpska (RS), the Serb-run entity, voters will choose MPs plus a president and two vice presidents.

Over in the Muslim-Croat federation, there will be elections for a bicameral parliament that will name a president and two vice presidents.

Voters will also cast ballots for assemblies that run each of the Muslim-Croat federation’s ten cantons.

To add another layer of complexity, authorities say there are 3.4 million registered voters in a country of just 3.5 million people -- leading many to question the accuracy of official figures.

That continues to be the million-dollar question.

The central government is in charge of the military, justice system, fiscal policy, foreign trade and diplomacy.

But the separate entities have their own police, education, health and economic systems.

A sprawling bureaucracy adds to the dysfunction.

The public sector employs more than 212,000 people whose wages make up nearly a third of Bosnia’s revenues, according to the central bank.

The Dayton framework sought to share power among three official constituent groups that clashed during the war: Bosnian Serbs, Croats and Muslims.

Bosniak Muslims make up 50.1 percent of the population, while Orthodox Serbs and Catholic Croats comprise 30.8 and 15.4 percent respectively.

The remaining four percent -- known as the “others” -- hail from groups that have no place in the Dayton system: remnants of a once-vibrant Jewish community, Roma people and individuals who do not affiliate with any group.

They can vote but cannot hold certain top political positions.

- Can the system be improved? -

The Dayton system halted the bloodshed but has left Bosnia in a straitjacket.

The European Union, which Bosnia aspires to join, has demanded that the country’s various governments find a way to coordinate and “speak with one voice”.

But that remains a distant goal as Serb leader Milorad Dodik regularly refuses to go to the capital Sarajevo.

The ongoing power struggle continues to be aggravated by divergent visions for Bosnia among its principal ethnic groups.

Bosniak Muslims tend to favour stronger centralisation, while Serbs in the RS do not want to cede any autonomy.

Croats are increasingly frustrated with their place in the federation, with some quarters pushing for the creation of a third entity.

- Why do Croats want their own entity? -

Concentrated in the southwest Herzegovina region, Croats make up a 22.5-percent minority of the federation, which is overwhelmingly populated by Bosniak Muslims.

Some Croats feel this set-up has marginalised their voice and would like to carve out their own entity.

While Bosnian Muslims are staunchly against reorganising the federation, Serbs generally do not oppose the idea as long as it does not affect Republika Srpska.

- What does the international envoy do? -

Since 1995, the United Nations Security Council has appointed a High Representative, currently Germany’s Christian Schmidt, to oversee the implementation of the peace deal.

The envoy is technically permitted to pass and revoke laws.

The position was initially going to be phased out in 2007 but the mandate was extended because of political instability and the failure of local politicians to pass reforms.-AFP