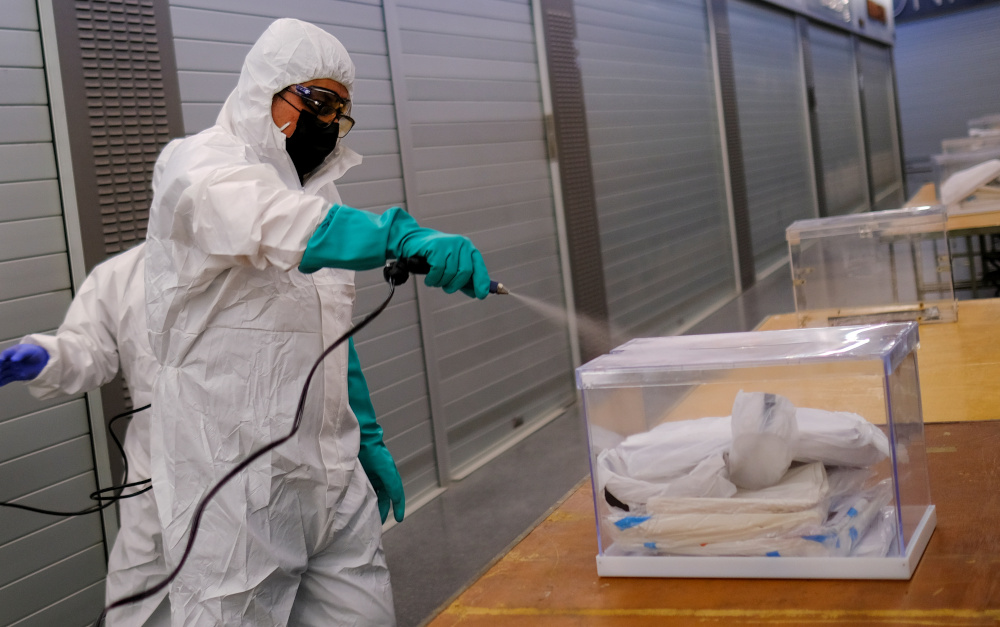 BARCELONA: Catalonia voted Sunday in an election overshadowed by the pandemic and which Madrid hopes will unseat the region’s ruling separatists more than three years after a failed bid to break away from Spain.

The vote in the wealthy northeastern region could see a high level of abstentions as Spain battles a third wave of coronavirus infections.

Regional authorities ramped up restrictions to slow soaring case numbers after the Christmas holidays and while the situation has slightly improved, the figures are still high.

Polls suggest turnout could be around just 60%, compared to roughly 80% during the last regional election in Dec 2017. Some 5.5 million people are eligible to vote.

But over 40% of the 82,000 people assigned to help staff polling stations on the day have asked to be recused, despite pledges they will receive full protective suits.

The regional government has insisted that all necessary health and security measures are in place, providing antigen tests for election workers, as well as spacious, well-ventilated polling stations.

Polling stations opened at 9 am (4 pm Malaysian Time) under cloudy skies and will close at 8 pm, with results expected at around midnight.

The drop in turnout adds to the uncertainty of the outcome.

Polls put the Socialists who govern at the national level neck-and-neck with the two pro-independence parties which have governed Catalonia since the last polls in 2017.

But the vote has been overshadowed by a bitter split between the separatist factions following the failed 2017 independence bid that sparked Spain’s worst political crisis in decades.

The Catalan government has been dominated by separatists since 2015, but Spain’s Socialist Prime Minister Pedro Sanchez is hoping this election, the fifth in a decade, could end their rule.

He himself came to lead Spain’s government in 2018 thanks in part to support from Catalan separatists. Even today, his minority government relies on them to pass legislation.

But Sanchez has not hidden his desire to remove them from power.

To that end, former health minister Salvador Illa is spearheading the Socialists’ bid to unseat the separatists in Sunday’s election. Sanchez has even taken part in some electoral meetings himself.

However, even if Illa’s Socialist Party of Catalonia (PSC) comes out on top, polls suggest none of the parties will win an outright majority of 68 in the 135-seat regional parliament.

And that means the eventual outcome will depend on deal-making.

Forming a government “will probably be quite challenging” and prospects of a repeat election cannot be ruled out, says Antonio Barroso, an analyst at political consultancy Teneo.

And while the separatist parties remain deeply divided, polls suggest the hardline JxC — “Together for Catalonia” — and the more moderate ERC could once again cobble together a ruling majority.

Both this week formally ruled out a coalition with the socialists.

The main question then is which of the two will come out stronger.

In the previous election in Dec 2017, JxC was ahead, forming a 70-seat coalition with ERC.

Should the tables be turned in ERC’s favour, it would likely ease tensions and help the tentative reconciliation Sanchez’s government has sought to broker since coming to power.

“An ERC executive would maintain the current ambiguous approach of criticising Madrid rhetorically but not adopting any unilateral measures,“ said Barroso.

“In contrast, a government headed by JxC would probably lead to a more confrontational stance.” — AFP