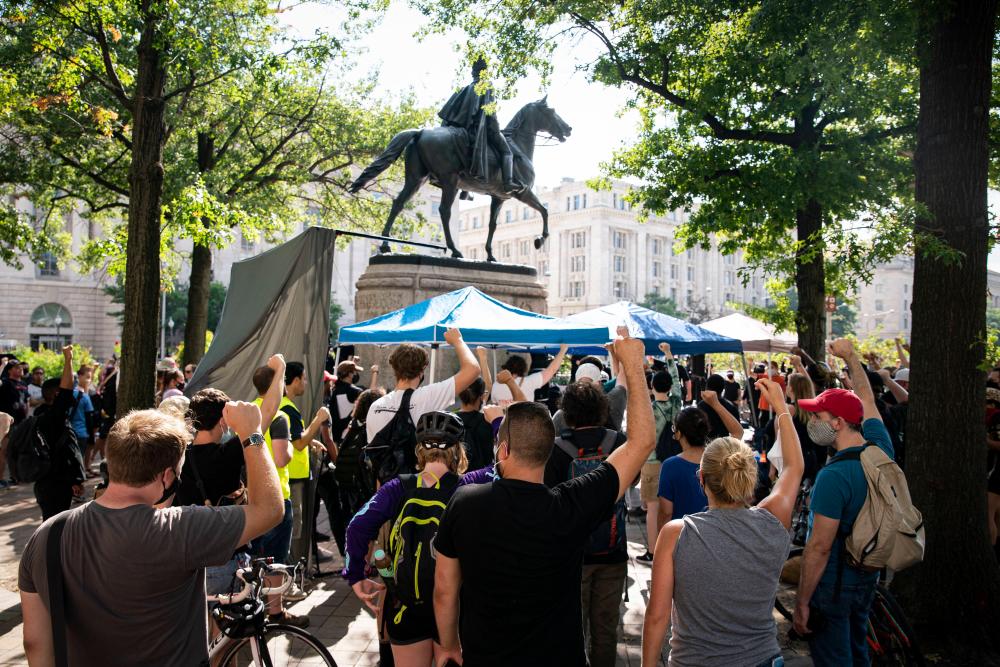 The protestors gathered in Washington, DC on Saturday to support over 600 people arrested and charged in connection with the January 6 attempted insurrection at the U.S. Capitol/AFPPix

WASHINGTON: A few hundred protesters turned up Saturday in Washington to rally in support of the pro-Trump rioters who ransacked the US Capitol on January 6, but they were outnumbered by a robust security presence and journalists.

Police who were caught on the back foot by the deadly riot on Capitol Hill took no chances this time: they used a security fence around the Capitol complex, police in riot gear and rows of armored trucks to keep the peace.

Organizers of the “Justice for J6” rally -- who said they wanted to draw attention to those held over the riot who did not commit violent offenses -- had received a permit for 700 people to gather near the Capitol’s reflecting pool, but far fewer showed up.

Chants of “Let them go!” rose from the demonstrators as speakers took to the podium to decry what they called President Joe Biden’s administration detention of “political prisoners.”

“Their rights are being violated,“ David Thacker, a 63-year-old attendee from Virginia, told AFP. “Their crimes do not justify the way they are being treated.”

Members of Congress were not in the building on Saturday as the rally unfolded under the watchful eye of police in riot gear with shields, with many lawmakers still on summer recess and not back in town until next week.

Look Ahead America, which organized the event and is planning similar rallies across the country in the coming weeks, had appealed for attendees to show respect to law enforcement officers and refrain from bringing Donald Trump banners.

But some carried signs that read “Free Biden’s political prisoners” or “Justice for Ashli Babbitt,“ a woman who was shot dead by police on January 6 as she tried to breach the House of Representatives.

Capitol Police said 400 to 450 people were inside the protest area, excluding law enforcement -- but that would include the numerous journalists on site.

Daniel, a 35-year-old who only gave his first name, said he had a few friends who were being detained pending trial.

“I think they should release them,“ he said.

Pointing at the Capitol, he added: “That’s our Capitol, for taxpayers, so we’re allowed to go in there when we want.”

Thousands of Trump's supporters, some associated with ultra-nationalist and white supremacist groups, stormed the US legislature eight months ago in an effort to overturn President Joe Biden's election victory.

Around 600 have been charged, including at least 185 accused of assaulting, resisting, or impeding officers or employees and more than 70 indicted for destruction or theft of government property.

Officials say the mob assaulted 140 officers, with damage to the Capitol complex estimated at $1.5 million.

Four people were arrested Saturday near the Capitol, including two for weapons charges. Capitol Police also said they separated groups of protesters and counter-protesters without incident.-AFP

1.Measures to prevent Covid-19 spike during Malacca election among focus in parliament today

3.US envoy says Iran nuclear deal effort is at a ‘critical phase’