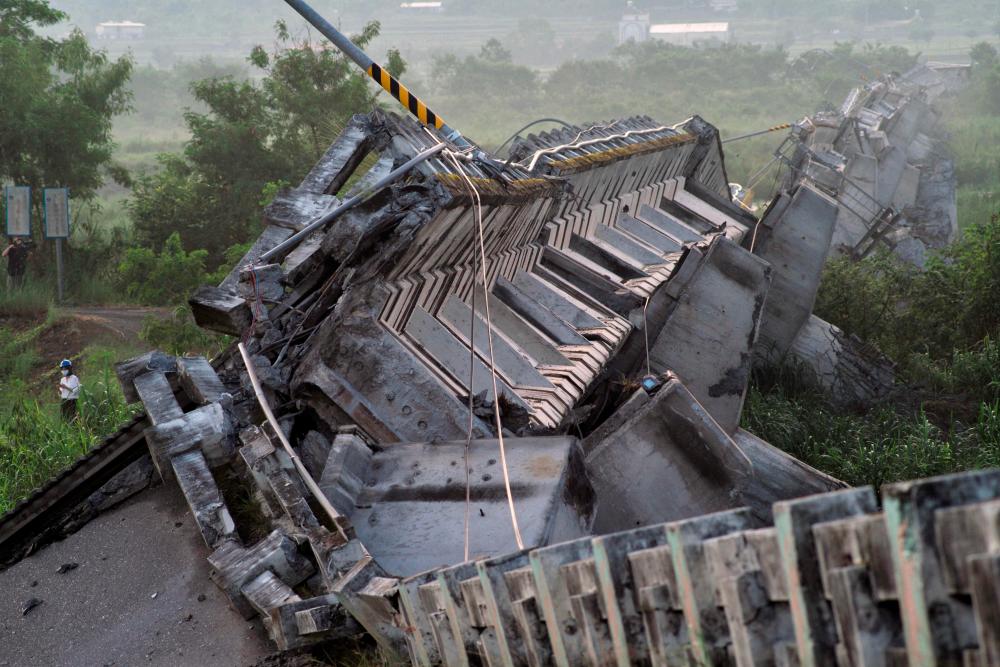 A journalist (L) walks past the collapsed Kaoliao bridge in eastern Taiwan’s Hualien county on September 19, 2022, following a 6.9 magnitude earthquake/AFPPix

The weather bureau said the epicentre was in Taitung county, and followed a 6.4 magnitude temblor on Saturday evening in the same area, which caused no casualties.

The U.S. Geological Survey measured Sunday’s quake at a magnitude 7.2 and at a depth of 10 km (six miles).

Taiwan’s fire department said one person had died and 146 were injured by the quake.

All four people were rescued from a building that collapsed in Yuli, while three people whose vehicles fell off a damaged bridge were rescued and taken to hospital.

The Taiwan Railways Administration said six carriages came off the rails at Dongli station in eastern Taiwan after part of the platform canopy collapsed, but the fire department said there were no injuries.

More than 600 people are trapped on the scenic Chike and Liushishi mountain areas by blocked roads, though there were no injuries and rescuers were working to reopen the roads, the department said.

The U.S. Pacific Tsunami Warning Center issued a warning for Taiwan after the tremor but later lifted the alert. Japan’s weather agency lifted a tsunami warning for part of Okinawa prefecture.

The quake could be felt across Taiwan, the weather bureau said. Buildings shook briefly in the capital Taipei, and aftershocks have continued to jolt the island.

Science parks in the southern cities of Tainan and Kaohsiung, home to major semiconductor factories, said there was no impact on operations.

Taiwan lies near the junction of two tectonic plates and is prone to earthquakes.