SUKIPT 2022 to be held in August at UPSI 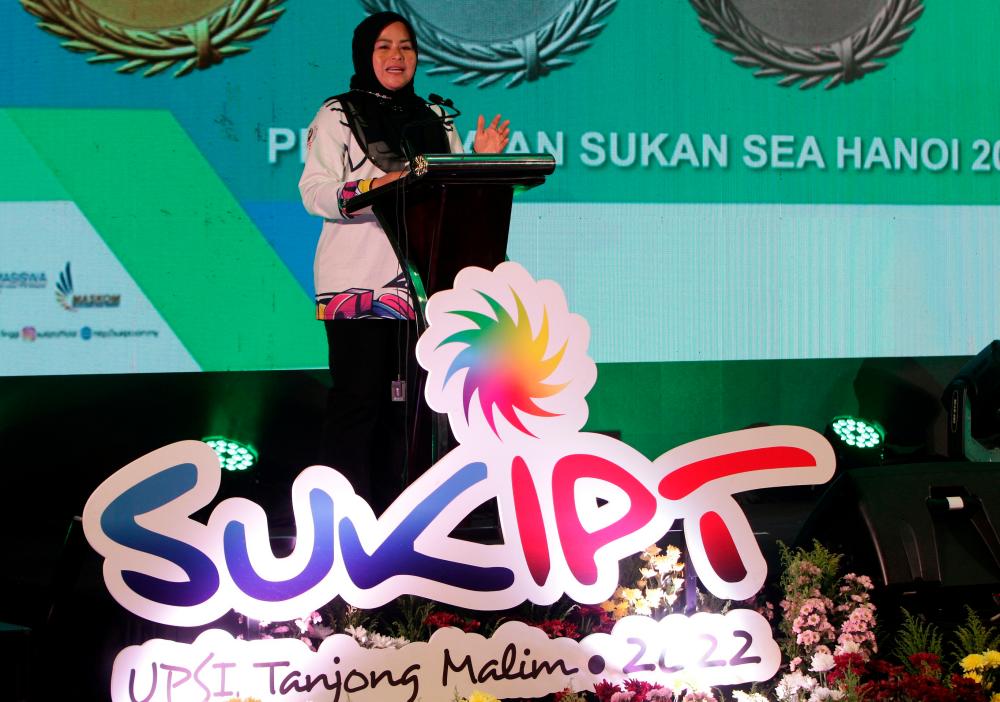 TANJUNG MALIM: The 2022 Institutions of Higher Learning Games (SUKIPT) is set to return from Aug 12 to 21 at Universiti Pendidikan Sultan Idris (UPSI) here after a two-year hiatus due to Covid-19.

Higher Education Minister Datuk Seri Dr Noraini Ahmad(pix) said over 6,000 athletes representing 70 contingents would be at UPSI to battle it out for the 210 gold medals offered.

“The Best Men’s and Women’s Team will receive RM7,000 in cash each and players who successfully hit a hole-in-one in golf will be offered RM1,000 in cash,” she said in her speech when opening SUKIPT 2022 at UPSI’s Sultan Azlan Shah Campus here today.

She added that cash prizes amounting to RM20,000 will be distributed among athletes who managed to break the national record at the sports meet, which was first held in 2012.

Noraini said the Sports Career Day would also be held by bringing together sports industry players, to enable participants and visitors to gain as much information related to careers in sports.

“I believe that SUKIPT 2022 will be one of the arenas for IPT athletes to showcase their best performance after almost four years of not being involved in national tournaments and indirectly allows them to make initial preparations to face major international tournaments in 2023.

“Even though this edition does not involve the participation of IPTs from Southeast Asian countries like before, I’m confident that the performance shown by all athletes could still place SUKIPT as one of the largest and high-standard sports events on par with other tournaments such as Malaysia Games,” she said.

Noraini also said the ministry was very committed to improving the standard of sports in the country through the organising of high-class national and international sports events to maintain the momentum of excellence of IPT and national athletes, including at the ASEAN University Games, World University Games, SEA Games and Commonwealth Games.

She added that IPT athletes were among the largest contributors of medals to the national contingent at the 2021 SEA Games in Hanoi, Vietnam, with 83 medals or 47.7 per cent of the 174 medals won.

“I was made to understand that the national IPT contingent will compete in the ASEAN University Games from July 27 to Aug 6 in Ubon Ratchathani, Thailand so I hope our athletes will continue to display their best performance and create success in the Southeast Asian stage,” she said.-Bernama