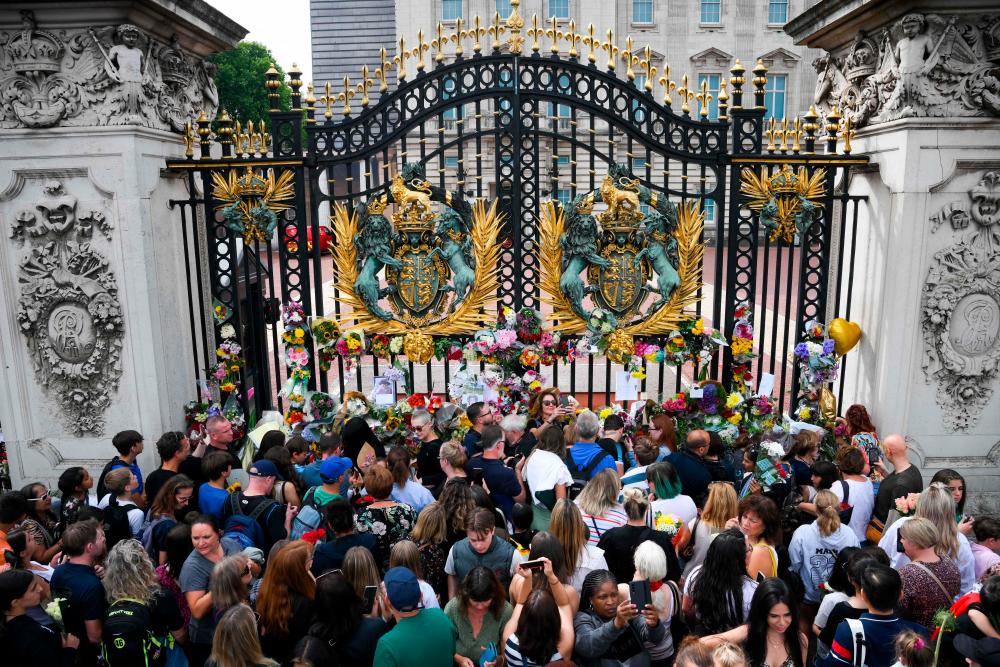 A general view of floral tributes on the gates at Buckingham Palace in London on September 11, 2022/AFPPix

The late monarch's coffin can be viewed by members of the public from Wednesday in Westminster Hall, while her funeral will take place in nearby Westminster Abbey on Monday.

Huge gatherings are expected also around Windsor Castle, west of the capital, where the queen will be buried.

Monday will be a public holiday across the United Kingdom, a government decision approved by King Charles III following the death of his mother last week, aged 96.

- 'Visitors from across globe' -

“Our hotels in central London and Windsor are literally sold out, and demand is... strong for our hotels situated near to a train or tube station throughout Greater London,“ according to budget hotel chain Travelodge.

Visitors are coming “from all corners of the UK and across the globe” to pay respects to Britain’s longest-serving monarch, it added in a statement.

Available rooms are set to remain scarce ahead of the funeral, said industry body UK Hospitality.

“Demand is certain to remain high right up until next Monday’s state funeral.”

Accommodation is also under strain owing to block bookings for extra police and other key personnel for before, during and after the high-profile event.

Hotel prices have rocketed in line with the strong demand.

A basic windowless basement room in Piccadilly Circus, central London, was available for £300 ($350) per night.

And another similar room was £315 per night near Paddington railway station.

The Snoozebox hotel in Stratford, east London, offering no-frills windowless rooms made out of shipping containers, has no availability until after the funeral.

Rooms have also been in short supply this week in Edinburgh, where mourners have thronged to view the queen's coffin before its journey to London.

“We do expect it to be extremely busy” in the next few days, said a spokesman for new British Prime Minster Liz Truss.

An estimated 200,000 visitors filed past the coffin of king George VI's widow queen Elizabeth in Westminster Hall in 2002.

“We expect to be far more than that,“ the spokesman added.

Some Londoners “may wish to change their working patterns accordingly” and work from home, he added.

Passengers “may wish to consider walking to their final destinations within the capital”, it added, noting road closures will be in place.-AFP