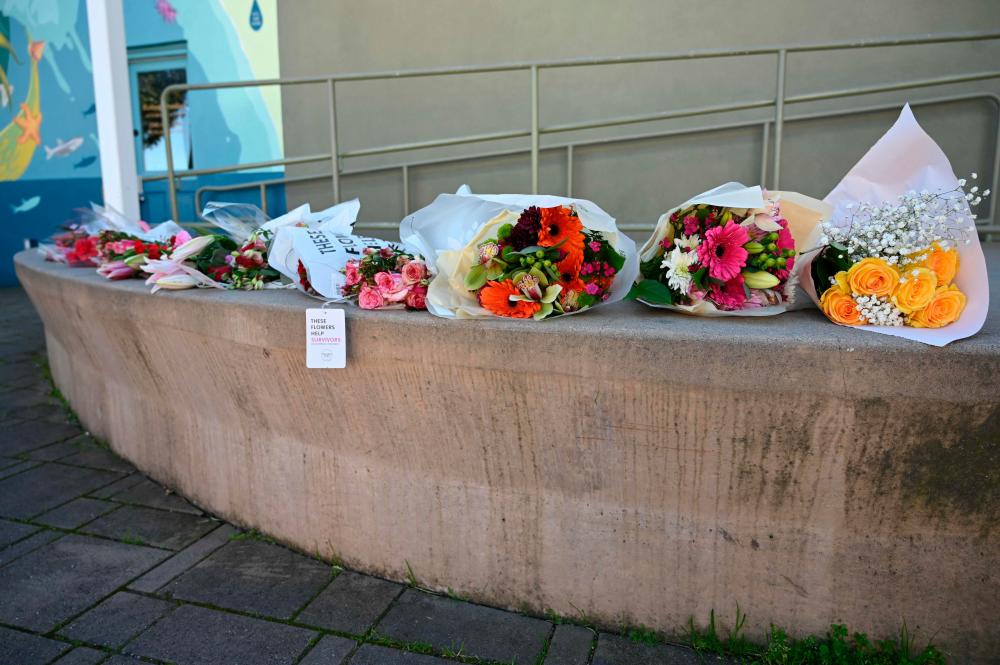 A row of bouquets placed across the street from the Half Moon Bay city hall in honor of the shooting victims in Half Moon Bay, California, on January 24, 2023/AFPPix

HALF MOON BAY: The man accused of shooting and killing seven farm workers near San Francisco in the latest of two back-to-back gun rampages in California that claimed 18 lives overall was due in court on Wednesday for his initial appearance before a judge.

Chunli Zhao, 66, the lone suspect in Monday’s massacre at two mushroom farms in the seaside town of Half Moon Bay, is expected to be formally presented with murder and other charges at the San Mateo County Superior Court in nearby Redwood City.

Also on Wednesday, U.S. Vice President Kamala Harris, a California native, planned to travel to the Los Angeles suburb of Monterey Park, where 11 people were fatally shot on Saturday night by a gunman who later took his own life.

Coming in quick succession, the two shooting sprees have left California reeling from one of the bloodiest spates of mass gun violence in decades in a state touted by its Democratic political leadership for some of the strictest firearm laws in the country.

Authorities said Zhao was taken into custody on Monday evening outside a sheriff’s station, where he had driven himself, apparently to surrender, a short time after the attack on farm workers.

The motive for the shooting remained undetermined. But authorities said Zhao had been employed by one of the growers, Mushroom Mountain Farms, and early evidence indicated the bloodshed stemmed from a workplace grievance. The second crime scene, Concord Farms, is about a mile (1.6 km) away.

The suspect was described as a resident of Half Moon Bay, a community of about 12,000 residents known for its foggy weather, fishing, and agriculture. The area was hard hit by a string of deadly “atmospheric river” storms that lashed much of the California coast with pounding surf, extreme winds and torrential rain for several weeks, starting after Christmas.

The shooting, coming on the heels of the storms, cast a renewed spotlight on hardships already faced by the area’s farm workers, many of them immigrants from Latin America and Asia, who live in squalid labor encampments and toil long hours under poor conditions for extremely low pay.

The Half Moon Bay killings unfolded two days after another gunman 380 miles (610 km) to the south opened fire at the Star Ballroom Dance Studio, a club frequented mostly by older patrons of Asian descent in Monterey Park.

Eleven people were shot to death and nine were injured in Saturday night’s gunfire, which some survivors and bystanders said they initially mistook for the Chinese firecrackers as the predominantly Asian-American community was observing the start of the Lunar New Year.

Authorities said the assailant, Huu Can Tran, 72, drove a short time later to a second dance hall in the neighboring town of Alhambra, but was disarmed without firing a shot in a struggle with that club’s operator.

The next morning, Tran shot himself to death behind the wheel of his getaway vehicle as police closed in on him south of Los Angeles, leaving investigators with few clues as to what precipitated the dance hall carnage.

Although his motive was a mystery, Tran was known to have been a longtime regular of the Star Ballroom. At least one acquaintance - a tenant of a Los Angeles-rental property he owned - suggested Tran may have been nursing a grudge against other patrons there.

Harris, a Democrat, who served as state attorney general and a U.S. senator from California before becoming both the first African-American politician and first Asian American elected vice president, planned to pay a visit to Monterey Park and “to mourn its victims” on Wednesday, the White House said in a statement.

The shootings in both Monterey Park and Half Moon Bay were notable for the retirement age of their respective suspects, much older than typical perpetrators of deadly mass shootings that have grown all too commonplace in the United States.

Authorities said the two men both used a semi-automatic pistol, and the victims of both attacks came from immigrant communities.

The theory of a workplace-related disagreement at the root of the Half Moon Bay violence seemed buttressed by court records, obtained by the San Francisco Chronicle, showing that a restaurant co-worker had obtained a restraining order against Zhao after accusing him of assault and death threats, the newspaper reported on Tuesday. The court order is no longer in effect. 1.North Korea condemns US decision to send tanks to Ukraine

4.DPM: Govt agrees to give allocation to improve police facilities in Sarawak