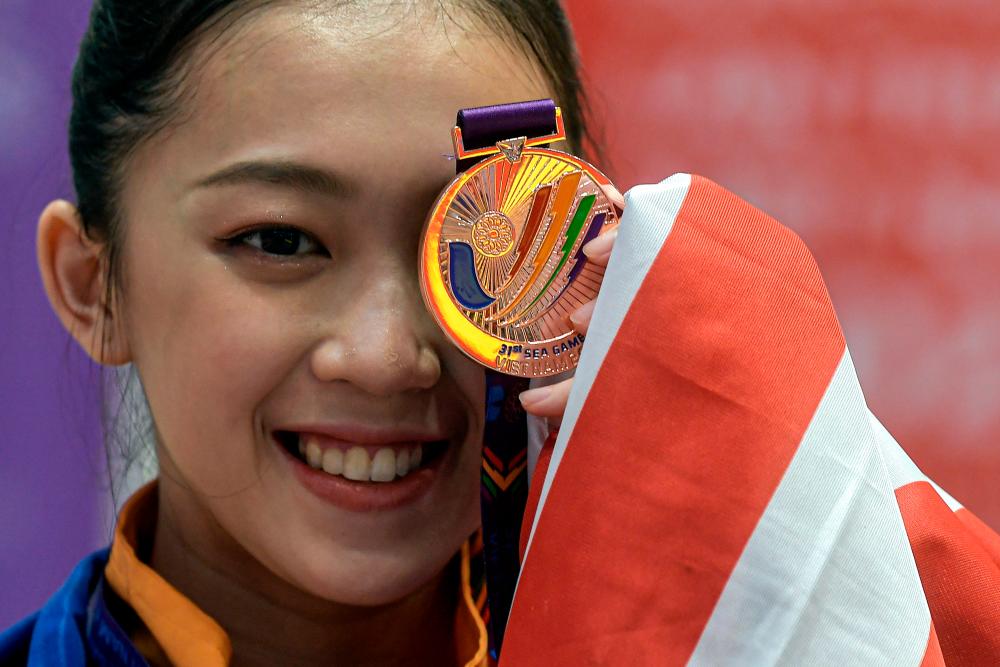 HANOI: There was hardly any sign of joy in national wushu exponent Sydney Chin Sy Xuan(pix) over her bronze medal success in the 31st SEA Games except to dedicate the medal to her late mother who passed away of a heart problem on Monday (May 10).

Sydney Chin said her mother, Hon Wai Cheng, 48, was an important figure who gave her words of encouragement so that the athlete stayed active and excel in the sport.

The 23-year-old exponent said her mother died one day before she left for Hanoi on May 11 at their residence in Cheng, Melaka.

“When I was in the National Sport Council, my father told me the sad news that my mother had passed away. So MSN arranged for me to return to Melaka. After that my coach asked if I wanted to continue to participate in the SEA Games.

“I told my coach I want to compete in Hanoi and I was satisfied I managed to win a bronze medal. I know my mother look at me up there. I am dedicating the medal to my mother and I believe she would be proud with the success,” she said with teary eyes .

At the Cau Giay Gymnasium here today, Sydney Chin took the bronze medal in the women’s taijiquan after collecting 9.68 points while compatriot Mandy Cebelle Chen was placed seventh with 9.41 points.

The gold medal was won by Indonesia’s Alisya Mellynar who amassed 9.71 points while the silver went to Agatha Chrystenzen Wong of Philippines with 9.69 points.

Meanwhile, the national wushu camp ran out of steam on the second of competition after delivering two gold medals yesterday.

The gold medal was won by Brunei’s Mohammad Adi Salihin Roslan who received 9.71 points while the silver and bronze medals went to Harris Horatius of Indonesia and host athlete Nong Van Huu who were awarded 9.70 and 9.69 points.

Tan Zhi Yan who was in action in the men’s taijijian also failed to contribute any medals when he could only managed the fourth placing with 9.68 points.

Singapore’s Chan Jun Kai took the gold after collecting 9.72 points followed by Nicholas Nicholas of Indonesia and Jones Llabres Inso of the Philippines with 9.71 and 9.70 points respectively.

The wushu squad also failed to shine in the women’s qiangshu event after Pang Pui Yee finished her challenge in the fifth place with 9.67 points.

Host exponent, Duong Thuy Vi won the event with 9.70 points while the silver and bronze medals went to Myanmar’s Sandy Oo and Dang Tieu Binh of Vietnam, after both received 9.69 points.-Bernama