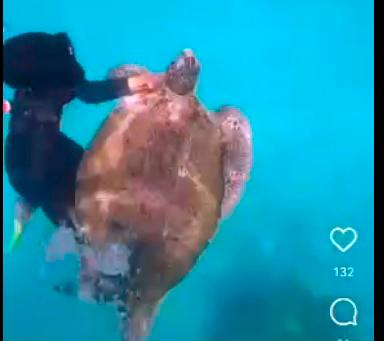 KUALA TERENGGANU: The Terengganu government has instructed the Marine Park Department to conduct a detailed investigation into a video showing an individual holding a turtle at Pulau Redang in Kuala Nerus recently, which has since gone viral on social media.

State Tourism, Culture and Digital Technology Committee chairman, Ariffin Deraman, said the act of holding a turtle is an offence under Section 27 of the Fisheries Act 1985.

”Under the act, no person shall fish, disturb, harass, catch or take any aquatic mammal or turtle. The state government regrets the incident and hopes it will not recur,” he said when contacted today.

Last Tuesday, a 24-second video, showing a boat crew member diving and carrying a turtle almost to the water surface, believed to be at Teluk Dalam, Pulau Redang, went viral.

The video drew criticism from netizens as this is against the law and turtles are classified as endangered and protected by the government.

Meanwhile, Pulau Redang Boat Operators Association vice president Azmi Awang, when contacted, hoped that stern action would be taken against those involved in the viral video so that there will not be a repeat of such acts.

“We regret the unethical actions of the boat operators who entered the Redang Island marine park to bring tourists to see turtles.

“Every boat operator should be aware of the rules enforced and tourists must be reminded not to touch turtles while snorkeling,” he said.-Bernama