‘Takiyuddin should resign, not merely apologise’ 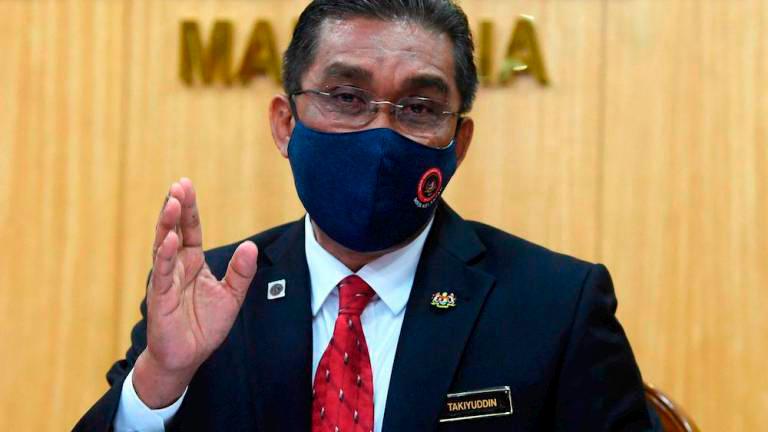 PETALING JAYA: Calls have been made for de facto Law Minister Datuk Seri Takiyuddin Hassan(pix) to not only apologise but also be sacked from the Cabinet for announcing last week that the Emergency Ordinances (EO) had been revoked.

“In fact, the King was not even given the opportunity to review it. Even after the royal assent has been secured, the order for the revocation will have to be gazetted to become effective,” he told theSun.

“It (the EO) is not revoked when you merely inform the King. According to the law, the King has (to be given) up to 30 days to assess any Act of Parliament before it becomes law.”

Hector said the Cabinet could have informed the King but it “jumped the gun” by declaring that the EO had been revoked without receiving the royal assent and before the instrument (for the revocation) had been gazetted.

Constitutional lawyer Fahri Azzat, who described the situation as “an embarrassment”, said Takiyuddin, being the minister responsible, “will have to go”. “The Cabinet should make an example of him. We are shocked by his action. It’s not a matter of just tendering an apology. It’s a matter of principle.”

Another constitutional lawyer Kokila Vaani Vadiveloo said that if the minister had misled the Dewan Rakyat, any member of Parliament (MP) could refer the matter to the Committee of Privileges, which is responsible for considering matters related to (the behaviour or actions of) members of the House.

“It is pertinent to note that while Article 63(2) of the Federal Constitution states that lawmakers will not be liable for actions and speech that are part of parliamentary proceedings, a subsequent article countermands this for actions under the Sedition Act 1948 and laws enacted under Article 10(4) that protect the national language, bumiputra quotas and the Malay Rulers.”

She pointed out that Prime Minister Tan Sri Muhyiddin Yassin’s statement on July 26 further confirmed the fact that the revocation of the EO had not been signed by the King.

“Under 150(3) of the Federal Constitution, once Parliament sits, the government loses its right to revoke, so it can only be annulled in Parliament.

“The King is therefore right in stating that the ordinances now need to be voted on in the House.”

The lawyers were commenting on a recent statement by Padang Rengas member of Parliament Datuk Seri Mohamed Nazri Abdul Aziz that Takiyuddin owed the King an apology for prematurely announcing the EO revocation.

The King had expressed his “immense regret” over the revocation without his decree as it was not presented to him.

His statement led to calls by opposition lawmakers for the resignation of Takiyuddin and Speaker Datuk Azhar Azizan Harun.

“The Cabinet, MPs, and speaker must discharge their duties with honesty and integrity, being fully transparent and accountable as this is the time when Malaysians need to be able to trust their government.