The mirage of economic recovery 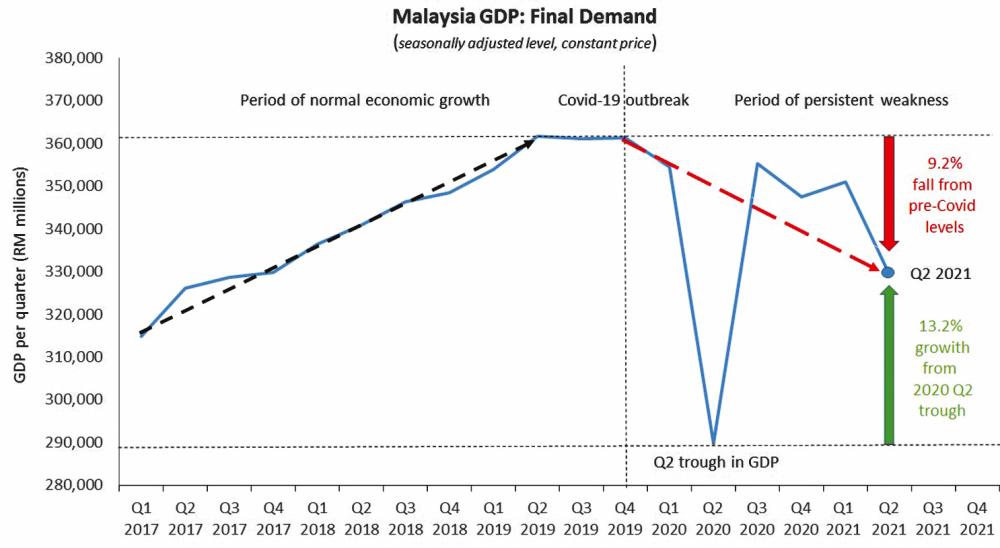 THE eagerly awaited economic growth figures for the second quarter (Q2) announced on Friday were hailed as a signal of recovery with a rebound in gross domestic product (GDP) of 16.1% compared with the same period last year.

According to our analysis the situation is very different and the most likely scenario for the rest of the year will be ugly or even very ugly unless there is a significant change in policy.

The “tipping point” that we have identified before in our series of analyses has already arrived and in reality the latest very worrying data for the second quarter leaves no doubt about it.

It confirms all of the concerns already highlighted by entrepreneurs and households in industry surveys that a vicious cycle and recessionary spiral may have already started.

The annual (Y-on-Y) headline growth figure of 16.1% is misleading because it depends so heavily on recovery from the very low base in Q2 2020.

It is much more informative to focus on the “traction” of the economy, reflected in the quarterly (Q-on-Q) change in GDP and its components

Seasonally adjusted GDP fell by 2% in Q2 compared with Q1, when it grew by only 2.7% on a quarterly basis.

This simple comparison reveals the stagnation not the recovery of the economy in the first half of the year.

If we look at the components of GDP we get a better idea about the negative scenario developing under the headline figure.

Looking at domestic demand, which is the sum of consumption, investment and government expenditure, the demand side contracted by 8.2%.

This is barely enough to replace the 2.6% contraction in Q1, so even on the trade balance the first half of the year was stagnant.

Taking domestic and foreign demand together, we had a contraction of 6.2% in Q2 compared with Q1.

The last component of GDP is the change in inventories or stocks which is usually not analysed.

Stocks contributed 4.2% to GDP in Q2 and adding this contribution to the contraction in the other demand components, we arrive at the final overall contraction of 2% in Q2 GDP compared with Q1.

These are the two faces of the economic challenges that Malaysia is facing.

First a contraction of 6.2% in final demand and second, an increase in inventories by 4.2% which is a mirror of the first.

Households have lost spending capacity. Average salaries fell by 9% and median salaries fell 15.6% so more than half of salaried employees earn less than RM2,062 per month now. Unemployment and underemployment have increased which also cut household income.

Around 3.4 million people are unemployed or underemployed, accounting for 19.8% of the workforce.

Debt has risen and when the loan moratorium ends, repayments will begin again at higher rates.

The weakness of household spending has become a structural problem that is also clearly reflected in the statistics on retail and wholesale sales, and the quarterly contraction of the services sector, which is the biggest sector of the economy.

This weakness in spending left many products unsold and so inventories rose. This added to GDP in Q2 but will be reversed in Q3 because production will be cut to allow stocks to be sold.

The contraction in sales and profits since the beginning of the crisis and existing unutilised capacity is at the main explanation for the contraction of fixed investment in Q2, which continues a negative trend that started well before the Covid-19 crisis.

The structural weakness of the economy, clearly reflected in the recent data, confirms that we have arrived at a “tipping point” where an increasing number of businesses are closing their activities and with a larger proportion of the population struggling to survive.

From the surveys we know that many companies are running out of time and are approaching a point of no return in which the stagnant phase of the economy will turn into a full-blown recession and risk falling into a depression. We are already in the second year of recession.

According to a survey from the Ministry of Entrepreneur Development and Cooperatives 90% of micro, small and medium enterprises cannot last until October or November, and if the lockdown continues until then 580,000 might close.

Many firms won’t survive, some will have lost markets and customers which won’t return, and of course 150,000 may already have closed according to industry estimates.

The impact of these factors on the level of the final demand is the best gauge of the current economic reality. Compared with the trough in Q2 2020, GDP has expanded by 13.2% but compared to the pre-crisis levels, GDP has fallen by 9.2% and is on a clear downward trend. There is no recovery path and the picture reflects a situation that is becoming more and more critical.

Based on the latest data we have made some preliminary updates of our forecasts for 2021. We forecast the annual rate of growth to be between 1.0-2.0%, which is less than half of what Bank Negara expects.

So contrary to the claim that Malaysia is on the road to recovery, the latest GDP data show clearly that the current state of the economy is in a critical condition and that 2021 will very likely be another year of contraction.