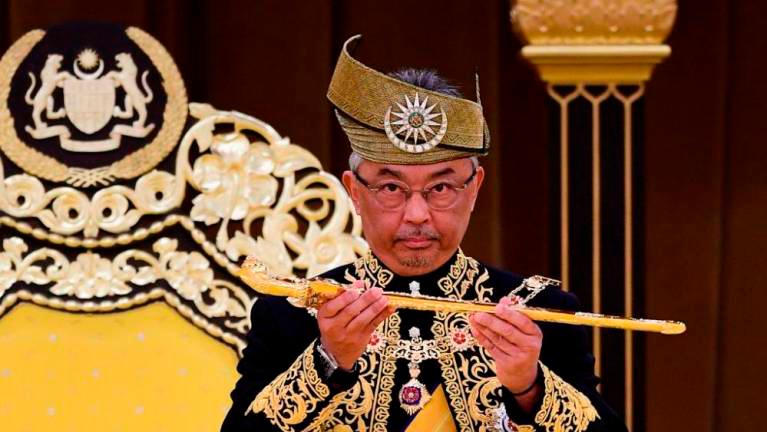 KUALA LUMPUR: The Yang di-Pertuan Agong Al-Sultan Abdullah Ri’ayatuddin Al-Mustafa Billah Shah(pix) has expressed “utmost disappointment” with a statement made in Parliament on Monday that the government had revoked all Emergency Ordinances under the ongoing Emergency without his consent.

Comptroller of the Royal Household for Istana Negara Datuk Ahmad Fadil Shamsuddin said the King was also very disappointed that his decree to Minister in the Prime Minister’s Department (Parliament and Law) Datuk Seri Takiyuddin Hassan and Attorney-General Tan Sri Idrus Harun for the proposed revocation of all the ordinances to be tabled and debated in Parliament had not been carried out.

“His Majesty stressed that the statement by the minister in Parliament on July 26 is inaccurate and has misled the members of the Dewan Rakyat,” he said in a statement yesterday.

Ahmad Fadil said the King also stressed that the revocation of the Emergency Ordinances effective Monday was done in haste, without tabling the matter in Parliament.

He said Al-Sultan Abdullah stressed that the contradictory and misleading statements in Parliament had not only failed to uphold the rule of law principle in the Rukun Negara, but also ignored the functions and powers of the King as the Head of State as enshrined in the Federal Constitution, Bernama reported.

“His Majesty stressed that under the Constitutional Monarchy and Parliamentary Democracy system, which is based on the supremacy of the Constitution, all quarters must abide by the rule of law.

“Article 150(2B), read together with Article 150(3) of the Federal Constitution, clearly gives the power to promulgate and revoke the Emergency Ordinances to the King,” he said.

Ahmad Fadil said the King was aware that he shall act in accordance with the advice of the Cabinet as stated in Article 40(1) of the Constitution. But as the Head of State, the King has the responsibility to advise and issue reprimands in the event of any unconstitutional action by any party.

Ahmad Fadil said Al-Sultan Abdullah nevertheless expressed appreciation to the government on the execution of the Parliament meeting that began on Monday, in line with the recommendations of the Malay Rulers during their special discussion on June 16.

“His Majesty also takes this opportunity to call on the people to pray together that the country is always under the protection of Allah SWT, spared from disasters and that the Covid-19 pandemic can be curbed and ended soon,” he added.