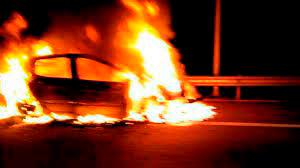 PORT DICKSON: Three individuals escaped fiery death when the car they were travelling in caught fire after being involved in an accident at KM 2.3 of the Seremban-Port Dickson Highway early this morning.

He said the department received a distress call at 3.42 am and seven firefighters including an officer were rushed to the scene.

“The car was totally destroyed. However, the victims managed to escape to safety,” he told Bernama when contacted today.

He added that all the victims who suffered minor injuries were sent to the Port Dickson Hospital for treatment.-Bernama

Boris criticized over video of staff joking about lockdown party

2.Boris criticized over video of staff joking about lockdown party

4.MOH to ensure those with ‘Long Covid” get sufficient treatment