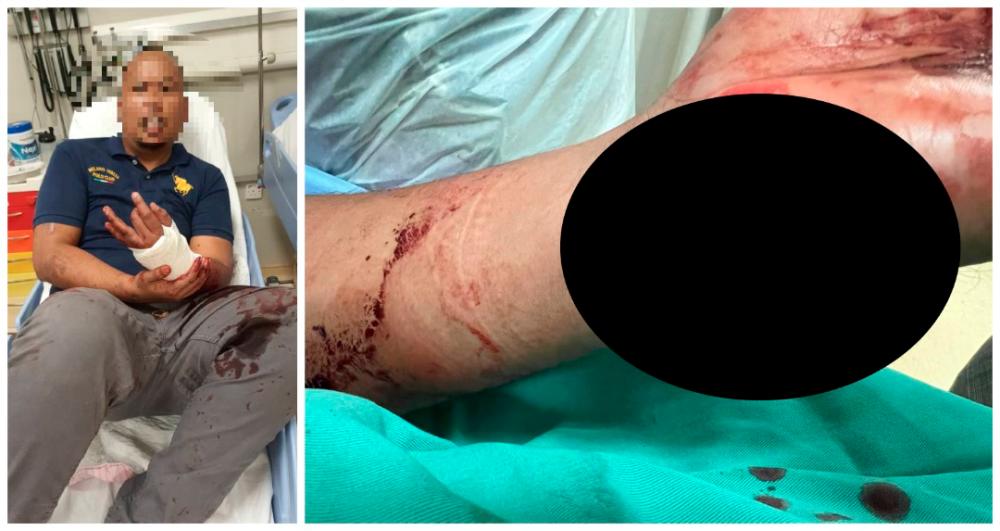 Mohammad Ridzuan is in stable condition and is warded at the Selayang Hospital, where he will undergo surgery/ PDRMpix

SHAH ALAM : Two policemen suffered serious injuries after being slashed with a parang by a man who ran amok at Kampung Sungai Kandis in Section 36 here on Monday.

The attack by the suspect, who was high on drugs, almost severed the left hand of 31-year-old Lance Corporal Mohammad Ridzuan Marsudi, while 30-year-old Inspector Mohd Zulhusni Hasani suffered deep slash wounds to his right hand.

Shah Alam police chief ACP Mohd Iqbal Ibrahim said today that the 47-year-old suspect had earlier caused a commotion in the area when he crashed his four-wheel drive pick-up truck into his older brother’s car at about 3.45pm.

He said the suspect went on to smash several flower pots on his brother’s car before chasing the 53-year-old retired teacher with a parang.

Mohd Iqbal said police were alerted to the incident before Mohd Zulhusni, Mohamad Ridzuan, and several other policemen were dispatched to the scene to investigate.

“The suspect lived alone while his older brother lived next door. He had run amok following a misunderstanding with his brother and started damaging things at his house. When we arrived the scene, the suspect had gone into hiding in his house and refused to give himself up. When the police team managed to enter his house, the suspect lunged at Mohammad Ridzuan and swung a parang at him.” he said.

Mohd Iqbal said Mohammad Ridzuan pulled out his pistol and fired a warning shot into the air, but the suspect continued to attack and injured him.

He said in an ensuing struggle to subdue the man, Mohd Zulhusni was also injured when the suspect slashed him.

Mohd Iqbal said the suspect was arrested and tested positive for drug abuse.

He said the man who was remanded for three days has a past criminal record for using criminal force on a civil servant.

Mohd Iqbal said the man is being investigated for causing grievous hurt and attempted murder.

He said Mohammad Ridzuan is in stable condition and is warded at the Selayang Hospital, where he will undergo surgery, while Mohd Zulhusni was discharged this morning after being treated for his injuries.