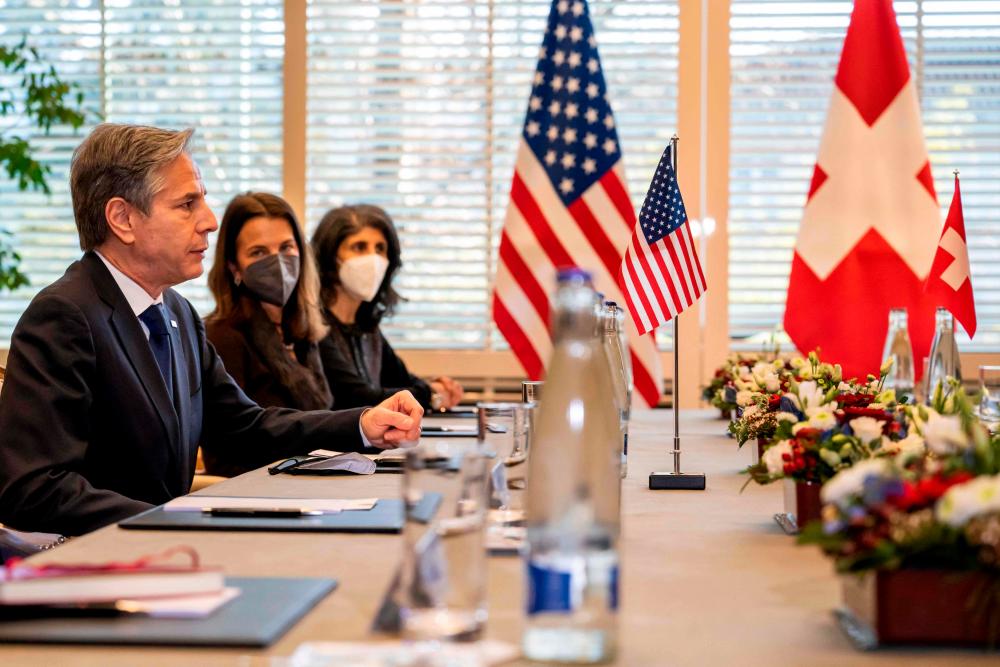 GENEVA: Washington and Moscow's top diplomats on Friday agreed to keep working to ease tensions over Ukraine, with the United States promising a written response to Russian security requirements next week and not ruling out a presidential meeting.

As fears grew that Russia could invade its pro-Western neighbour, US Secretary of State Antony Blinken renewed warnings of severe Western reprisals as he met with Foreign Minister Sergei Lavrov in Geneva.

Russia’s foreign ministry said later that, in his talks with Blinken, Lavrov had warned of “the most serious consequences” if Washington ignored Moscow’s security demands.

Russia has massed tens of thousands of troops on the Ukrainian border, denying it plans to invade but demanding security guarantees, including a permanent ban on the country joining NATO.

Blinken told reporters no major breakthroughs had been expected but he believed the two sides were “now on a clear path” to understanding each other’s concerns and positions.

Speaking separately, Lavrov told reporters “Blinken agreed that we need to have a reasonable dialogue, and I hope emotions will decrease.”

He added that another meeting could be held between the two, but that it was “premature” to start talking about another summit between Presidents Joe Biden and Vladimir Putin, who met in Geneva last June.

Blinken did not rule out fresh talks between the leaders, after Biden twice warned Putin by telephone of consequences for any Ukraine invasion.

Biden bluntly assessed on Wednesday that Putin is likely to “move in” on Ukraine and warned of a “disaster for Russia” if he did.

The United States has announced large-scale NATO naval exercises in the Mediterranean beginning on Monday and with the participation of the aircraft carrier USS Harry Truman.

US officials have insisted the maneuvers had nothing to do with Ukraine.

But the announcement of the naval drills came a day after Russia announced its own all-out naval exercises, with more than 140 warships and about 10,000 soldiers taking part in January and February in maneuvers that will take place in the Atlantic, the Arctic, the Pacific and the Mediterranean.

He added that he and Blinken had discussed further strengthening Ukraine's defences.

Washington then announced Saturday the first shipment of assistance to Ukraine had arrived to “bolster its defenses in the face of growing Russian aggression.”

“The shipment includes close to 200,000 pounds of lethal aid, including ammunition for the front line defenders of Ukraine,“ the US embassy in Kyiv tweeted.

A day earlier, Estonia, Latvia and Lithuania said they would send anti-tank and anti-aircraft missiles to allow Ukraine to defend itself “in case of a possible Russian aggression” after receiving authorisation from Washington.

Canada, meanwhile, has offered a loan of Can$120 million (US$95 million) to support the country’s “economic resilience” in the face of Russian efforts to destabilise it, Prime Minister Justin Trudeau said Friday.

Russia, which already fuels a deadly insurgency in eastern Ukraine that has killed more than 13,000 people since 2014, has demanded guarantees that NATO never admit the ex-Soviet republic or otherwise expand in Moscow's former sphere of influence.

The United States has declared the idea a “non-starter”.

Earlier on Friday Russia reiterated demands for the “withdrawal of foreign forces, hardware and arms” from countries that were not NATO members before 1997 -- singling out Bulgaria and Romania, former members of the USSR’s Warsaw Pact treaty, who joined NATO in 2004.

Biden administration has said it is willing to speak to Moscow about its security concerns.

One proposal by Washington is to revive restrictions on missiles in Europe that had been set by the Intermediate-Range Nuclear Forces Treaty, a Cold War accord trashed by the administration of former president Donald Trump.

Russia has not rejected the proposals but says that its core concern is Ukraine and on Thursday announced massive naval drills as a show of force.

The United States has warned that the clock is ticking, alleging that an invasion could come shortly and be preceded by a “false-flag” operation as Russia tries to trigger a casus belli against Ukraine.

Blinken said he asked Lavrov to prove Russia has no intention to invade, suggesting Moscow start “by de-escalating, by bringing back -- removing -- those forces on Ukraine’s border.”

Lawmakers in Russia's parliament have presented a bill that would ask Putin to recognise the independence of two pro-Moscow separatist territories in Ukraine, Donetsk and Lugansk.

Blinken travelled to Geneva after a trip to Kyiv and talks with Britain, France and Germany in Berlin.-AFP