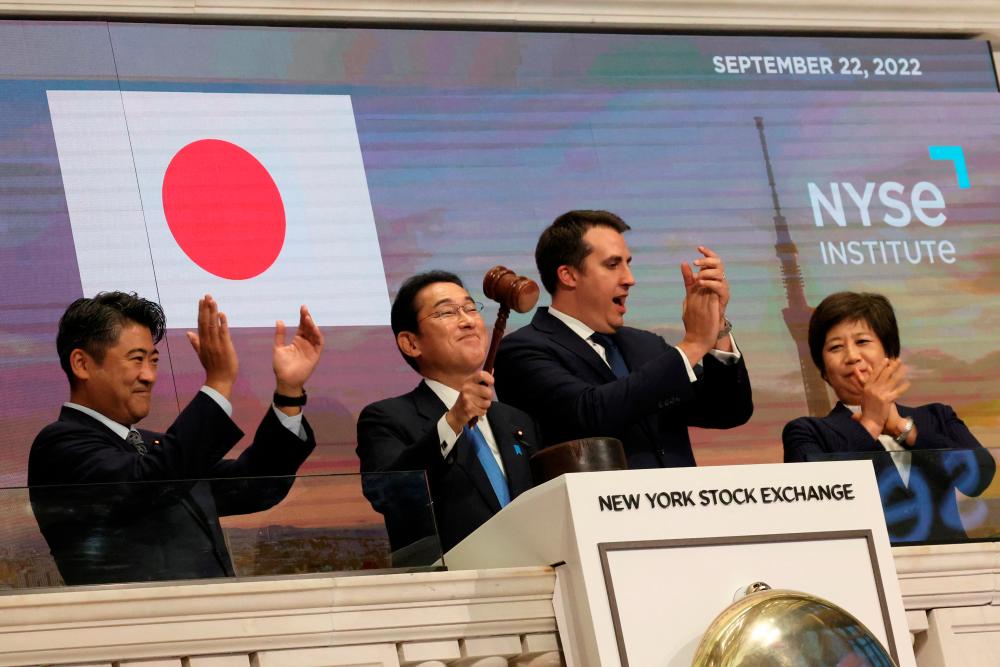 Japanese Prime Minister Fumio Kishida banging the gavel to signal the end of trading after ringing the closing bell at the New York Stock Exchange on Thursday, Sept 22. He said in a speech that excessive movement in the yen due to speculation cannot be overlooked and that his government will act ‘with a high level of vigilance’ and intervene to support the currency again if necessary. The Bank of Japan on Thursday bought yen to prop up the currency for the first time since 1998. – Reuterspix

The Bank of England on Thursday announced its second consecutive half-point rate increase and warned the British economy was slipping into recession. Others to tighten the screws include the European, Swiss and Norwegian central banks.

Losses on New York followed drops of nearly 2% on Wednesday after the Fed announcement of another super-sized rate increase, and came on the heels of declines earlier Thursday in most overseas bourses.

“If we continue to have sticky inflation, and if (Fed chair Jerome) Powell sticks to his guns as he indicates, I think we enter recession and we see significant drawdown on earnings expectations,” said Mike Mullaney, director of global markets at Boston Partners.

“If this happens, I have high conviction under those conditions that we break 3,636,” he added, referring to the S&P 500’s mid-June low, its weakest point of the year.

Among individual companies, Tesla shares fell 4.1% as it recalled 1.1 million vehicles due to a defect with the automatic window system that poses risks of pinching a driver’s finger.

FedEx climbed 0.8% as it announced plans to cut up to US$2.7 billion in spending in the wake of a slowdown in demand.

Major US airlines – which have enjoyed a rebound amid increased travel as pandemic restrictions end – were also down, with United Airlines and American Airlines falling 4.6% and 3.9% respectively. This took losses in the last three days to 11% for United and 10.6% for American.

JetBlue Airways Corp, off 7.1% and also recording a third straight loss, closed at its lowest level since March 2020. – AFP, Reuters