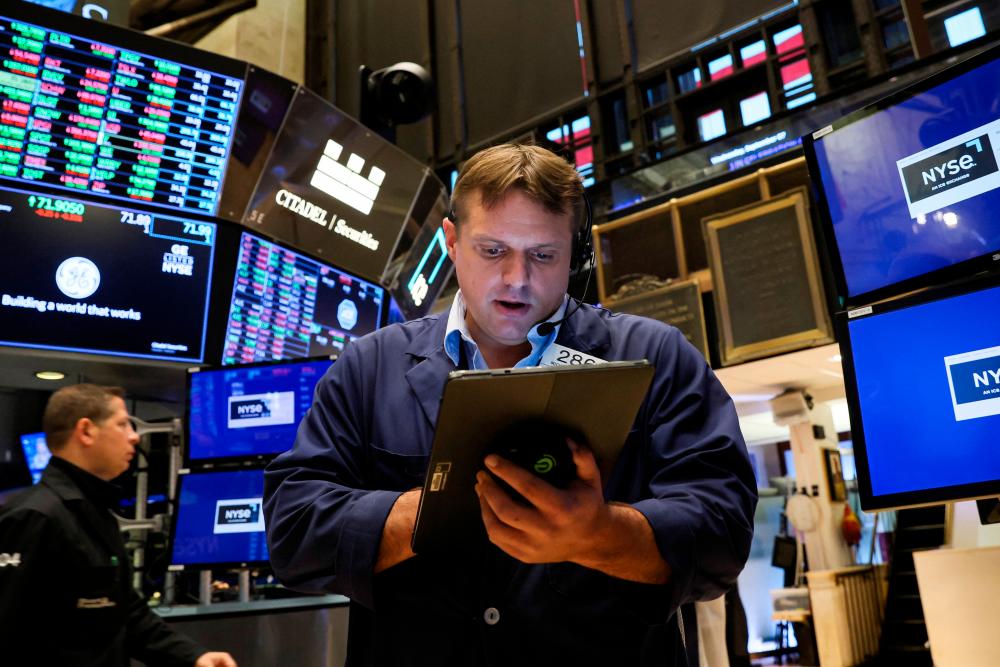 Trader working on the floor of the New York Stock Exchange. – Reuterspix

NEW YORK: US shares ended with modest gains on Thursday (Sept 8), recovering from early losses in the wake of the European Central Bank’s (ECB) largest rate increase ever and more hawkish comments from the US Federal Reserve (Fed).

Prior to the close, the New York Stock Exchange observed a minute of silence to honour the passing of Britain’s Queen Elizabeth II, the nation’s longest-serving monarch.

Indices bounced back and forth in choppy trading as concerns over Federal Reserve's next steps to tame a surging inflation remain.

“There’s just a lot of uncertainty and I think people aren’t going to really make up their minds for longer than five minutes or five seconds, you know, until there’s a little bit more clarity or light at the end of the tunnel,” said Grace Lee, an equity income senior portfolio manager at Boston-based Columbia Threadneedle Investments.

After the double blow from the central banks working to combat surging inflation by front-loading aggressive steps, Wall Street equities bounced back from a midday slump, with gains accelerating late in the trading session.

ECB policymakers raised the key policy interest rates by 75 basis points and promised more rate increases, while Fed chair Jerome Powell reaffirmed his message that the US central bank must continue to act “strongly” to avoid a repeat of the inflation surge of the 1970s and 1980s.

“We need to keep at it until the job is done to avoid ... the kind of very high social costs” of that era, Powell said on Thursday, echoing the major speech he made two weeks ago, while again dousing investor hopes the Fed might pivot to rate cuts in the near future.

Chicago Fed president Charles Evans joined his fellow policymakers in saying that reining in inflation is “job one.”

Money market traders see 87% odds that the Fed will raise rates by 75 basis points at this month's meeting.

Among individual stocks, spice maker McCormick & Company fell 6.7% after it lowered its 2022 earnings and sales forecast on Thursday citing pressures on consumers and supply chain problems.