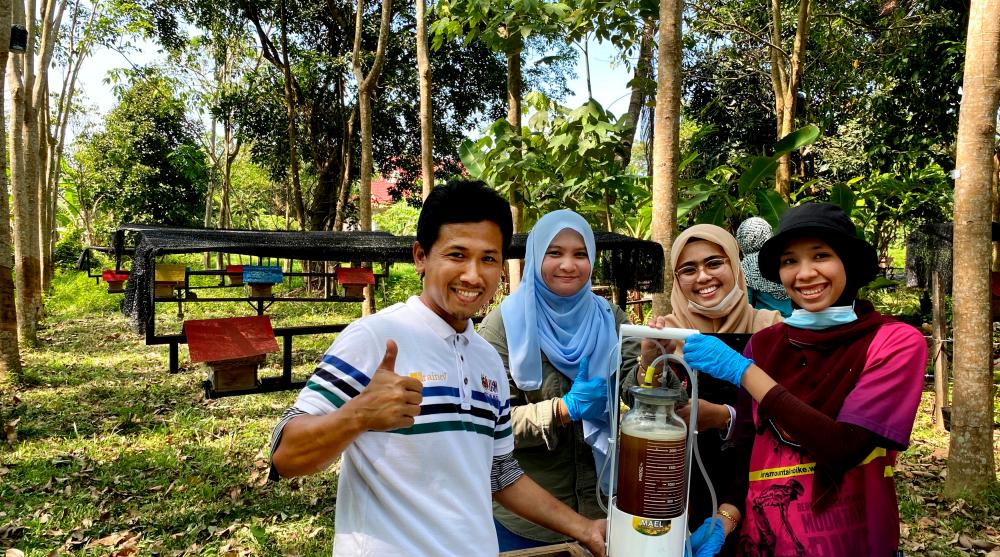 KUALA LUMPUR: Kelulut or stingless bee honey has been gaining popularity ever since it was recognised as a superfood by the Malaysian Agricultural Research and Development Institute (MARDI) in 2016 due to its high nutrient and antioxidant content.

However, experts caution that harvesting of the honey, whether in the wild or in farms, must be carried out in a sustainable manner to maintain bee populations. This is because bees are vital to the ecosystem as they act as plant pollinators, indirectly resulting in improved plant pollination and increased crop production by up to 40 percent.

Universiti Sains Malaysia (USM) senior lecturer in neuroscience Dr Mohd Zulkifli Mustafa, who has also carried out substantial research on kelulut bees, said the number of wild bee colonies in Malaysia and other countries has been steadily declining, threatened by habitat loss brought about by logging activities, the expansion of residential developments into virgin forests and use of pesticides on farms.

“When bee hunters cut down whole trees in the forest to get hold of bee colonies, the plant pollinations will be affected, thus flora and fauna get destroyed too,” said Mohd Zulkifli, a veterinary surgeon by qualification with a PhD in neuroscience whose research interests revolve around molecular neuroscience and bee cognition as well as social innovation in the stingless beekeeping industry.

He said in the case of wild kelulut bee nests, the bee hunters would usually cut down the trees in order to obtain the bee colony brood and the queen bee.

“Instead of cutting down the tree, it’s best that they practice the eduction technique and (place the brood) into a standard man-made hive. Swarm traps can also be applied (for the bees to move into). If they (hunters) can get the queen bee as well and place the (man-made) hive at the initial location, the rest of the bees (in the colony) will also move to the hive within a few hours,” he explained, adding that this was a much more sustainable way to acquire the kelulut bees and their honey.

He said USM has now embarked on queen bee breeding to expedite colony reproduction to fulfill the demand for kelulut honey.

Mohd Zulkifli said compared to the tualang stinger bees which mainly nest in the jungle and far off the ground, the kelulut bees build their nests in already existing cavities or hollowed-out areas of trees, buildings and hives.

“This nesting behaviour provides the opportunity for these stingless bees to be cultivated in intensive farms with controlled environmental conditions or in homes in rural areas with standard operating procedures in place,” he said, adding that the empowerment of today’s stingless bee industry would have a direct impact on the production of high-quality honey, while also sustaining pollination of crops and other plants to maintain biodiversity.

He said currently in Malaysia, there are more than 50,000 commercially farmed beehives, of which 6,000 are stingless beehives with the largest ones located in Sarawak and Kelantan.

He also said that stingless bee honey has had a long history of traditional indigenous use with a range of purported therapeutic properties, including its antidiabetic and antioxidant activity.

“Thus, beekeeping should be regarded as a prime tool to achieve sustainable development,“ he told Bernama recently.

Malaysian Nature Society (MNS) president Prof Dr Ahmad Ismail said there should be more awareness on bee conservation, especially among farmers and villagers living near oil palm and rubber plantations who should be discouraged from using pesticides or carrying out fogging activities, as well as destroying wild bee nests.

MNS, meanwhile, signed a memorandum of understanding with Corak Rentak Sdn Bhd last month to support the conservation of the stingless bee.

“We will be sponsoring the MNS membership fee for one year for purchasers of DEIRA (Kelulut) Stingless Bee Honey through Shopee and Lazada during a campaign, which will run for a month.

“At the same time, commercial farming of kelulut bees can also help to increase the incomes of the B40 community through sustainable beekeeping practices that protect the environment,“ she said.

She added that as part of its Corporate Social Responsibility programme, the company will be developing the Bee Engagement Entrepreneurship (BEE) project whereby “seed money donated by family and friends are used to start bee farming communities for the B40s/Asnaf (hardcore poor), starting first in Kelantan state”.

Ahmad said through their collaboration with Corak Rentak, MNS hopes to recruit between 3,000 and 5,000 new members. For details on MNS’ recruitment campaign, please visit https://www.mns.my/

Mohd Zulkifli said more than 35 stingless bee species have been identified in Malaysia but only two species are commercially cultivated to harvest the honey.

“Unlike honey bees, stingless bees are generally harmless to humans and domesticated animals, and are great pollinators too. Besides, they are also more resistant to the diseases and parasites that affect honey bees (that can sting),” he said.

Stingless bees are smaller in size, about seven millimetres to 10 mm long, and also have a shorter flight range of 500 metres – making it easier to keep them among crops for pollination. In comparison, stinger honey bees are 12 mm to 25 mm long and have a flight range of two kilometres.

Stingless bees can produce an average of three kilogrammes of honey per colony each year, with its harvest time being between March and September.

He also said that a study conducted by USM showed that kelulut honey improved spatial working memory after one tablespoon of the honey was consumed per day over a seven-day period.

He said the researchers in Universiti Putra Malaysia and the University of Queensland, Australia, also found that up to 84 percent of the Kelulut honey's sugar comprised trehalulose, which is a rare sugar with a low glycaemic index (GI).

“Traditionally it has been thought that stingless bee honey was good for diabetes and now we know why – having a lower GI means it takes longer for the sugar to be absorbed into the bloodstream, so there is no spike in glucose that you get from other sugars.

“People have patented ways of making trehalulose synthetically but it costs much higher than the natural honey. Current research shows that stingless bee honey can be used as a whole food on its own or in other food to get the same health benefits,” he added. -Bernama