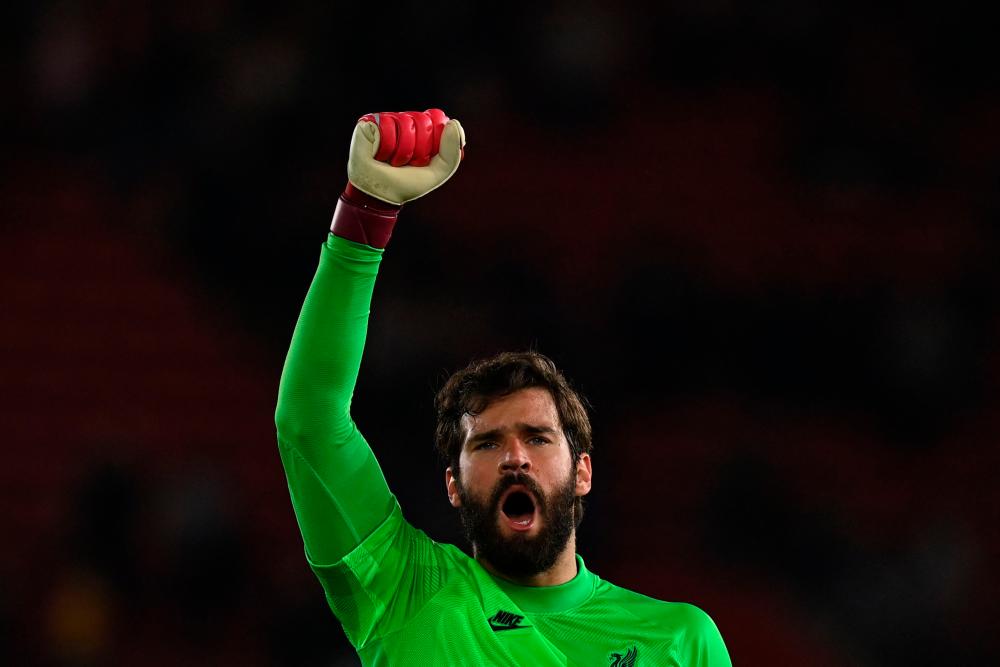 Without Alisson's prodigious contributions to the Liverpool cause, including a vital goal last season, Klopp's side would not be preparing for Saturday's revenge mission against the Spanish champions in Paris.

Liverpool's agonising loss to Real four years ago was an especially bitter pill for Klopp to swallow as his hand-picked keeper, Loris Karius, was largely to blame for the 3-1 defeat.

Klopp signed Karius from Mainz and made him first choice ahead of Simon Mignolet, but the German never convinced and his Champions League meltdown in Kiev proved the final straw.

Minutes after half-time, with the score at 0-0, Karius inexplicably threw the ball against Karim Benzema and watched helplessly as the ball rolled behind him into the empty net.

Liverpool were still in the game at 2-1 down with seven minutes left, but Karius then fumbled Gareth Bale's long-range shot into the net to seal Real's victory.

Just weeks later, Klopp signed Alisson from Roma for a then world-record fee for a goalkeeper of around £67 million ($84 million).

While Mohamed Salah and Virgil van Dijk have been Liverpool's most influential stars in the Klopp era, Alisson's impact cannot be understated.

Goalkeepers have always been revered at Liverpool, with a mural for 1970s great Ray Clemence adorning a house wall near Anfield.

Alisson, 29, deserves to be ranked among Liverpool's all-time greats between the posts and Klopp has no doubts about his quality.

“Alisson Becker is the best goalkeeper in the world for me,“ the Liverpool boss said earlier this season. “There are top goalies out there but this keeper is insane.

The Brazilian's fingerprints are all over some of Liverpool's biggest moments in recent years.

Just months after his arrival on Merseyside, Alisson made a phenomenal stoppage-time save against Napoli in December 2018.

Heading into their final Champions League group stage match, the Reds knew only a win with a clean sheet or victory by two clear goals would secure progression to the knockout stages.

But, as Liverpool clung onto a one-goal lead, Napoli's Arkadiusz Milik looked certain to send them crashing out when he found himself one-on-one with Alisson.

However, the goalkeeper produced a wonderful stop with his feet to earn a spot in the last 16, moving Klopp to say: “If I knew Alisson was this good, I would have paid double. The save he made, I have no words for that.”

Liverpool went on to win the Champions League that season, beating Tottenham in the final to give Alisson the first major prize of his career in Europe.

A year later Liverpool won the Premier League, becoming English champions for the first time since 1990, with their goalkeeper again a model of consistency.

Klopp's men struggled to defend the title and were battling to secure a Champions League berth when Alisson produced a dramatic intervention against West Bromwich Albion in May 2021.

Liverpool were drawing 1-1 at the Hawthorns with seconds left when Alisson jogged forward and nonchalantly headed Trent Alexander-Arnold's corner into the net for a remarkable winner.

Coming just three months after the tragic death of his father, he saw the goal as a moment of divine intervention.

“I’m too emotional” Alisson said. “I’m sure he is celebrating with God at his side. God placed his hand on my head.”

Alisson has been no less imperious this term during Liverpool's chase for an unprecedented quadruple, a quest that was ended on Sunday when Manchester City pipped them to the Premier League title.

He had 20 league clean-sheets to his name this season and saved Mason Mount's effort in Liverpool's recent penalty shootout victory against Chelsea in the FA Cup final, paving the way for Kostas Tsimikas to score the winning spot-kick.

Should Liverpool be crowned European champions for a seventh time this weekend, it would be no surprise if Alisson delivers another signature moment.-AFP