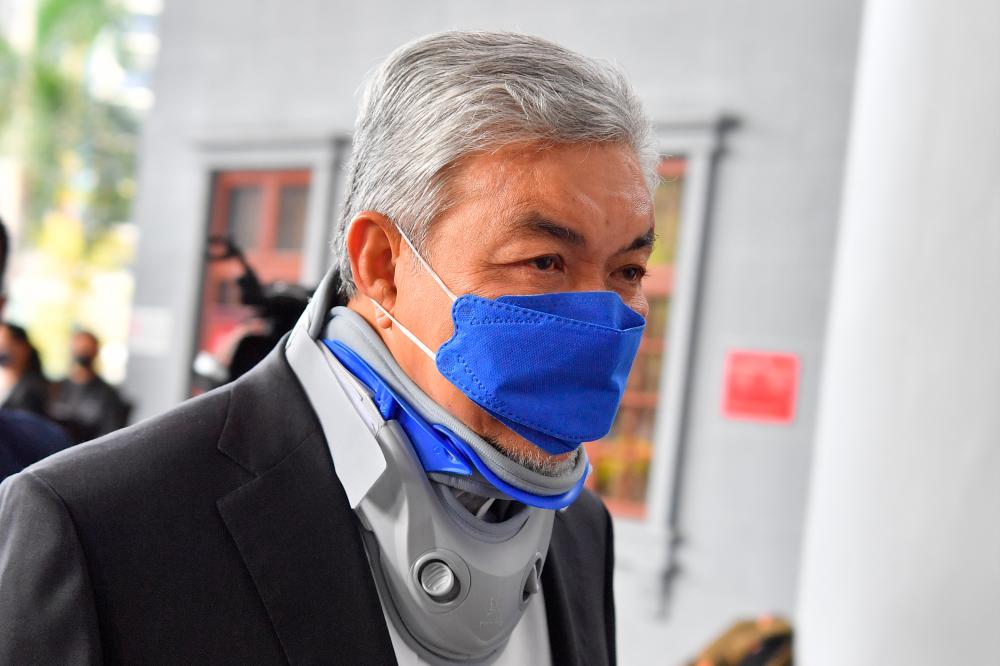 KUALA LUMPUR: The High Court was yesterday told that the spending habits and shopping spree at luxury goods outlets by Datuk Seri Dr Ahmad Zahid Hamidi(pix) and his wife Datin Seri Hamidah Khamis using their own credit cards should not be brought up by the prosecution as it was irrelevant in the former deputy prime minister's corruption case.

Counsel Hamidi Mohd Noh, representing Ahmad Zahid, said the defence strongly objected to the use of irrelevant facts mentioned by the prosecution because this was a very prejudicial statement.

“The spending habits of the accused being brought into play is not relevant. We must discredit that evidence, especially that part which she (deputy public prosecutor Datuk Raja Rozela Raja Toran) had said in court. She played it up and at the end of the day, it was reported in the news.”

Hamidi said this in his submission at the end of the prosecution's case against Ahmad Zahid, who is facing 47 charges of criminal breach of trust (CBT), corruption and money laundering involving Yayasan Akalbudi funds.

The lawyer asked the court to not take into consideration the spending habits which he said, had no relevance at all in the case.

Last month, Raja Rozela told the court that Ahmad Zahid and his wife had used over RM1.3 million in Yayasan Akalbudi funds to pay for the credit card charges on shopping at luxury stores like Giorgio Armani, Louis Vuitton and Hermes, in just two years.

Hamidi further submitted that Ahmad Zahid should not have been charged in court, instead, the culprit was his former executive secretary, Major Mazlina Mazlan @ Ramly.

The lawyer said Mazlina was not a ‘scapegoat’ in the case, instead, Mazlina, the 90th prosecution witness, was the cause of the prosecution against his client.

The defence had previously argued that Mazlina was not a credible witness based on her inconsistent representations of fact, her frailty in recollecting and describing events of the past, and her demeanour during the cross-examination.

In this regard, the defence argued that the prosecution was mistaken in assuming that Ahmad Zahid intended to make Mazlina a 'scapegoat' for the offence he committed.

Hamidi also said that it was not fair for the prosecution to describe Ahmad Zahid as the ‘boss’ in Yayasan Akalbudi or had control of the foundation or had dominion over its board of trustees as the bosses were three of them (board of trustees).

He also mentioned that Ahmad Zahid was the main funder of Yayasan Akalbudi and the prosecution also acknowledged the accused was the main founder of it.

To this, judge Datuk Collin Lawrence Sequerah said: “Even though the accused is said to be the main funder of the Yayasan (foundation), still the payments must be made in line with the objectives of the Yayasan.

“Even if the majority of funds or all the funds come from one person, it doesn’t mean the payments can be for all sundry purposes.”

Ahmad Zahid, 68, faces 47 charges with 12 of them involving CBT, eight on corruption and 27 on money laundering, involving tens of millions of ringgit in funds belonging to YAB.

The hearing before Justice Sequerah continues on Nov 29.-Bernama